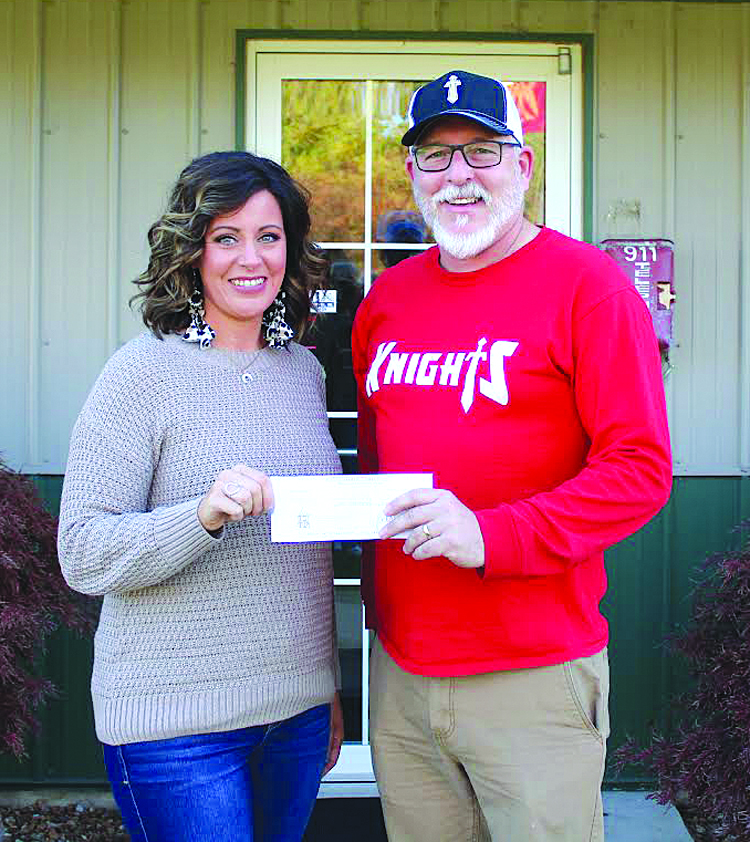 Andrea Wierman accepts a donation of $5000 on behalf of the ALAH Athletic Boosters from Jason Yeakel, of the ALAH Alumni Association. Jason, along with Shelly Brough, Matt McCarthy and Tiffany Yeakel have been in charge of the annual Alumni Association Golf Outing held on Homecoming weekend for the past two years. The funds were raised from the outings held in 2020 and 2021. The golf outing has been held for 26 years with the proceeds going to the Athletic Boosters.

The Arthur Lovington Atwood Hammond Athletic Boosters work behind the scenes to help our schools and support the athletic department.

The boosters help in many ways such as assisting in the buying of new uniforms, providing hot dogs and lemonade at scrimmages and bonfire, giving out senior posters at the end of the year, assisting with meals for away tournaments, providing referees with dinner during football season and providing a hospitality room during volleyball season.

Money is raised for all these projects from the above-mentioned golf outing and concession stand; selling shirts; through 50/50 raffle tickets at football, basketball and volleyball; and other raffles.

Plans for future fundraisers are to have a couples night glow bingo and a 5K race on the Saturday of Strawberry Jam as well as sell pop its with the Knights logo. Pop its are a ‘fidget’ toy that are akin to popping bubble wrap and have become quite popular with kids.