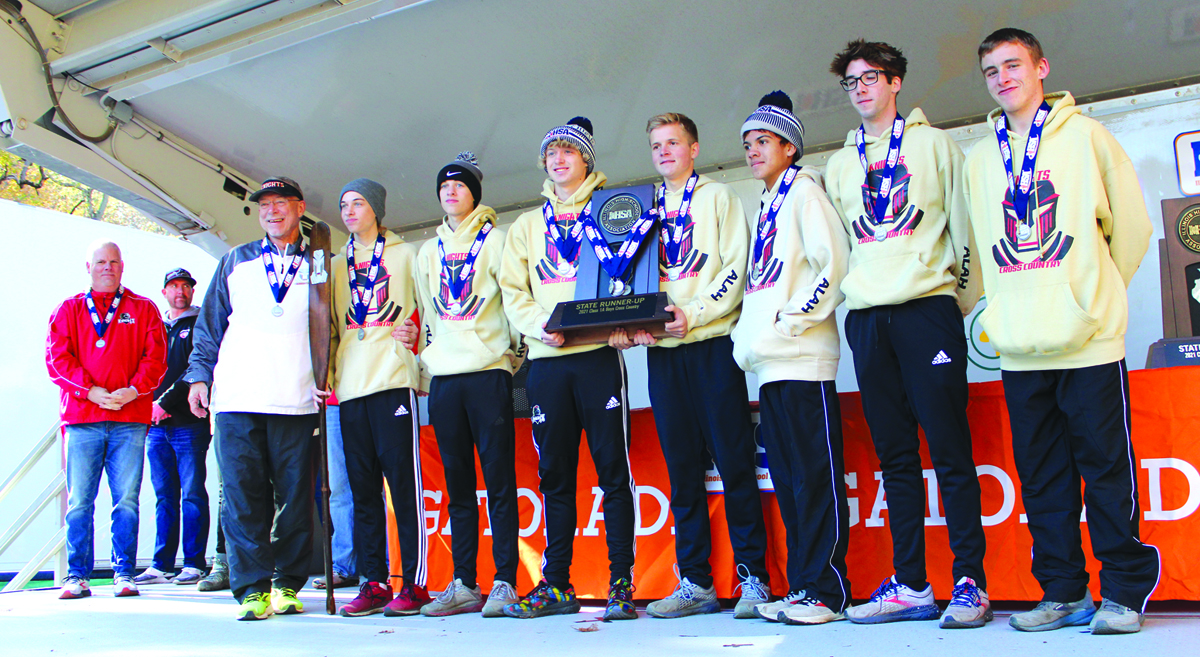 The ALAH Knights cross country team brought home the I.H.S.A. State Class 1A Runner Up Trophy for their second place finish in the State meet. Pictured here with their team medals on the awards platform are from left to right: Coach Lyle Dorjahn, Jacob Adcock, Lyle Adcock, Logan Beckmier, Jace Green, Jesus Corona, Jacob Duzan, and Steven Edwards. On the far left is Superintendent Shannon Cheek who along with Principal Steffanie Seegmiller and Athletic Director Nathan Seal were also presented with medals. The Knights finished with 172 points behind state champs Chicago Latin, 165 and ahead of Chicago DePaul College Prep, 186. The top three teams received trophies at the meet and there were thirty teams that scored in the meet.

The team traveled to Peoria on Friday and took advantage of an afternoon practice session on the venerable course tucked along the Illinois River. A meal of delicious varieties of pasta was followed by a trip to Bass Pro Shop for bowling and window shopping.

After watching the ladies from neighboring Unity HS win the 1A girls event, the Running Knights assembled in starting box 8. A mass of 260 runners flew down the ¼ mile straight before making the first turn toward the half mile mark. The mile mark was passed in a blazing 4:40 with familiar foes Ryder James and Drew Rogers in the lead. The future Mizzou Tiger teammates would finish 1st and 2nd with James running the second fastest 1A time in history to secure the win.

The race for the team championship was even more compelling as pre race favorites St. Joseph- Ogden, Chicago Latin, Chicago Depaul and Normal U High found that ALAH came to play ball!

With Logan Beckmier again leading the charge, the Knights found themselves in the trophy hunt at both the 1 and 2 mile scoring pads, trailing only Chicago Latin at each interval.

With a half mile to go Beckmier made a surge to secure All State honors finishing 13th in a personal best of 15:20.73. Jace Green powered his way to run a PR as well finishing just out of an All State slot running 28th in 15:45.68.

Jacob Duzan continued his incredible end of season improvement dropping a near 40 second PR to run 16:43.85 to finish 123rd overall and be the 5th ALAH scorer.

Even with Chicago Latin placing 2 runners in the top 10, the Cook County powerhouse could only eek out a 7 point advantage over our local harriers.

Though ALAH was in the pre meet conversation as potential trophy candidates, most were looking for the more established cross country power programs to march to the podium when the awards were handed out. The Knights prevailed to haul the 2nd place trophy back to Douglas County.

This team has established itself as a force in the Class 1A conversation state wide. This season included a certain level of adversity with injuries and distraction but the guys remained resolute in their improvement and goals. Hard work and focus were rewarded on the awards stage post race at Detwiler.

Several observers noted that ALAH was the only public school in this year’s top 5 team finishers and along with Normal U High, the only downstate schools. ALAH was ahead of Depaul with the Normal contingent 4th and Rockford Christian 5th. The Knight’s sectional foe SJO finished 6th with Benton, Olympia, Pinckneyville, and Monticello rounding out the top 10.