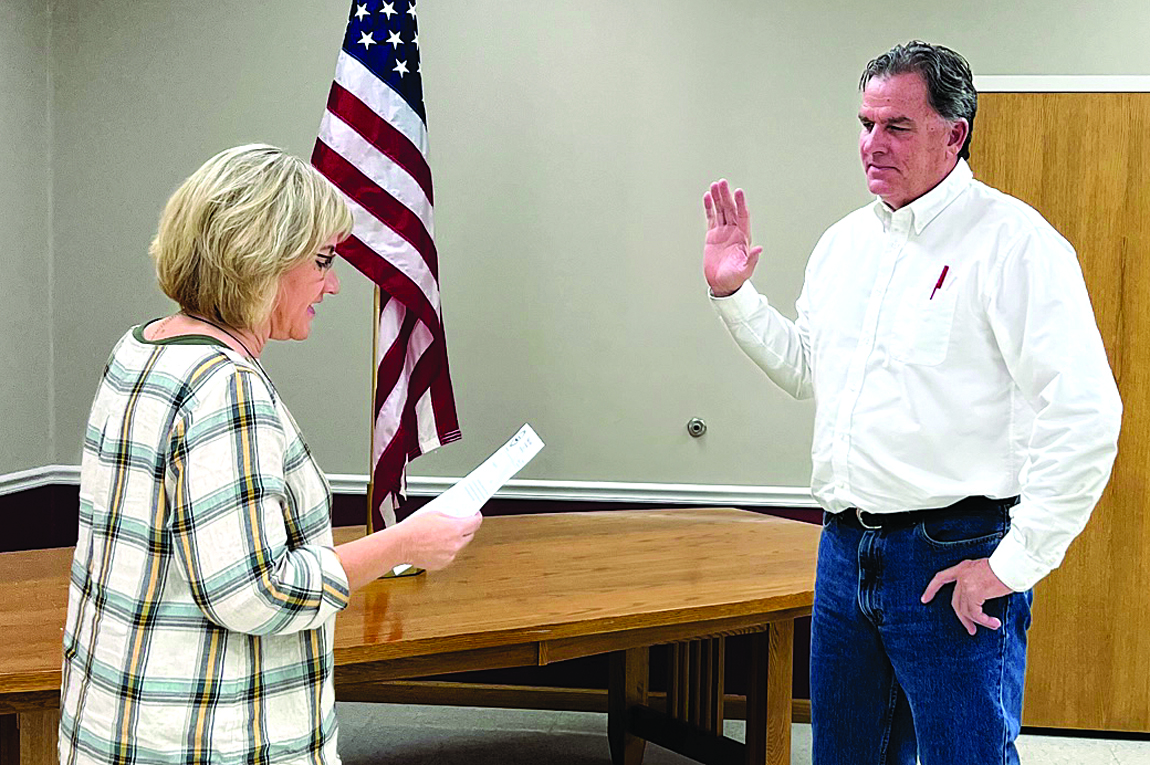 At the opening of the November 1 Arthur Village Board meeting, new trustee Todd Dukeman was sworn in. After his swearing in the board began business by meeting with the Simply Arthur Board.

Simply Arthur is responsible for tourism, economic development in Arthur and staffing the Welcome Center every day except on Sundays. The board was formed after the passing of Bob Doan.

Recently, the board is trying to decide where to go as they move forward since Executive Director Christy Miller has stepped down from her position.

The board has been discussing whether they will be finding someone else to take over as Executive Director or if they will create another role, etc.

Simply Arthur scheduled a meeting that Monday evening to find out what ideas that the village may have, what they would like to see them doing or if board members had any comments about what they had done previously in the past.

“The municipality is open for anything that we can do to help. We have helped with housing and we also have the TIF district, but we don’t have a concentrated effort towards economic development,” commented Mayor Rod Randall. “I feel that is something we should do more of,” he added.

“We were doing services for investment purposes, maybe more than we wanted to do. I think we are open to get back to reconnecting the village and the area. We definitely have made an effort to retie the gap that has been there for some reason or another,” said Simply Arthur President Kenny Crossman in response.

“The volunteers we have are very good. The Welcome Center wouldn’t run without our volunteers,” responded Crossman. “It was useful to have someone there to answer the daily calls and take care of the questions each day, etc, although our organization solely relies on the employee part of it,” he then added.

Former executive director Miller stepped in to offer her input. “We backed off on volunteers during the remodel and then due to COVID, the Welcome Center was completely shut down. When we brought Angie (Parsons) as Communication Director, it was just hers, and there weren’t any volunteers because they were trying to keep things safe and everything sanitized. We are slowly bringing back volunteers. Paid personnel would offer more business responses where volunteers may offer their opinions, etc.. Although we have appreciated our volunteers and can’t do a lot without them,” she stated.

“The organization wouldn’t exist without the personnel,” Crossman also said.

“How do you plan to fund that position (Executive Director)?” asked Randall.

“We will continue to work together to try to find out what is the best investment. Could that be a one person job? We aren’t in a hurry to fit a person to the role. There is no role. We are going back to square one. Will be working on trying to decide exactly where we want to go, etc,” replied Crossman.

“Whatever the Village Board decides to do, there needs to be a point person for the organization. There needs to be a clear path on the right way to go and who can help,” stated Scott Seegmiller, who is in charge of business advocacy for the Simply Arthur board.

Board members of Simply Arthur decided they would think more about what the needs were of the village and then later would meet with the Village of Arthur board members once again at a later date.

After speaking with Simply Arthur, the board moved forward with their agenda.

Treasurer Mike Hilgenberg reported $53,629.93 in expenditures. Some of those expenses included paying interest on a bond, website costs, and the purchase of meters for water and sewer.

Randall reported that he received an official letter from the Secretary of State that the population of Arthur was officially 2,231 people. He also informed the board that he signed the final papers for the IEPA for the sewer loan. They received over $350,000 in loan forgiveness which calculates to a little over $100,000 per year that the village will be paying back.

Matt Bernius commended the sports teams at the high school. “They have had a lot of success – our cross country team, girl’s volleyball and football,” he said.

Chief Goodman reported that on November8 at 9:00 am he will be having the D.A.R.E graduation for the fifth grade students at Lovington Grade School. He had been coordinating with the Lovington Police Department.

Grant Corum of Public Works stated that he and his crew would be spending the next couple of weeks getting ready for winter and had plans to flush the hydrants on November 9 and 10 since they had to reschedule because of weather related issues. He also told the board that the street sweeper is up and running again.

For new business, the board approved the final plans for the Arthur Homes Project from Mike Sullivan of CSI Services. Weather permitting, there were some possible plans to do some infrastructure work. Randall informed the board that representatives from their insurance would be present at the next meeting to speak about risk management.