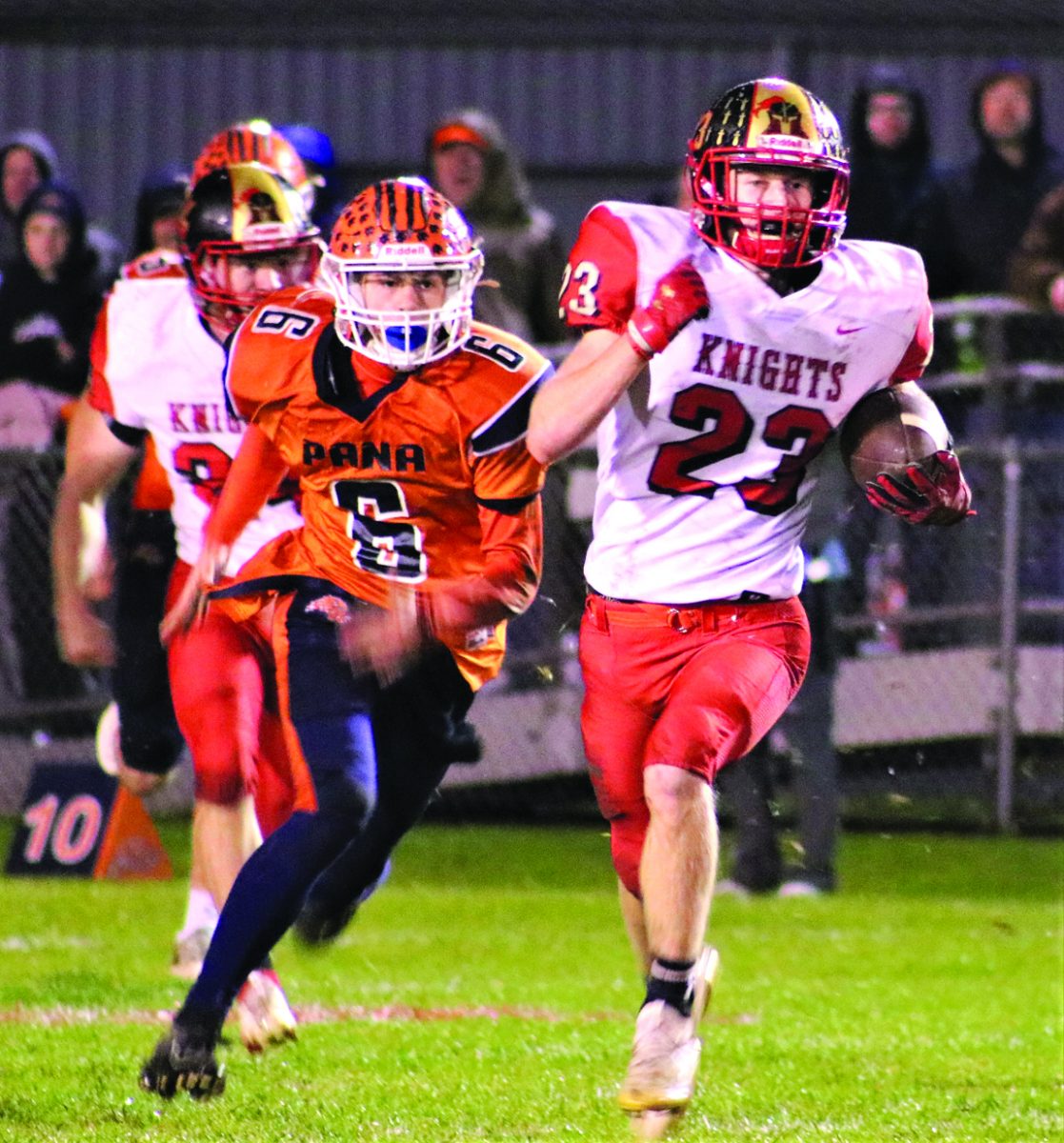 Pick 6 by Waldrop!!! ALAH’s Landon Waldrop #23 returns the ball after intercepting the Pana quarterback’s pass. That is the QB #6 Max Lynch attempting to catch Landon, but he would escape all would be tacklers and take the ball 91 yards for the pick 6 touchdown. Despite a couple of huge plays by the Knights they would drop the contest and their 2021 season would come to an end.

The Arthur Lovington Atwood Hammond Knights traveled to Pana for their first round 2A football playoff game last Friday, October 29. The home team received the opening kick and scored on their first, third and fifth series. Their kicker, Bo Christer would make all of his extra point attempts in the game even though some of them barely cleared the crossbar. At the 2:57 mark of the first quarter the Panthers led 21-0. Each time they scored they followed with an onside kick on each of their ensuing kickoffs trying to keep the ball away from the Knights speedy kick returner, Kaden Feagin.

After Pana’s third td they decided to kick deep. Kaden Feagin who was back deep for the return chased the ball down to the three yard line, picked up the ball and raced back across the field to the Knights’ side of the field. No one on the Panther defense could catch and he took it 93 yards down the sideline and into the end zone for a touchdown. Chilton Ingram’s kick was good and ALAH was on the scoreboard trailing 21-7 with 2:38 left in the opening quarter.

Unfortunately, Pana answered with a 60 yard td run on their first play from scrimmage on their next possession making the score 28-7 only twelve seconds later.

The Knights put together a long drive but were stopped on fourth and goal from the 7 with 6:20 left in the half.

The home team took over from there and drove all the way to the Knights’ 37 where Austin Henschen scored from there and with 2:39 remaining in the first half they led 35-7.

ALAH turned the ball over on downs on their next possession but Pana’s quarterback Max Lynch threw a pass that was intercepted by the Knights’ Landon Waldrop who returned it 89 yards for a touchdown as the clock ran out on the half. The EP kick was no good and at the intermission the score was 35-13 in favor of the Panthers.

Pana would score twice in the second half, once in the third on another td by Henschen and another with 2:06 left in the game by Monte Weddle. An attempted field goal on another series failed on a fumbled snap.

The Knights scored on a 5 yard run by Landon Waldrop with 8:52 left in the game. The extra point kick was blocked.

The final score was 49-19 in favor of the higher seeded Pana squad. They will move on to the second round of the playoffs next weekend. The Knights end their season with a 5-5 record. Austin Abercrombie, Max Allen and Quentin Day end their football careers having come a long way since their freshman year, having made the playoffs twice in those four years and having one season shortened to six games with no playoffs possible. Coach Jefferson thanked them after the game for all of their efforts during that time. The Knights return a large group of players for next year that gained lots of experience this season.

Interceptions – Landon Waldrop, 1 for an amazing 89 yard TD return to end the half!

Punts – Landon Waldrop, 1 for 4 (against strong wind, with rain)