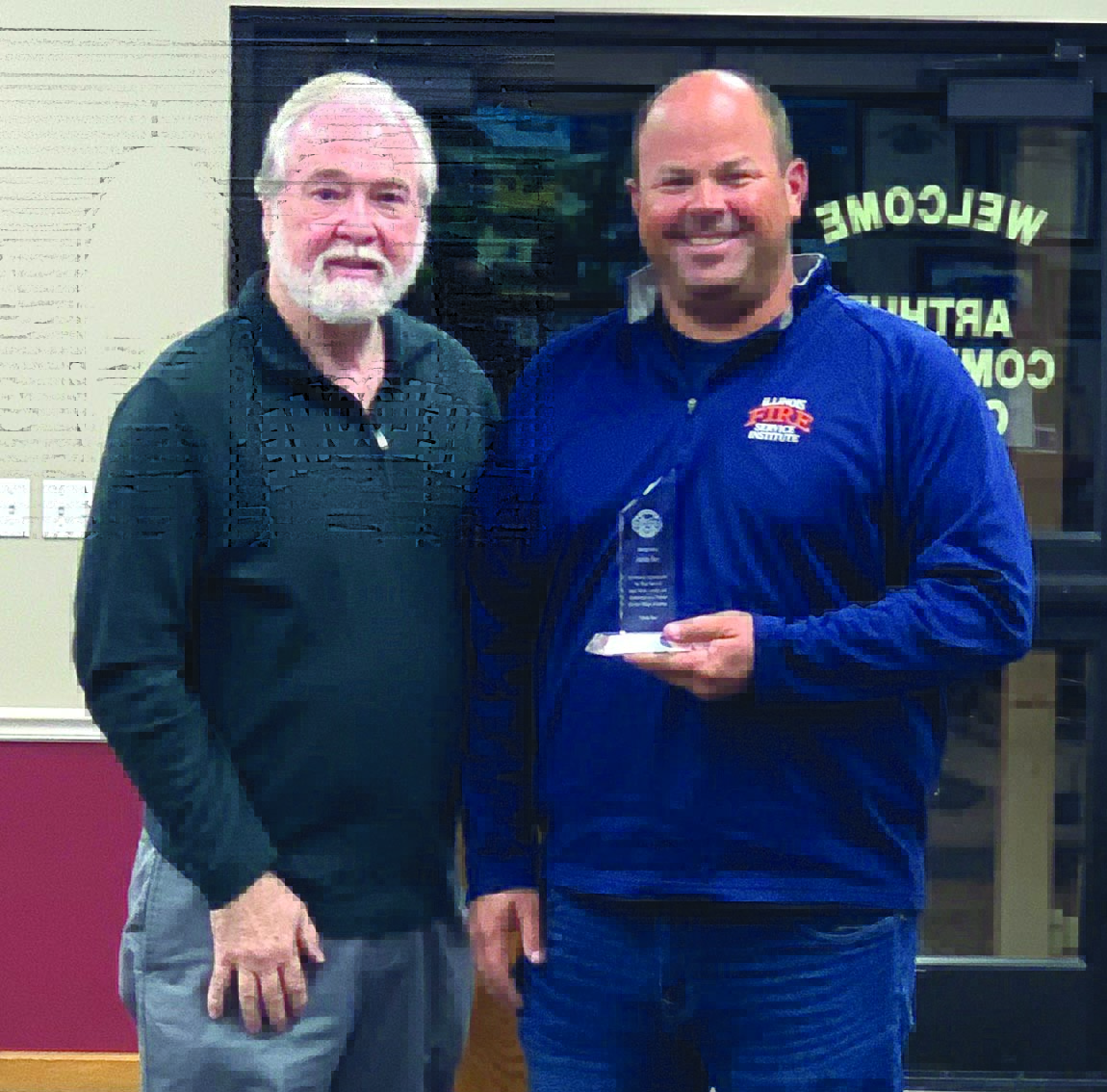 Village President Rod Randall presented Justin Ray with a token of appreciation for his committment as a public servant to Arthur.

Prior to the Village Board meeting on Monday, October 18, members took a tour of the new Wastewater Treatment Plant building on Jurgens Parkway where Trustee Grant Corum of Public Works informed the group a few things about the public water and sewer system.

Before coming to order, some members made comments about how informational the tour was and how they learned a few things that they didn’t know before.

After the discussion, board members came to order for their evening meeting. Treasurer Mike Hilgenberg reported $18,687.86 in expenditures and that there wasn’t anything out of the ordinary in expenses.

Mayor Rod Randall announced that at the November 1 meeting, the board will have the final plans for the Arthur Home’s project for approval. He commented that Mike Sullivan is currently reviewing those plans to check that they include everything that he and the board had requested.

Secondly, Mayor Randall told the board that during the first part of the November 1 meeting, there will be a discussion with the board members of Simply Arthur about economic development ideas. On October 27 in the Community Building at 5:30 pm, the Simply Arthur Board will be meeting with its major investors for their input.

Police Chief Goodman said that he has been interviewing for the open position. He noted that he would like to do a second round of interviews- panel style.

Grant Corum told the board that he and public works have been keeping busy with all the rain that we have received lately. He’s been keeping the drains open and trimming trees around the signs and obstructions. He also said that he and his crew had been keeping up with the mowing and pothole patching. Corum informed the board that the street sweeper will be going to Heartland at the end of the week and that it will take about a week to repair it. He also said that tentatively, the village plans on doing some hydro-flushing on Tuesday and Thursday.

Mayor Randall said he was approached by the Lions Club about some extra old cell phones they had. It was recommended that the phones be declared excess property so that the village could donate them to the Lions Club at a cost of $0.

Before the village board meeting came to an end, there was some discussion and action for an appointment to fill a vacancy for one of the trustees – as one of the current ones would be moving out of state at the end of October.

Mayor Rod Randall held a small presentation for the departing trustee. “Despite already having a full schedule of work and community involvement, Justin Ray accepted an appointment to fill a vacancy on the Village Board and then later successfully ran for election to the board. Justin has been a conscientious and committed public servant to this community. His input with board decisions has been valuable and appreciated and always with the best interests of this community in mind. His leaving, not only this board, but also this community, is a sad loss for Arthur, but we wish him well as he and his family set off into a new life experience.” Ray was then presented with a plaque and members of the board thanked him for his years of service and wished him well on his new journey.

Afterward, Randall made a suggestion to fill the new vacancy. “To fill the Trustee vacancy, I would like to present for the board’s approval for a person who has virtually spent his entire life in this community, spent his career involved with the business and economy of the community, and who has a deep-rooted concern for the continued well-being of this community- Mr. Todd Dukeman.” All board members voted in favor for Todd Dukeman to fill the new vacancy.