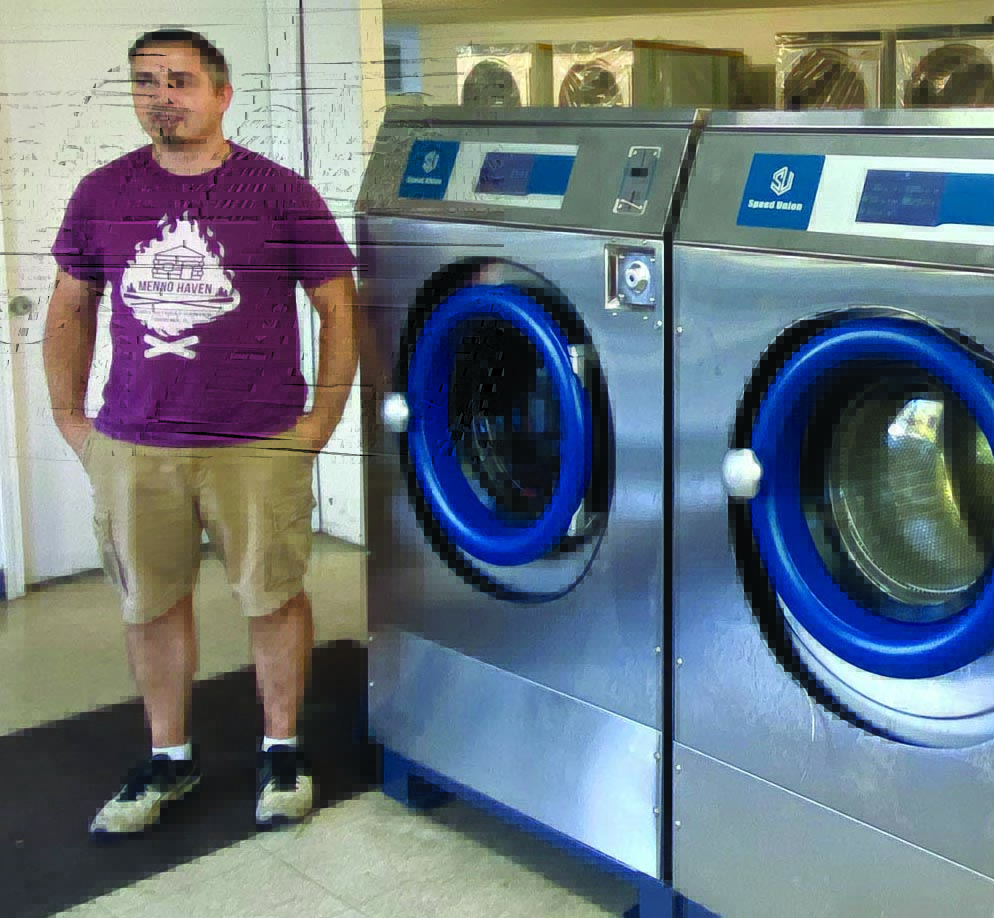 Fluffy Bubbles Laundry Service owner Jeff Marner stands next to the new machines. The grand reopening will be held October 29 and 30.

By ARIANA R. CHERRY
Staff Writer
Arthur’s local laundromat has been known by a few different names over the years. A couple of them were Arthur Coin Wash and Washing Well Laundry. It also has had a variety of different owners who have put their own vision into what they felt the laundromat should be.

These days, Arthur resident Jeff Marner and his family have taken it upon themselves to put some love and care into the building that has been there for 40 plus years. They’ve renamed the laundromat to Fluffy Bubbles Laundry Services. The Marner family purchased the business last year. Marner shared his story of how they decided to get into the laundry business.

“We had noticed a laundromat for sale in a nearby town and had looked into it. Then we decided to consider Arthur’s and check it out. When we came in, we thought it looked like it could use some love and attention. After our inquiry, we decided to go for it. We saw it as a business that we could care for and an opportunity for us. Future plans include looking into more laundromats and possibly creating a small chain of them,” he said.

“The laundry business – it serves all kinds of people. Renters tend to need it but even premium services are great for individuals with washing machines and dryers. Seasonally, most people don’t think about it. If you can’t wash your comforter in your home, you can go to your local laundromat,” Marner added.

Since purchasing the laundromat, Marner has begun to make positive changes. Some of the first changes began with adding new machines, since some of the oldest ones had been there since 1985. “We’ve added 11 new washers and 14 new dryers,” he stated. “Half of the dryers were down when we took over,” Marner mentioned. He also stated that the old ones weren’t getting used as much, so some scrappers and an electrician will be taking parts from the old dryers. The laundromat now has three 55 pound washers, four 44 pound ones, one 40 pound and four 26 pound washers. By the time Marner is finished with installing all of the new washers, there will be over 500 pounds total of wash capacity available in the laundromat. There are also about 12 different washing machines that can handle some type of bed comforter.

“There will be no more waiting to wash your comforter,” Marner noted.

With all of the new added capacity, people will be able to wash and dry their laundry in a much shorter time than they have in the past. “Assuming that all of the machines are available, for people who want to catch up their laundry on a Saturday, you can. You can have your clothes washed and dried within an hour because there will be a lot more capacity,” Marner informed. He also said that he is making some cosmetic changes to the walls. “It will look dramatically different, but not a huge difference from a practical standpoint,” he said.

One issue that can be difficult to combat when running a common area where members of the public will frequent is keeping it clean. “One of our biggest problems has been keeping the dryer sheets off the floor. If people could just pick them up when they are finished, that would help a lot,” Marner voiced. “If people come into a place to clean their clothes, they need a clean environment. You don’t want to have to question if your clothes are clean when you are done,” he said. The laundromat is cleaned and spot cleaned daily. “The only day that it isn’t cleaned is probably on Sundays. It can look pretty rough come Monday morning,” Marner added.

Another way that Marner has combated the daily mess is removing the candy vending machines. “Removing the vending machines has led to a cleaner environment. We no longer have the mess of crushed candy on the floor and everything.” Although Marner did state that they still offer vending machines with cold soda, dryer sheets, fabric softener and washing detergent.

Marner is also taking everyone’s security into consideration. There are security cameras and multi-directional mirrors on the ceiling- another reason to clean up after you have completed your laundry.

For anyone who is looking to avoid crowds, Marner stated that the best time to do your laundry is on Tuesdays, Wednesdays and Thursdays. The third shift also has plenty of room. The laundromat is open 24/7 to accommodate anyone’s schedule. Marner also insisted that if anyone has any problems or concerns to please reach out to him immediately (there is a sign with a phone number inside the laundromat). “If I can serve a person immediately, then it can help the next customer as well. This way, we can get the problems taken care of right away,” he said.

Not only can a person come to the laundromat and do their laundry, Fluffy Bubbles Laundry Services will also be offering drop off and pick up laundry services. “We also will deliver as well,” Marner added. The service will include washing, drying, folding and delivering (if needed) of your clothes. For more information and rates about this service, you can contact 217-606-4343.

Marner stated that since taking over the business, he has enjoyed interacting with people, even if it hasn’t been under the greatest of circumstances. “It has been enjoyable to serve and get to know people,” he said warmly. Marner has also used revenue from the laundromat from a day or a portion of the revenue for a specific period of time for fundraisers. Most recently, he was able to use revenue to help specific individuals with medical expenses.

The laundromat will be closed for renovations and machine change-over from October 26-28. Then on Friday, October 29 and Saturday, October 30, there will be a grand re-opening of the laundromat and Fluffy Bubbles Laundry Services. On both days from 8:00 am to 8:00 pm, there will be free drying with your wash and drawings will be held for a free wash. Refreshments will be served on Friday. Marner encourages everyone to follow their Facebook to stay updated on specials and events: https://www.facebook.com/FluffyBubblesLaundry