The Village of Arthur held a public hearing on October 4 at 6:45 pm before their regular meeting to report outcomes and provide interested parties an opportunity to express their views on the program activities and performance of the Community Development Block Grant (CDBG) Downstate Small Business Stabilization (DSBS) grants funded through the Illinois Department of Commerce and Economic Opportunity.

The village applied for the grant last year during the COVID Pandemic. Businesses who qualified and could apply for the grant were reached out to and given information about the grant.

One qualification that businesses had to have was that they had to have one full time employee outside of the business owner.

This qualification restricted many of the businesses in town and they were unable to apply.

With that qualification, it left two businesses who were eligible. After application, Villa Enterprises was awarded the grant in the amount of $20,000. The state issued the money and then the village gave them a check. After the reported information, the hearing was closed.

At 7:00 pm, the board opened up their regular meeting. Treasurer Mike Hilgenberg reported $100,505.15 in expenditures.

Mayor Rod Randal reported that he had heard many residents complain about the signal from Verizon Wireless lately.

Erica Carter said that they had called the company many times and they provided her with the usual routine help as always – “shut off your phone, reset it, etc). She also had emailed them, but didn’t receive any additional assistance.

Verizon reported to her that they had no troubles on their end.

Randall and other board members suggested that residents begin calling Verizon with their complaints. If there were enough complaints, perhaps the situation could be looked into. There is a lease for the land that the tower currently sits on. It was suggested that the village mail a letter to the person who leases the tower and inform them about the signal issues. If there is enough pressure put on them, then it could be suggested to not renew the lease until the signal improves.

Matt Bernius commented that he had been seeing a lot of golf carts driving down the streets that were loaded with extra kids and passengers who were not wearing seatbelts. He stated that everyone who is riding in the golf cart needs to be wearing a seatbelt. He had been seeing kids hanging off the cart while in drive. It was also noted that some people had seen carts driving down highway 133. Golf carts are to only cross the highway and not ride down them. Chief Goodman said he and his department would keep more of an eye out to those who are violating the rules for driving and riding in golf carts. They should be treated like cars – everyone who rides in them should be wearing a seatbelt.

Grant Corum of Public Works informed the board that the street sweeper is presently broken down. It will cost about $3,000 to fix it and it will be three weeks until it can be repaired.

Erica Carter reported that the Arthur Parks Department has set Trunk or Treat for Saturday, October 30 from 3:00 – 5:00 pm at Eberhardt Park. There will be trick or treating only – no games or anything else.

During the new business discussion, board members spoke about the property and possible sale of village-owned property at 528 N Vine Street in Arthur. The property used to be a car wash years ago, and has stayed vacant for quite some time.

Graham Vet Clinic is looking to expand and is hoping to add a state of the art facility. They would like to use the entire lot. Doing this would allow them to add two or three more people to their staff. The clinic has also hired another full time vet.

Currently, there are three full time veterinarians – making a total of nine employees. The clinic has continued to serve customers who drive from out of town.

The village is looking at this as an opportunity that would bring more jobs and business to Arthur. “I think it is a worthwhile project,” commented Mayor Randall. The property was appraised for $35,000. Board members suggested that the property could be sold at 80% of its appraised value. Doing this would also mean opening up another spot for business where their current clinic sits now.

Graham Clinic would only like to expand once and not have to do it again.

The vote to sell the property was tentatively approved pending the design needing approval as well as the time table. 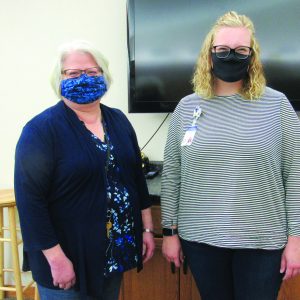