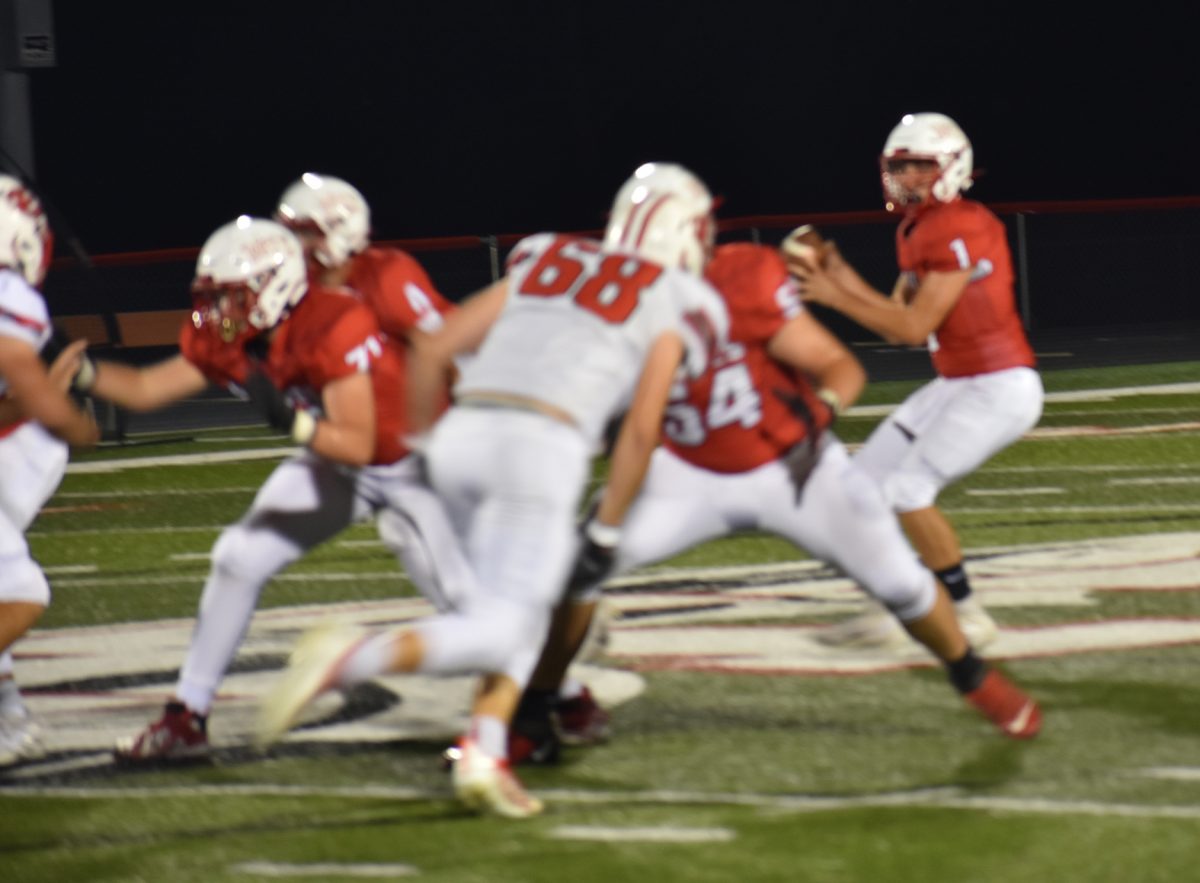 Tyson Evans looks to throw in a 28-27 loss against Effingham at home on October 1.

The Mt. Zion football faced adversity in its game against Effingham when it came to key players getting injured, but found a way to stay in the game and compete to win. The Braves would lose their first game at home in a 28-27 loss against the Effingham Hearts in Apollo Conference football action.

“Tough game, their kids are well coached. We knew that coming in and we knew their kids are physical and strong and their coach does a good job,” Head coach Patrick Etherton said. We knew that we had to make some plays and we’d have to get some stops defensively to be in it and we knew that we had to take care of the football and not turn it over and if we could do that we’d have a chance at the end and lwe didn’t make enough plays at the end of the game and it is what it is.”

The Braves failed to score on their first two opening drives. The Hearts relied on their power running back John Westendorf and running back Keegan Baker from the start. In the first quarter Westendorf, Baker and the Hearts carried the ball up the field and then Westendorf rushed in for a 14-yard touchdown and the extra point was good to give the Hearts a 7-0 lead.

Early in the second quarter, Westendorf rushed in for his second touchdown of the night for an eight-yard rushing touchdown and the spectra point was good to give the Hearts a 14-0 lead.

The Braves’ offense received the ball back and didn’t waste any time starting their comeback. Braves’ quarterback Tyson Evan fired a pass to a wide-open Christian Keyhea who ran the ball in for an 87-yard touchdown. Brayden Traxler nailed the extra-point to narrow the Hearts lead to 14-7.

Four minutes later, Keyhea struck again. The Braves’ offense marched down the field and Keyhea received a handoff and found some space on the outside to score a six-yard rushing touchdown. Traxler’s extra point was good and the Braves tied the Hearts 14-14.

Later in the second quarter, the Braves offense found another way to score. This time it came from Adam Lutz. Lutz found his gap and rushed in for a 34-yard rushing touchdown. Traxler’s extra point was good to give the Braves a 21-14 lead.

Midway through the third quarter, the Hearts relied on Westendorf once again to move the chains and score. Westendorf scored his third touchdown at the end of the drive by taking the ball up the gap and recorded a three-yard rushing touchdown to tie the game at 21-21.

The Braves responded with the passing ability of Evans. Evans fired a pass to a wide-open Chiron Petty that Petty ran in for a 46-yard touchdown. The Braves went for a two-point conversion that was not successful, but the Braves led 27-21. Evans finished the game with two passing touchdowns and 305 passing yards.

Early in the fourth quarter, Weatendorf scored his fourth touchdown of the game. This time Weatendorf rushed the ball in for a nine-yard rushing touchdown to give the Hearts a 28-27 lead. Westendorf finished the game with 130 rushing yards.

The Braves offense failed to score on their next possession, but were close. The Braves had a passing play that landed inside of the 10-yard line, but turned the ball over.

The Braves defense found a way to shut down the Hearts running offense. The Braves forced the Hearts into no-gain rushes and incomplete passes to get the ball back.

The Braves’ offense moved the chains and the football up the field. With three minutes left, the Braves found themselves inside the 20-yard line, but couldn’t get the score they needed. On fourth down and five yards to go for a first, the Braves sent in Traxler and the kicking team to go for the field goal attempt. The attempt was no good and gave the Hearts the ball back.

The Hearts ended the game by running off the clock and kneeling.

The Hearts improve to 3-3 on the season. Their next game is against Lincoln at home on Friday at 7 p.m.

The Braves fall to 4-2 on the season. Their next game is on the road against Collinsville on Friday at 7 p.m.

They (Collinsvile) have almost 2000 students and I’m sure they’re probably 6-0 at this point and ranked in the state ,” Coach Etherton said. “ That’s what we want to see schools like that and want to challenge our kids. We want to see those big schools that are fast and physical. It should be a heck of a challenge for us and we go play on the road and if you want to make it in the playoffs you’re gonna go somewhere and you have to win games like that. You got to take trips like that. So, we’re looking forward to it. It’s gonna be a big challenge for our kids.”