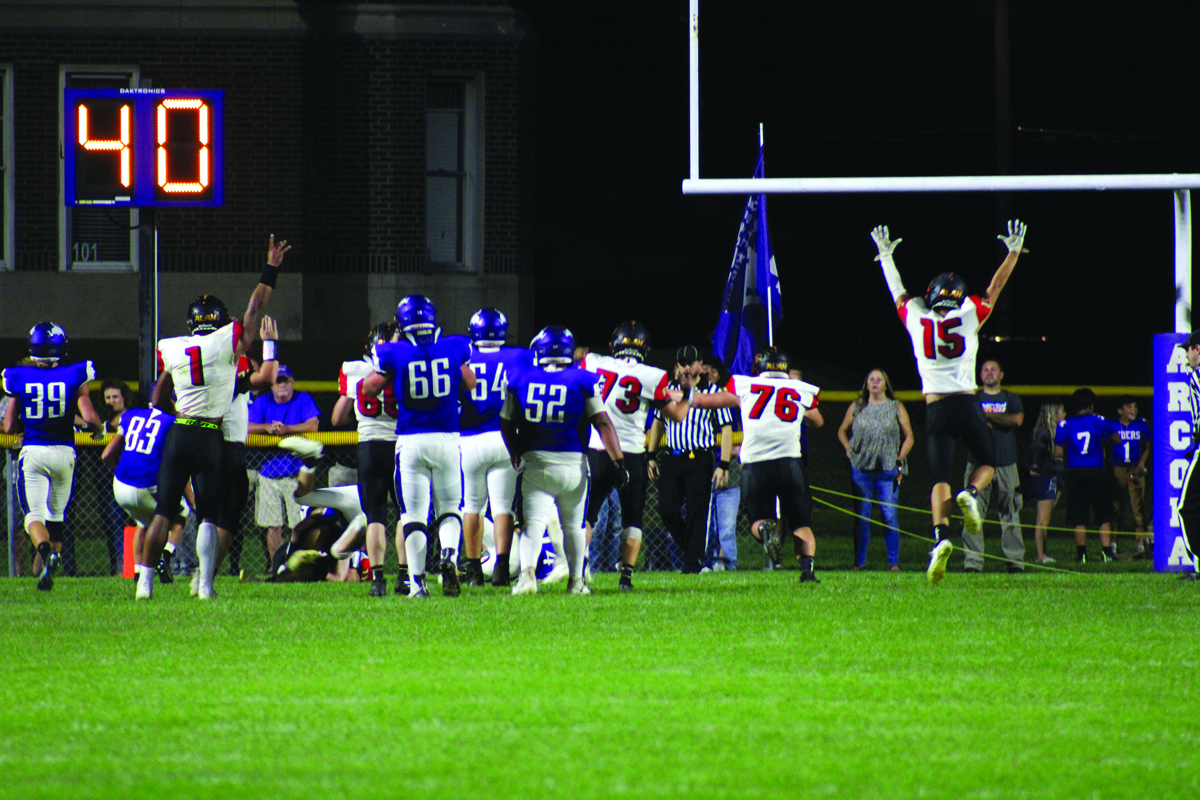 In the back of the end zone, on the ground is tight end #11 Drew Cotton after catching a touchdown pass from quarterback Kaden Feagin for the Knights’ second score in the game at Arcola last Friday night. Celebrating the td are #1 Kaden Feagin, #66 Tanner Beckmier, #73 Bobby Schanuel, #76 Caleb Corum and #15 Noah Garrett. Kaden was 9 of 23 passing for 94 yards and 2 touchdowns.

The first half of the game was played fairly even except for an Arcola touchdown at the end of the half.

ALAH received the opening kickoff and went on a long drive to start the game, starting at their own 20. Six running plays by Kaden Feagin, one by Landon Waldrop, mixed in with a couple of pass plays to Jayce Parsons and Drew Cotton got the ball to the Rider 27 where QB Feagin hit Parsons on a 27 yard touchdown pass. Chilton Ingram’s extra point kick was good and the visitors were on the scoreboard first with a 7-0 lead. The Knights had managed to run just over six minutes off the clock.

Arcola went three and out on their first series as did the Knights on their second.

Arcola would then do what the Knights did on their first possession, go on a long drive that ended with a 14 yard touchdown run by QB Beau Edwards. The kick by Kareem Trejo was good and the score was knotted at 7 with 10:23 left in the half.

The Riders intercepted a Feagin pass at their own 25 and a couple of plays later, Austin Kutz hauled in a 22 yard td pass from Edwards. With the Trejo kick the home team led 14-7 with 7:40 remaining.

The Knights fumbled the ball on their next series but again the defense stepped up and forced a Rider punt.

After a Jayce Parsons return, ALAH started at the Arcola 39. They moved the ball down to the 11 where Feagin hit tight end Drew Cotton for an 11 yard score. After Ingram’s kick the game was tied again at 14 with 23.1 seconds to go in the half.

With not much time left, the Riders took advantage of their passing game. After a Jed Jones run of 18 yards, Edwards connected on a 26 yard pass to Tanner Thomas and then capped it off with a 23 yard td pass to Thomas. Trejo’s kick gave the Riders a 21-14 halftime lead.

The second half was all Riders and the scoring started with the third quarter kickoff. Tanner Thomas returned it for a touchdown and Arcola led 28-14 with just 14 seconds gone in the third.

The Knights’ defense allowed only one touchdown in the second half, a 57 yard run by Edwards. Arcola would also score on a safety, and two interceptions for tds making the final score 51-14. The turnovers by the Knights kept them from mounting any kind of drive offensively.

The Knights return home next Friday, October 8 for the annual Homecoming game. Their opponent will be the Sangamon Valley Storm. Come out for all the festivities and see the Knights in action.

From Coach Ryan Jefferson on the Knight Pride facebook page, “The scoreboard final did not represent the type of game we played – those that were there know how well we played! Lots of things we can fix in these last 3 weeks to become playoff eligible! Time to gear up for a back-to-normal HOMECOMING WEEK!!”