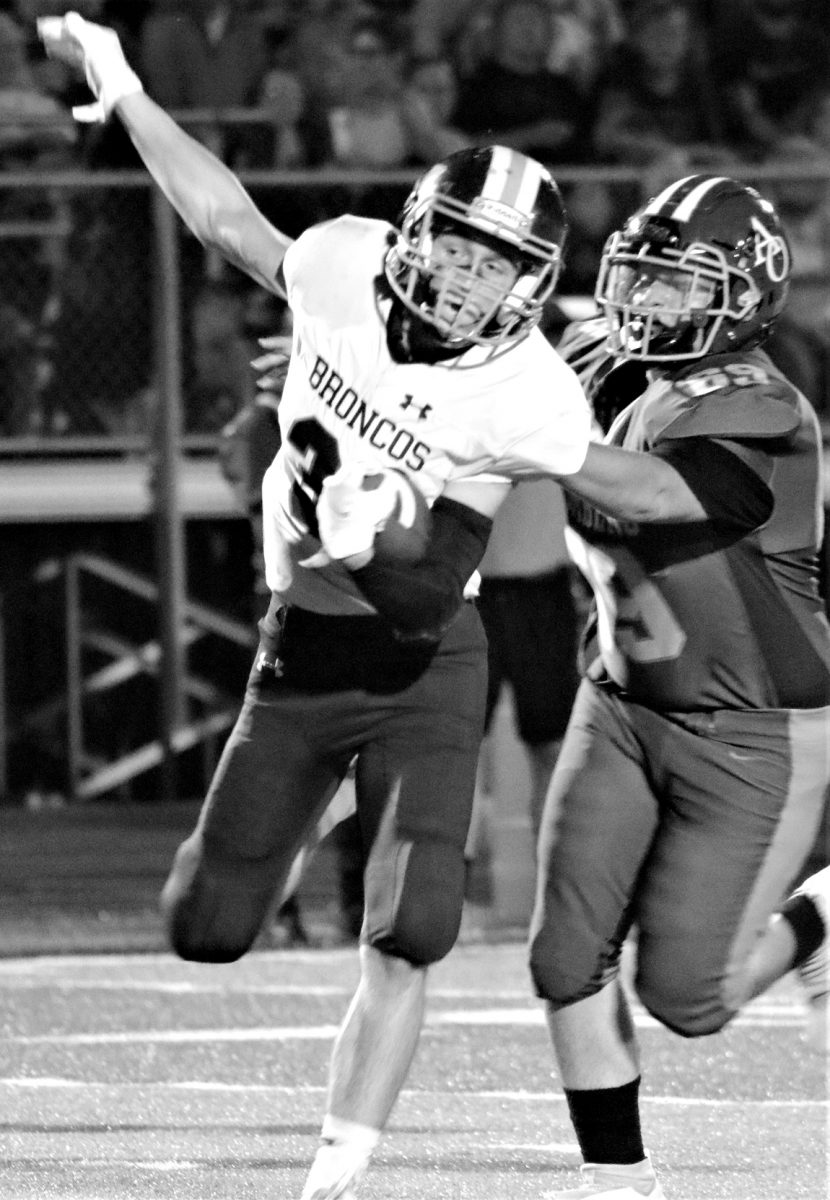 CGB outstanding running back Cody Layfield (31) breaks the grasp of A-O outside linebacker Jaymze Binkley (#69) on this 44-yard touchdown run in the first quarter. Layfield put the Broncos on top 14-0 with two scores in the first 6 minutes of the game.

The Cerro Gordo Bement Broncos traveled to Argenta-Oreana on Friday evening to take on the Bombers in an LPC matchup on a warm fall evening.

On the ensuing kickoff, the Broncos scored on their first series of the game running only three plays before Cody Layfield ran it in from 7-yards out with 10:10 to go in the first quarter making it 7-0.

Following A-O turning it over on downs, the Broncos once again scored on Layfield’s 44-yard run making it 13-0 as the extra-point attempt was missed at the 6:31 mark in the first quarter.

The Bombers unable to put any kind of offense together turned the ball over and this time CGB scored on a 14-yard pass from Colin Warren to Ian Bettinger with 40 seconds left on the clock in the first quarter making the score 20-0.

With 6:27 left in the second quarter, this time it was Spencer Sterling scoring for the Broncos from 7-yards out putting CGB up 27-0.

Argenta-Oreana’s Tyson Oros pass was intercepted by Chance Young late in the second quarter as the Bombers still struggling to get anything going offensively.

Before the break, CGB would turn the ball over on a fumble and score one more time as Spencer Sterling once again got the call and ran it in from 37-yards out as the Broncos took a commanding lead 33-0 at the halfway mark.

After the intermission Layfield scored on their first possession with 9:39 left in the third and Chance Young scored the final touchdown on the night to make the final score 47-0.

The CGB Broncos will be at home this Friday night as they host the Arcola Purple Riders starting at 7:00 p.m.