Evan Griffifth shields the ball in a 7-0 win against St. Theresa at home.

The Mt. Zion boys soccer team combined for 13 goals in back to back days to give them two wins. One a 6-0 road win against Charleston and a 7-0 win against St. Theresa.

In the Charleston game, the Braves played out the rain and won the game. Kam Clark scored twice.

In the St Theresa game, the Braves scored one goal in the first half. That goal came in the 10th minute when Luke Shumaker rebounded the ball off a miscues corner and fired it into the back of the net to give the Braves a 1-0 lead.

The Braves outshot the Bulldogs 19-1 in the first half. The shots started to open up opportunities in the second half.

Ten minutes passed without scoring. Then I’m the 12th minute, Greg Frazier fired a shot from just inside the 18 yard line to extend the Braves lead to 4-0. Frazier moments later played playmaker and found Griffith wide open for his second goal of the night to give the Braves a 5-0 lead.

Ramon Munoz and Clark added the last two goals as the Braves defeated the Bulldogs 7-0.

The Mt. Zion boys soccer team played in the Titan Invite the past weekend. In the first game against Belleville West, the Braves found themselves trailing the whole game. With less than two minutes left Clark found a way to score and gave the Braves a 1-1 draw.

The Braves wrapped up their week with a 4-0 loss against Columbia in the Titan Invite. The Braves improved to 5-8-3. This week the Braves will play Mattoon, Taylorville and Effingham. 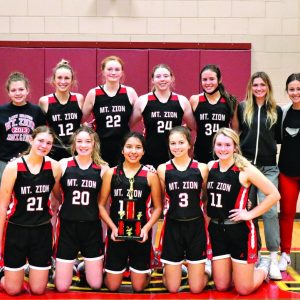