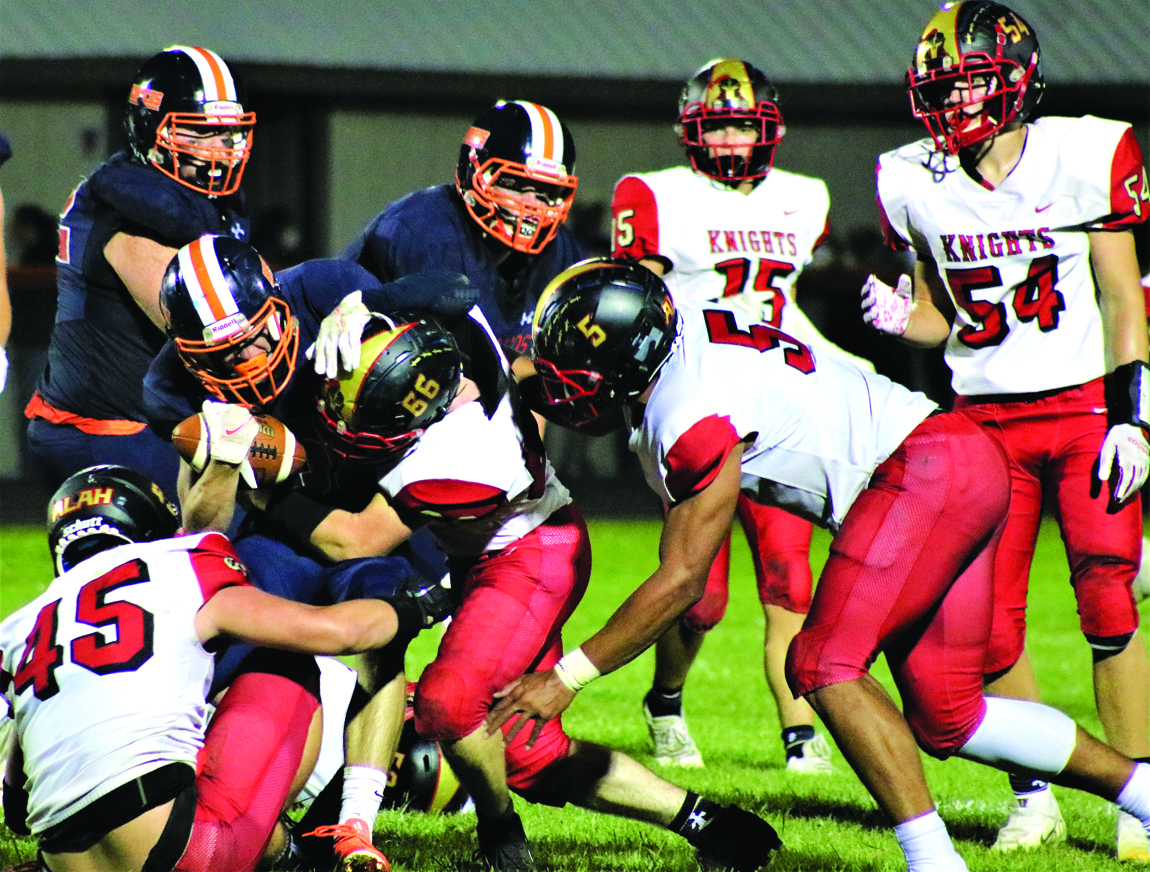 The Knights defensive players swarm to the ball carrier in the game last Friday night in Cerro Gordo. In on the tackle are #45 Austin Abercrombie, #66 Tanner Beckmier, and #5 Kaden Feagin. Looking on from behind are #15 Noah Garrett and #54 Drew Cotton. These five were all in double figures in tackles, Feagin, 19; Cotton, 14, Abercrombie, 13, Beckmier, 12 and Garrett, 10.

The Arthur Lovington Atwood Hammond Knights football team traveled to Cerro Gordo last Friday night to take on the Cerro Gordo Bement Broncos. The Knights were coming off their big win over the Tri-County Titans last week and looking to maintain their momentum for that game. CGB was looking for the same thing after a big victory over Sangamon Valley.

CGB received the opening kickoff but the Knights defense forced them to punt and a bad snap sailed over the punter’s head with ALAH recovering the ball at the Broncos 9. Kaden Feagin scored the first of his four touchdowns in the game on a 7 yard run with 8:52 remaining in the first quarter. The kick by Chilton Ingram was blocked and the Knights led 6-0.

The visitors forced another CGB punt but then couldn’t move the ball themselves and had to punt. Again the Knight’s defense held and forced another Bronco punt. At this point the clock was down to 3:14 left in the first.

On their next possession, the Knights steadily moved the ball on runs of 5 yards by Feagin, 6 by Mason Allen and 9 by Landon Waldrop. With the ball at the Bronco’s 25 yard line Feagin scored his second td from that spot. Ingram’s kick was good and the Knights led 13-0 with just 7 seconds gone in the second quarter.

With a steady diet of runs by CGB’s running back Cody Layfield, the Broncos got the ball to the 6 yard line of the Knights. Fullback Spencer Sterling would take it the final 6 yards into the end zone to put points on the home side of the score board. The kick by Ty Carlson was no good and the lead was 13-6 in favor of the visitors with 7:59 left in the half.

Neither team could get anything going and the half ended with the Knights leading 13-6.

ALAH had won the coin toss at the beginning of the game and deferred to the second half. Getting the ball first turned out to be a very good thing for the Knights. After a nice kickoff return by Waldrop, ALAH started at the Bronco 48. Feagin had a 20 yard run and a 5 yard run to take the ball to the 23. #23 Landon Waldrop got the call on the next play and took it in for the score. Ingram’s kick was good and the red, black and gold led 20-6 with 10:29 remaining in the third.

On the ensuing kickoff, Knight kicker Chilton Ingram executed a perfect pop kick that Waldrop raced down the field and recovered for the Knights at the CGB 38. On the first play from scrimmage, Feagin took the ball in and just 11 seconds after their first td of the second half, the lead was extended to 26-6 after another blocked EP.

CGB fumbled the ball on their next series but ALAH gave it right back on their next play. A big pass play from QB Colin Warren picked up 34 yards. A couple of Layfield runs and a face mask penalty by the Knights put the ball on the 3 and Layfield would score from there. The two point conversion was stopped by the Knights and with 5:12 left in the third, the score was 26-12 in favor of the visitors.

The Broncos attempted onside kick went out of bounds so ALAH started at their own 48. Feagin had a 17 yard run, Waldrop a 6, and Jayce Parsons tacked on 17 more taking the ball to the 8. Feagin scored his fourth and final td of the game from there. The kick was good and the

Knights could breathe a little easier with a 33-12 lead with 3:19 remaining in the third.

The Broncos scored on their next series on a 21 yard run by Layfield. The kick by Carlson was good and the score was 33-19.

CGB attempted another onside kick by the Knights’ Tanner Beckmier covered up the ball. The ALAH offense moved the ball to the 10 but on a fourth down play fumbled the ball and the Broncos recovered.

CGB started at their own 13 and moved the ball to their own 47. QB Warren dropped back to pass but the Knights’ Landon Waldrop jumped the route and picked it off and took it 47 yards for a pick six touchdown. Another blocked EP kick gave the Knights a 39-19 lead with 10:16 left.

CGB turned the ball over on downs and on the first offensive play ALAH quarterback Jayce Parsons took the ball 53 yards for the last Knights’ score. Ingram’s kick was good and the lead was 46-19 with just 4:50 left.

The Broncos last possession ended when defensive lineman Colin Smith recovered a fumble for the Knights. The clock ran out and the visitors went home happy with the 46-19 victory.

Arthur Lovington Atwood Hammond will travel to nearby Arcola for a match up with the Riders next Friday, October 1. Game time is 7:00 p.m.

Kick-Offs – Chilton Ingram, 8 for 367 (and one BEAUTIFUL pop kick that we were able to recover – huge turning point in game!)