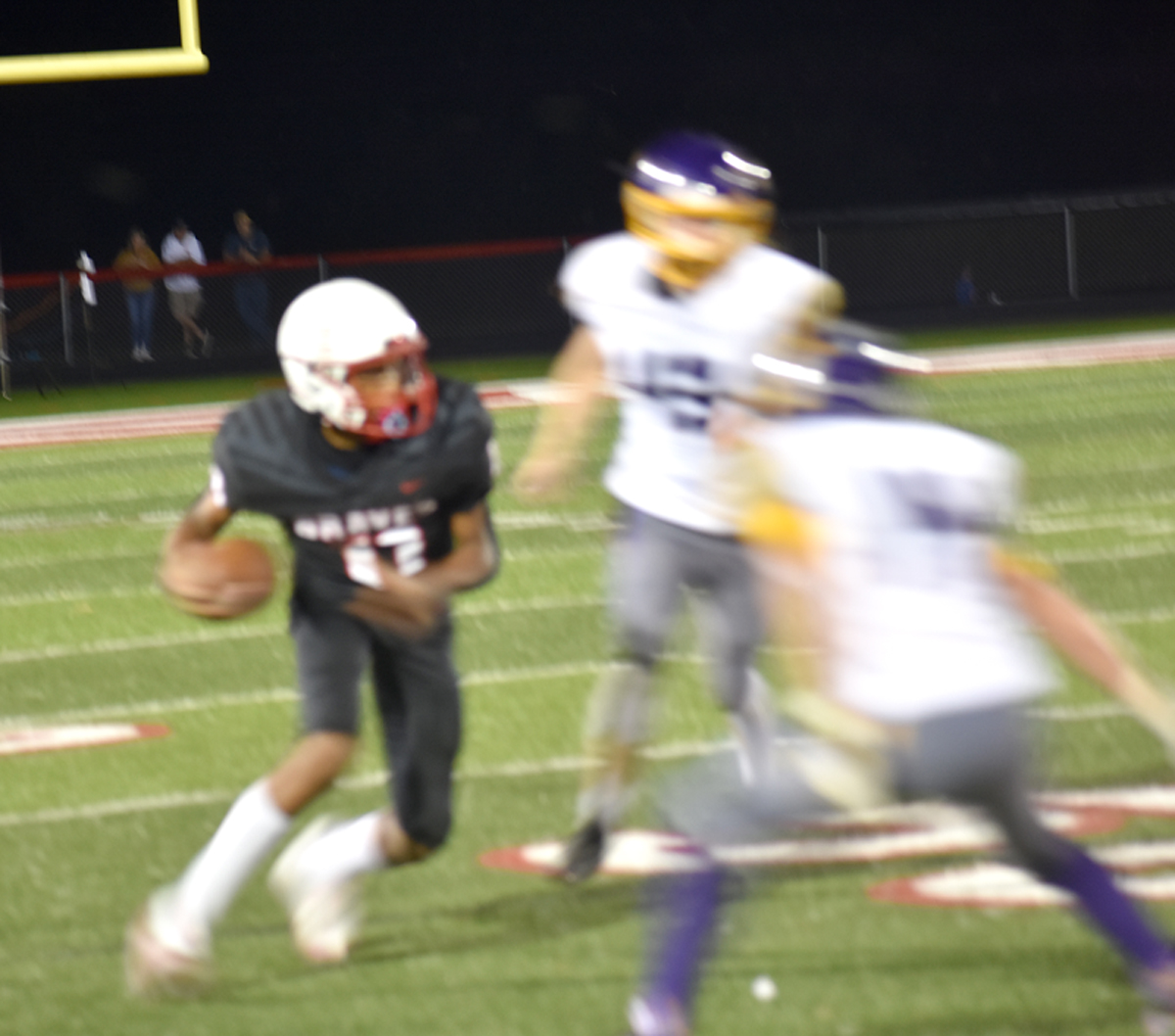 Mt. Zion wide-receiver Brayden Trimble avoids a tackle after receiving the ball in a 55-14 win against Taylorville on September 17 at the Mt. Zion Football Field.

The Mt. Zion football team won their third game of the season in a 55-14 Apollo Conference win against Taylorville. Sophomore quarterback Tyson Evans scored five touchdowns including four passing and one rushing and threw for 189 yards.

“We’re lucky we got some quarterbacks that can play and some kids who can do some things, and he’s (Evans) one of them,” Mt. Zion head coach Patrick Etherton said. “He’s a tough kid and he’s a tough competitor. He’s got some stuff to work on and he knows that. He threw an interception, but he’s a sophomore. He’s 16 years old, and he’s playing his first varsity game and I thought he did a nice job.”

The Braves offense struck the four drives of the game. The first score came within 20 seconds of the opening of the game. Senior wide-receiver Christian Keyhea received a direct snap as he ran in for a 63-yard rushing touchdown. Brandon Traxler nailed the extra point to give the Braves a 7-0 lead.

On the next drive, the Braves relied on their ground game behind the rushing ability of Keyhea and senior running back Matthias Adams. Both moved the chains and it paid off when Adams rushed and trucked his way into the endzone for a six-yard rushing touchdown. Traxler’s extra point was good to give the Braves a 14-0 lead.

On the third drive, seconds before the quarter ended the Braves struck again. Evans connected a pass to an open Brayden Trimble that would go down as a 21-yard passing touchdown. The extra point was good to give the Braves 21-0 lead.

“Brayden as a freshman just does something, he’s really talented, smooth, gets it, catches the ball well,” Coach Etherton said. “He’s a kid that we think we need to get out there and let him run around. And he’s done some nice things. And he’s only gonna get better because he’s only a freshman. This is his fourth varsity game ever and he didn’t play jfl last year, because they didn’t have a season. So he’s going to be pretty good.”

The Braves defense forced an interception when Chiron Petty read the defense and intercepted the ball and ran for roughly 60-yards. Keyhea then struck again on a direct snap during the fourth drive. Keyhea received the snap and rushed in for a 20-yard rushing touchdown.

Keyhea finished the game with 169 rushing yards, but did more later in the half.

The Taylorville Tornadoes then scored on their next drive. Tornadoes’ quarterback Kamren Heimsness threw a 31-yard pass to Joe Lyons. The Tornadoes then intercepted Evans to get the ball back within the 40-yard line.

“I thought our kids played some inspired and energetic football,” Coach Etherton said. “I thought we played 45 minutes of pretty good football. We played three minutes of not very good football there. But our kids came out with some passion and desire and wanted to right some wrongs from last week.”

Heimsness then connected once again with Lyons. Heimsness threw a 26-yard pass to Lyons in the endzone to narrow the lead to 28-14.

The Braves found a way to strike back to end the quarter. Evans fired a 10-yard pass to a wide-open Trimble to give each other their second touchdown of the night and the Braves a 35-14 lead to end the first half. Trimble finished the game with 63 receiving yards and two touchdowns.

The Braves picked up right where they left off in the second half. Evans fired a pass to Keyhea that Keyhea was able to run for a 54-yard receiving touchdown. Traxler’s extra point was good to give the Braves a 42-14 lead.

Evans found Keyhea once again in the second half. This time Evans threaded the needle to Keyhea for a 33-yard passing touchdown. The extra point attempt was no good and that gave the Braves a 48-14 lead. Keyhea finished the game with four touchdowns and added 126 receiving yards.

Evans rushed in the final touchdown of the night for a one-yard rushing touchdown to give the Braves a 55-14 win.

The Tornadoes drop to 2-2 overall. Their next game will be at home against Effingham on Friday at 7 p.m.

The Braves improve to 3-1 overall. Their next game will be on the rod against Lincoln on Friday at 7 p.m.

“For us, we really got to work on figuring out how to play 48 minutes of football and play a complete game, if we want to get to where we want to go and so we’re gonna work on that,” Coach Etherton said. You’re never as good as you think or as bad it seems. So we’re going to go back and evaluate and move on to Lincoln and go from there.”