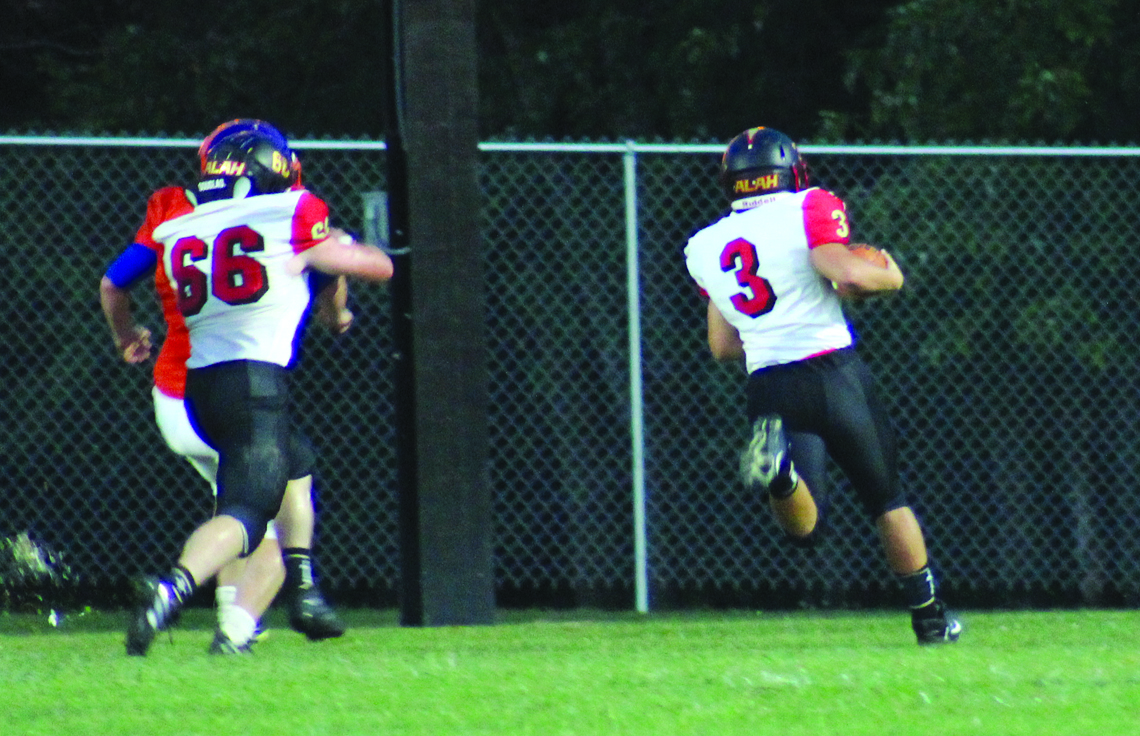 #3 Maddix Stirrett races to the end zone for the first touchdown in the game against Tri-County last Friday night in Oakland. Maddix had intercepted the Titan QB’s first pass and returned it for a pick 6 and put the Knights on the scoreboard first.

The Arthur Lovington Atwood Hammond Knights football team traveled to Oakland last Friday night to take on the Tri-County Titans. The Knights were looking for their first win of the season and they got it in a big way, scoring in a variety of ways-two pick sixes on interceptions, three run play touchdowns and a punt return.

The game started with the Knights winning the coin toss and electing to receive. However the Titans executed an onside kick to perfection and had the ball first on the recovery. They were unable to move the ball and turned it over on downs at the 10:26 mark of the first quarter.

The Knights’ first series started off well with a couple of first downs gained but unfortunately turned the ball back over to TC on a fumble. That miscue was negated when Maddix Stirrett picked off Titan QB Jack Armstrong’s pass on their first play and returned it 11 yards for a touchdown. With Chilton Ingram’s extra point kick the Knights were on the board with a 7-0 lead with 7:21 left in the first.

The Titans were forced to punt on their next possession and then forced the visitors into a punt situation as well. But the punt snap sailed over punter Landon Waldrop’s head and the Titans had great field position at the Knights’ 20 yard line. The ALAH defense took charge and held the home team forcing them to turn the ball over on downs. The Knights got the ball back at their own 15 to start their next series. Four plays later, running back Kaden Feagin took the ball 70 yards to the opposite end zone for another score. The EP try failed and the Knights led 13-0 with 11:14 remaining in the half.

After the strong defense forced the Titans to turn the ball over on downs yet again, it took only three plays this time for Landon Waldrop to break away and score from 38 yards out. Ingram’s kick was good and at the 7:37 mark of the second ALAH let 20-0.

Tri-County went on a long drive on their next series which started on their own 17 after a nice kickoff by Ingram, who had 7 kickoffs for 339 yards in the game. The home team took the ball all the way to the Knights’ 30 but turned it over on a huge stop on a fourth down and two play by the red, black and gold defense.

Mason Allen gained 20 yards on a first and 15 play after an illegal procedure penalty against the Knights and then on the next play, Feagin scored on a 56 yard run. Ingram’s kick was straight through the uprights and ALAH was up 27-0 with 49 seconds left in the first half.

In the second half, ALAH picked up where they left off, scoring on a 44 yard punt return by Feagin after forcing TC to punt on their first possession. Once again, Ingram’s kick was good and the Knights led 34-0 at the 10:13 mark of the third.

The ALAH defense would put the last points on the board for the visitors when defensive back Feagin picked off a Titan pass and took it 59 yards for the td. It was Feagin’s fourth touchdown in the game, having scored on two offensive runs, another on special teams and his last on defense. Ingram’s kick gave the Knights 41 points and the clock would run for the remainder of the game.

The Titans would add two passing touchdowns, one in the third and one in the fourth quarter making the final score 41-14 in favor of Arthur Lovington Atwood Hammond.

Coach Jefferson stated after the game, “We definitely needed this win. We’ve talked a lot about how we can right the ship and it had to start against Tri-County. I think fans saw a lot more intensity from our team on Friday, especially on Defense. We knew they had a big running back (#40, John Kibler) and we would have to tackle him, and we took care of business there. We scored on offense, defense, and special teams, so it was nice to see more of a complete game than we have had this year, but we still have a lot to fix and we need to get better every week.”

Looking ahead to this week’s game against the Cerro Gordo Bement Broncos Jefferson said, “They are a competitive team with a lot of seniors who have been playing varsity for a few years now. At the moment, they have one more win than us – they did have a week off because of a forfeit win against Carlyle, which could be an advantage or disadvantage depending on how you look at it.”

He continued “If we can play as well on defense as we did this past game, I think it will really continue to spark our team and take us over the edge. I think offensively, we can do things to give teams fits and make enough plays to score, but we have to stop teams from scoring. I’m excited to see if our guys can carry the momentum from Week 4 to Week 5.”

ALAH travels to Cerro Gordo next Friday, September 24 to take on the Cerro Gordo Bement Broncos. Game time is 7:00 p.m.