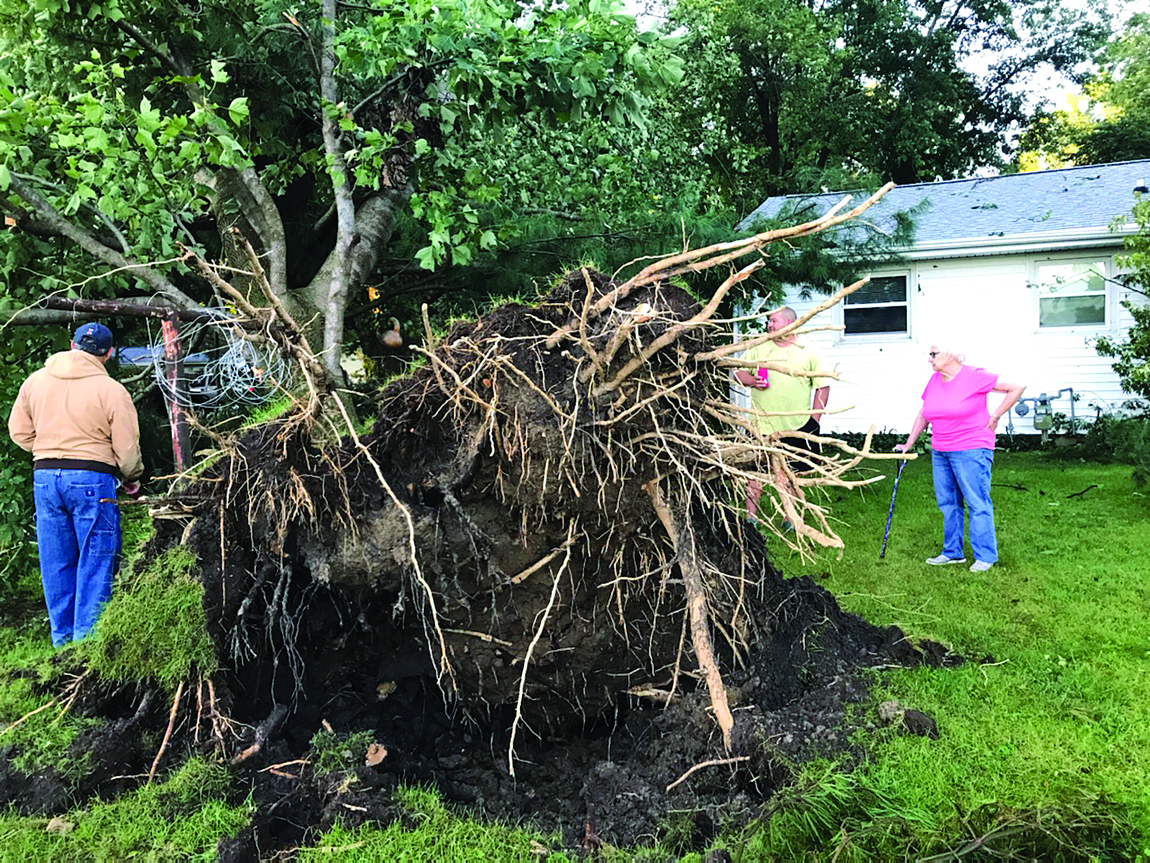 Laverne Smith and neighbors survey the damage at her home from the storm. One of her favorite trees was uprooted.

A possible tornado hit part of the west side of Atwood on Tuesday evening, Sept. 7 between 8-8:30. The word “tornado” hasn’t been confirmed that I have heard, but Kathy & Gary Davis east of town said they saw what looked like a funnel cloud right over Atwood at the time it hit. Several people in that area said they heard what they described as a train. If it wasn’t a tornado, it was definitely a very strong wind. There were areas on the west side that “looked like a war zone,” one resident remarked.

Several residents with the help of village employees and fire department were able to clear a path on West Orchard so any emergency vehicles or residents could get through. Early Wednesday morning, I was out taking pictures and could hardly believe the difference between this area and the rest of the town. Most of it seemed to occur on either side of the park from Missouri Street west.

When driving around the area, Laverne Smith lost so many trees, it was hard to tell with so many large limbs down. A big tree in her back yard was completely uprooted.

A home a few houses east of Laverne lost the edge of his roof and gutter. There were trampolines tossed around like frisbees. One home had a trampoline they had no idea where it came from.

The backstop at the NW diamond at Atwood Park was damaged. The top of it was literally bent like a V. A set of bleachers was blown into the middle of the park road.

Most of the homes in the West Orchard area had some sort of damage, some more than others, and lost power for a time. This area includes Royal Court, Ohio Street, Kansas St., Juniper Drive, Atwood/Richey Park and even some damage on Missouri St. Roger Marshall on Missouri had a tree on his house.

A white SUV, sorry I don’t know the make of the car or owner’s name, got a direct hit from a tree. It looked like it received a lot of damage. There was a truck sitting there as well, but it was hard to see if it had any damage.

Emily and Joe Schweighart who live in Royal Court had their neighbor’s trampoline “bounce” in their yard causing damage to the back of their house. Also, a piece of the trampoline ended up in front causing approximately $3,000 in damage to the hood and windshield of his truck.

I know there is damage that I have not heard about, but to say it was a mess is an understatement. Ellen Lynch, Public Relations Director at the Atwood Fire Department/EMS, stated they had no reports of any injuries from the storm.

If you drove in the area today, and didn’t know where the trees and other objects had been, you wouldn’t know anything in particular happened. I am sure Mrs. Smith and some of the neighbors miss the shade they used to have.

All in all, the area was fortunate that no homes were blown away and no one injured. However, that doesn’t mean it wasn’t scary. Thanks to everyone who helped in any way to clean up the west part of town, they seemed to get a direct hit. The rest of town seemed to be okay. It was evident that neighbors were helping neighbors.