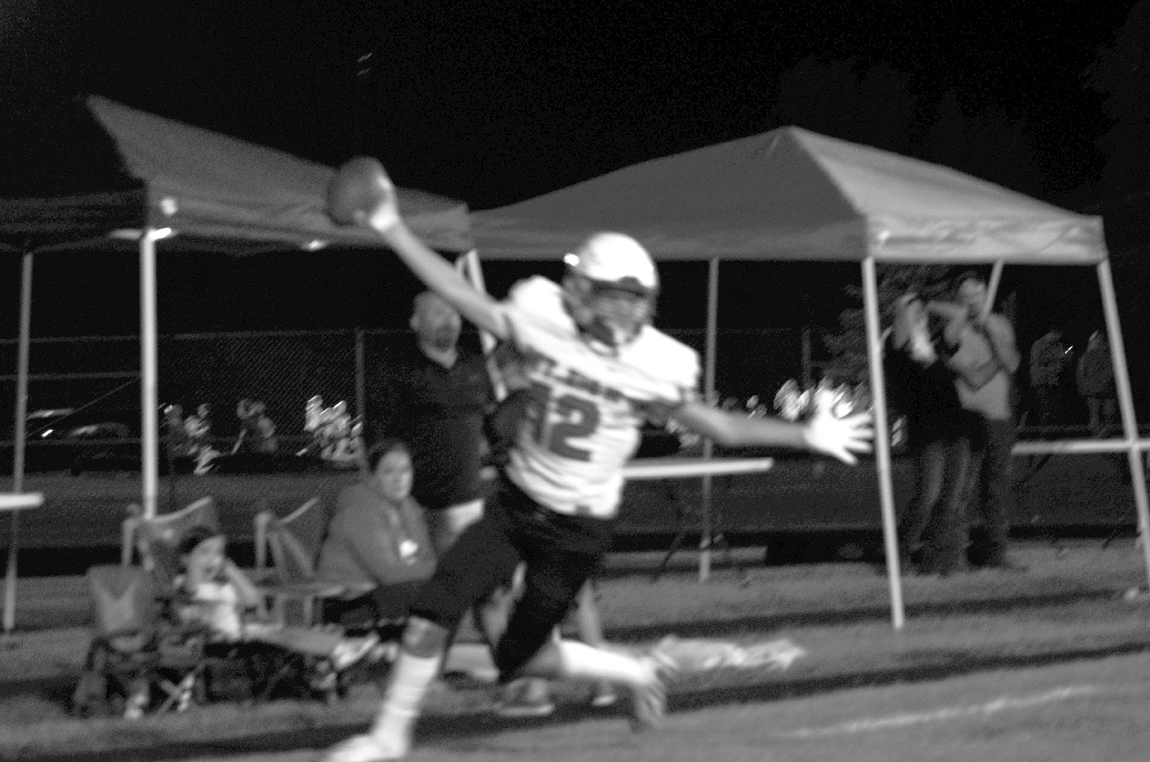 Grant McAtee celebrates his touchdown reception in a 35-27 loss against Mahomet-Seymour on Friday night.

The Mt. Zion football team fought till the very end, but lost their first game of the season against Mahomet-Seymour 35-27 in Apollo Conference play. Sophomore McCovey Adams threw three passing touchdowns and scored a rushing touchdown.

“He’s a great kid and understands it,” Mt. Zion football head coach Patrick Etherton said. He understands what we’re trying to do. He’s still got a long way to go. But, he’s getting it.

Mahomet-Seymour scored two unanswered touchdowns to put the Bulldogs up 35-21. Bulldogs’ junior quarterback Wyatt Bohm found senior Nolan Nierenhausen on a 30-yard pass Mitchell Gallier then punched in a one-yard rushing touchdown to give the Bulldogs a 28-21 lead.

On the Bulldogs’ next drive, junior Quenton Rogers found his gap and rushed the ball in for an 18-yard rushing touchdown that gave the Bulldogs a 35-21 lead.

The Mt. Zion rally started shortly after behind their defense. The Braves’ defense forced a fumble to set them up on the 40-yard line.

Adams and his offense worked their way down the field by Adam then rushed the ball in for a three-yard rushing touchdown that narrowed the lead to 35-27.

The Bulldogs then muffed the next kickoff that was returned at the 23-yard line. The Bulldogs defense broke up a pass from Adams to end that drive.

The Bulldogs’ were forced to punt with less than five minutes left in the game. The Braves ran a play for Christian Keyhea that was a direct snap for what would’ve been a 51-yard TD that could’ve been game-changing. The play was called back due to a holding call.

“I thought our kids played well and I thought we made some plays,” Coach Etherton said. “I think unfortunately we had some negative plays too and we put ourselves in some bad situations but our kids kept fighting. We had an opportunity in the fourth quarter where we had a touchdown that would have tied it up get called back. Overall I think we’re better than we were last week. I thought we did some good things and certainly we’re going to watch film and get better.”

Earlier in the game, the Braves and Bulldogs went back and forth scoring.

The Braves followed suit in scoring. McCovey Adams threw a pass to Christian Keyhea for a 49-yard passing touchdown and the extra point by Brandon Traxler was good to even the score at 7-7.

The Bulldogs failed to score on their next possession and the Braves capitalized. The Braves marched up the field and then got into the red zone. Adams then found Grant McAtee wide-open in the endzone for a 13-yard passing touchdown on fourth down. The extra-point was no good, but the Braves took the lead 13-7 to start the second quarter.

The Bulldogs then rattled off two unanswered touchdowns behind their running back Luke Johnson. Johnson rushed in for a three-yard touchdown on one drive and then with four seconds left he ran into the endzone to extend the Bulldogs lead 21-14. Johnson finished with 112 rushing yards.

The Braves defense stepped up early in the second half. The Braves held their ground and forced the Bulldogs to punt and the Braves capitalized.

Adams and the offense came out composed. Adams threw a pass to Mason McNeill for a three-yard passing touchdown. Adams then converted a two-point conversion passing to Chiron Petty to tie the game at 21-21.

The Bulldogs improve to 3-0. Their next game will be a home-game against Lincoln on Friday at 7 p.m.

The Braves fall to 2-1 and will play host to Taylorville this Friday night. Kickoff will be at 7 p.m.

“We’re always gonna worry about ourselves and try to get better,” Coach Etherton said. I think when we watch film we’ll see the good things, but I think we still got a long way to go. Our goals are still intact, we want to do what we want to achieve. We’re gonna concentrate on getting better and correcting mistakes and our kids get an opportunity to go home and play a home game. We haven’t been home for two weeks and we play Taylorville and we didn’t play them in the spring and our kids were sad about that. But we’re gonna do what we do. We’re gonna evaluate, we’re gonna move forward and we’re gonna continue to go in the direction we’re going.”