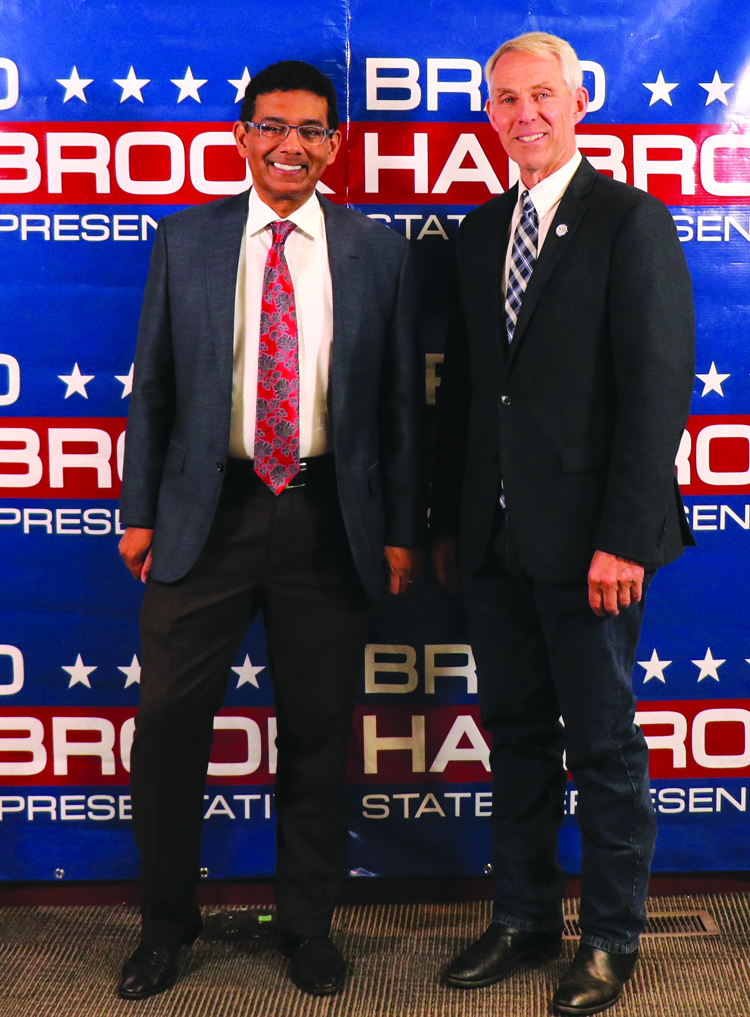 DINESH D’SOUZA SPEAKS IN ARTHUR. Best-selling author and influential thinker Dinesh D’Souza was the guest speaker at State Representative Brad Halbrook’s fundraiser held on Saturday, September 11 at Penn Station. The evening began with a VIP meet and greet at 5:00 p.m. followed by a catered meal from Pauly’s BBQ. Close to 325 were in attendance (pictured below) to hear one of America’s most influential conservative thinkers and get his take on today’s turbulent political climate and other current events. Several other local Illinois elected officials were on hand and spoke as well sharing their thoughts in regards to our state politics.

By MARTY YEAKEL
For The Graphic Clarion

Penn Station in Arthur was the setting Saturday evening, September 11, for the opportunity to hear a commentator on the national scene, Dinesh D’Souza.

Hosted and planned by Brad Halbrook and staff, the venue was packed with those eager to hear what the speakers had to say.

Halbrook is our Representative in the Illinois House for the 102nd District. The evening began with dinner served and provided by Pauly’s BBQ of Arthur.

Before D’Souza took the stage, several local elected officials shared some of their thoughts, ideas and hopes for our area counties and the state.

Brad Halbrook began by thanking local people and businesses for their support and making the evening possible. He praised this community for standing up for what we believe in and not backing down.

While there were many present who live in Arthur and nearby, he also noted that many had driven several hours to get to the event. He mentioned Republicans from east and south central Illinois who serve in the state House and often work together for those they represent, among them Dan Caulkins of the 101st District from Decatur and Adam Niemerg of the 109th District. Both men were present and had a few words to say along with Halbrook about the difficulty of working in a body where they are largely outnumbered by those whose beliefs are not the same as theirs as to what is best for our state.

These speakers were followed by Congresswoman Mary Miller from Oakland who represents our district in the United States House. She discussed working with the Freedom Caucus which is committed to following the Constitution and noted that our founding fathers intended for ‘regular’ folks to take part in the government.

Miller stressed the importance of the rights detailed in the First Amendment.

The congresswoman was followed by her husband, Chris Miller, who represents the 110th District in the Illinois House of Representatives. He reminded the audience that the fight for freedom never ends and that we “are not descendents of fearful men.”

After this, Rep. Halbrook introduced a few other people in the crowd including Jeannie Ives and her husband Paul.

Ives is a former state representative and ran for the Republican nomination for governor in 2018 but lost that nomination to the incumbent, Bruce Rauner. She is currently running for the United States House of Representatives from the 6th District of Illinois.

Dinesh D’Souza, conservative commentator, author of 20 books and producer of 5 movies/documentaries who also has a daily podcast, then took the stage and spoke for nearly an hour and a half on our country’s place in the world and the situation we find ourselves in, the state of our union and what we can do to improve on the American dream. He noted that we often talk about an American dream and that this is the only country in the world that actually believes in a dream for their country.

D’Souza, a native of India, came to the United States in 1978 as a 17-year-old foreign exchange student with the Rotary Exchange program. He quickly realized he could do things in this country that would not be possible anyplace else in the world. He noted that in other parts of the world your destiny is handed to you but in America you can become, “the architect of your own destiny.” Dinesh went on to graduate from Dartmouth University and became a naturalized citizen in 1991.

Touching on the date of September 11, D’Souza stated that it is a time to celebrate heroism even as we feel great sadness at the brazen attack on our country and its citizens. He feels we need to be reminded that now is a time for a reassessment and the recognition of both the enemy abroad and the enemy within.

An admirer of President Ronald Reagan and a policy adviser in that administration, D’Souza listed the five forms of identity that Reagan’s America was all about: the individual, family, local community, faith and our country. Values we must never lose or forget. We must recognize what makes a difference and become more outspoken in our beliefs. As he said, “learn to enjoy the fight!”

D’Souza exited the stage to a standing ovation. The evening concluded with a raffle for five of his books and an auction of two posters.

Having someone of national renown come to Arthur is quite an accomplishment and all those involved deserve a big note of thanks for making this event happen.