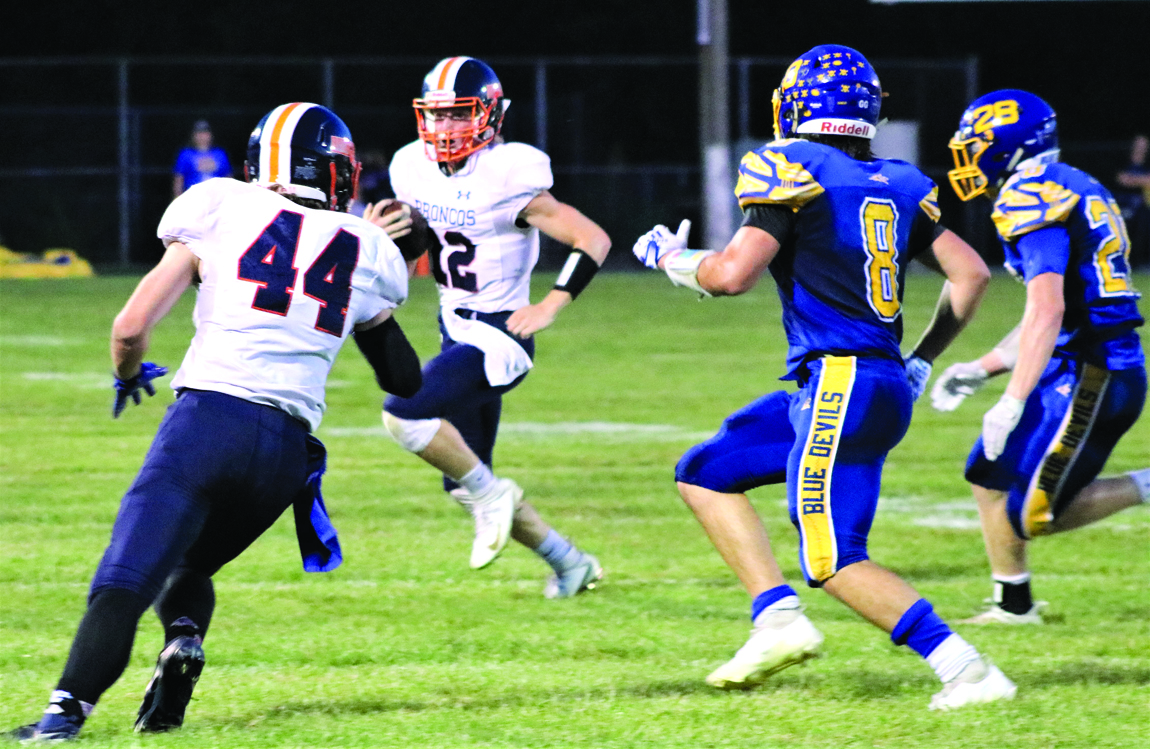 Rolling out of the pocket on the quarterback keeper is senior Colin Warren (#12) as teammate Spencer Sterling (#44) tires to block Blue Devils defensive players Parker Stevens (#8) and Luke Zimmerman.

The Cerro Gordo Bement Broncos kicked off their Lincoln Prairie Conference football season with a hard fought 35-42 loss to Villa Grove on the road Friday, September 10.

The Blue Devils got things started in the first quarter, when an offsides penalty against the Broncos gave them new life on their initial drive of the contest.   Devils quarterback Barr found Clodfelder from 20 yards out for the touchdown.  The extra point attempt was good, and with 7:12 left in the opening period, the score stood at 0-7.

After Villa Grove broke up a fourth down pass attempt by the Broncos, the Blue Devils took possession at their own 39 and struck quickly as Barr found Kiesel for 47 yards to the CGB 14.  A false start penalty and a two-yard loss on a running play made it second and 17 from the Bronco 21, and Barr again targeted Kiesel who hauled it in for the score.  The extra point kick again was good, and VG’s lead was extended to 14-0 with 11:12 left in the half.

The Broncos would not lay down, however, and Cody Layfield (19 carries for 208 yards, two TD’s) scored on a 65-yard gallop up the middle on the Broncos second play of the possession.  After their extra point attempt snuck over the crossbar, the score stood at CGB7-VG14.

This time disaster struck for the Blue Devils as Barr’s pass overshot his intended receiver and ended up in the hands of a Bronco defender at their 11-yard line.  Layfield then went 89-yards on the first play of the drive to make it 13-14 , and it remained a one-point Broncos deficit after they blocked the extra point attempt.

A 26-yard kickoff return by Cline set Villa Grove up at their own 48 to start the drive, and a series of hard-fought runs moved the ball into Bronco territory at the 40. Zimmerman for 38 yards to the Bronco two, and from there, Barr ran it in for the score.  The extra point attempt was good, and with 5:44 left in the half the scoreboard read CGB 13-VG 21.

After the Blue Devil defense forced a Bronco punt, the Blue Devils took possession at their own 24.  Barr scrambled for 16 yards and a pair of Barr completions to Dowler helped move the ball to the CGB 36, where, facing fourth down, Barr was able to avoid defensive pressure and connected with Kiesel making a diving catch for the touchdown.  Again, the extra point kick was good, and the score stood at 13-28, where it remained at the half.

A squibbed kick by Price to open the third quarter giving CGB good field position at the 46, and it took just two plays for the Broncos to reach the end zone after a 44-yard option keeper by QB Colin Warren moved the ball to the VG two.  Warren then scored on a sneak on the ensuing play, and after Layfield bulled in with the two-point conversion, the score stood at CGB21-VG28.

The invigorated Broncos then picked off another Barr pass, and on third and 19, Warren was able to find a streaking Layfield for 33 yards to the Blue Devil four-yard line where he was forced out of bounds.  After a Layfield run moved the ball to the one, Warren again called his own number, sneaking it in for the score with eight minutes left in the quarter.  The CGB extra point attempt was no good, and the score stood at CGB27-VG28, with all momentum seemingly on the Bronco’s side.

The Broncos then used a mix of runs and passes to move the ball to the Villa Grove 19-yard line, where, facing fourth and seven, they went for the end zone, only to have Clodfelder break it up as the Blue Devils regained possession.

From there, the Blue Devils mounted a 12 play, 81-yard drive that consumed five minutes and 42 seconds of clock, culminating in a six-yard dive by Zimmerman with 6:50 remaining in the contest.  This time, the Blue Devils holder Layne Rund was able to spin to his right and find a wide-open Parker Stevens for the two-point conversion, making the score 27-36 in favor of Villa Grove.

Once again, the Broncos refused to quit, taking just two plays to score, this time on a 58-yard bomb from Warren to Chance Young.  A two-point conversion run by Layfield made it CGB35 -VG36 with 5:54 remaining.

Cline’s 33-yard kickoff return set the Blue Devils up at the Broncos 40, but Barr, being pressured, was once again intercepted, giving the Broncos possession with a chance to take the lead.  This time, however, the Devils Defense stuffed three straight Bronco runs, forcing a punt which rolled dead at the VG 21.  A direct snap to Zimmerman gained four yards, and on the next play, another direct snap, Zimmerman outran the CGB defense for a 75-yard TD down the Bronco sideline.  This time the extra point attempt was no good and the Broncos trailed 35-42 with 2:20 left in the game.

Three quick completions led the Broncos into Blue Devil territory, but a huge sack by two Blue Devil defenders resulted in a nine-yard loss, forcing CGB into a third and 19 situation from the VG 44.  A third down pass fell incomplete, forcing a fourth down pass completion, but the Blue Devils defense stopped the Bronco receiver short of the first down marker at the 40, and from there the Villa Grove took over on downs and ran out the clock.

The Broncos will face the Storm as they travel to Sangamon Valley Friday night at 7 p.m.