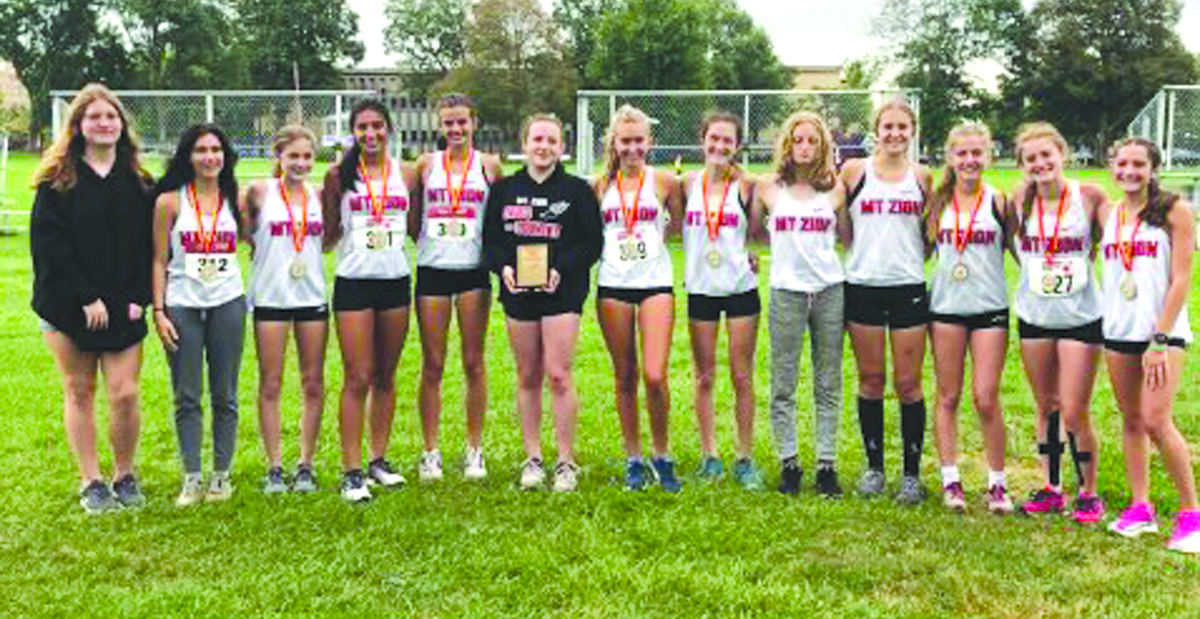 The Mt. Zion girls cross country team poses for a photo with the second place trophy at the Charleston Invite on Saturday morning.

The Mt. Zion cross country team competed in the Charleston Invite last weekend and had 8 top-25 finishes between the boys and girls team. The girls’ team consisted of three top-10 finishes.

Hailey Betzer raced for an individual girls’ high of 19 minutes and 54 seconds. Her time placed her in fourth-place.

A huge congratulations to Hailey for joining the 19 minute club,” Mt. Zion head cross country coach Kelly Fox said. “We had some strong packs running together. Haley/Ashleigh were the leading duo through the two-mile in 13:00. We haven’t had this lead pack in a long time and it was great to see them go out with the confidence to lead the race. Both fell back a bit in the 3rd mile but we’re going to have to keep taking these “risks”. Runners know what I mean, that fear that you won’t have anything left in the end or what we call “hitting the wall”. This risk is what we need to do more so that we keep pushing our limits to know what we’re capable of.”

Her teammates Ashleigh Anderson and Sofia Munoz finished a few places behind her. Anderson crossed the line at 20 minutes and eight seconds while her teammate Munoz crossed 25 tenths of a second.

“Sofia bounced back after a disappointing finish at Normal,” Coach Fox said. “It’s not that I was disappointed in her but I was disappointed for her. I see all the hard work that she puts in during practices and it was nice to see that hard work pay off. This was Sofia’s fastest 3 mile time since State 2019.”

Mt. Zion finished in second place as a team on the girls’ side with a team score of 43. Mahomet-Seymour won the meet by a score of 38.

“Our team ran very well on Saturday,” Coch Fox said. Mahomet is a good team that we’ll battle against all season. They have all, but one (Shaelin Ruzich- their #4) of their returning athletes from last year’s team that took 2nd in the Sectional and 14th at the Shazam State Meet.

They’ve also added a strong freshman (Chloe Bundren) who ran as their #2 on Saturday along with another Jansen (sister) that ran as their #3. We were still within 5 points.

Mt. Zion finished in sixth place as a team on the boys’ side with a score of 186.

The Mt. Zion cross country team will travel to Peoria to compete in the Peoria High School Invite on September 11.

“I’m happy with our performance on Saturday but not content,” Coach Fox said. “We still have a lot of work to do to meet our goals for the season. We found out that Mahomet is beatable but still a very good team. If we want to think about knocking off Mahomet at Conference, about a Regional Championship, and an opportunity to compete at the State meet, we know we’ll have to work smart, lift our teammates up, and come to practice with good attitudes and ready to run every day.”