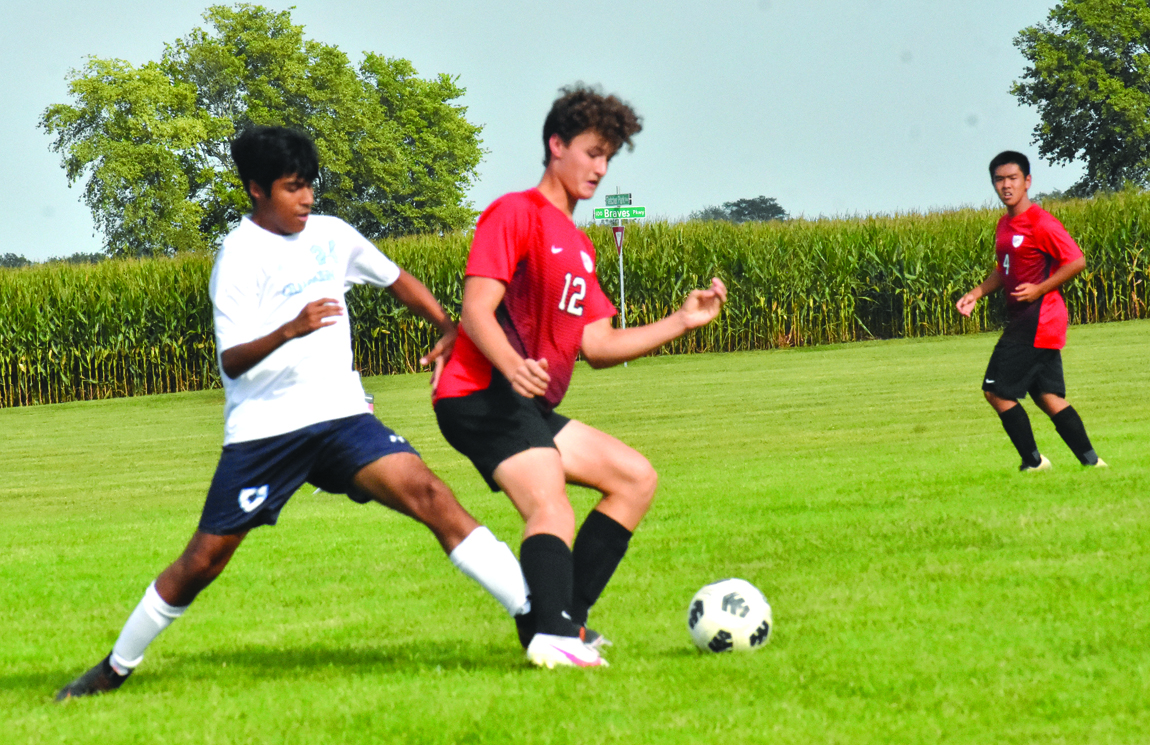 Braves’ midfielder Evan Griffith shields the ball against an attacker while Thomas Kanemaru provides a drop option in a 3-2 loss against Champaign Centennial.

The Mt. Zion boys soccer team went 0-2 last week. The team suffered a 4-0 loss against Mahomet-Seymour and then suffered a close 3-2 lead at home against Champaign Centennial.

Centennial’s offense struck first against Mt. Zion. In the 10th minute, Chargers’ sophomore Andrew Salgado maneuvered his way around the defense and nailed the ball into the back of the net.

The Braves countered on the offensive side of the field and later in the half found their way to score. That way came from Junior Kam Clark. In the 19th minute, Clark shot the ball off a defender’s foot and Chargers’ goalkeeper Keny Mayele was out in front of the goal. Clark collected himself and tapped the ball right into the back of the net to even the score 1-1.

The Braves harassed the Chargers’ defense to begin the second half. The harassment paid off in the 46th minute, when Clark received the ball off a last name turnover and shot the ball into the back of the net to even the score 2-2.

The Braves’ defense then faced pressure while also putting the pressure on the Chargers to get the winning goal. The Chargers received a free-kick right outside the box and capitalized. In the 56th minute, Chargers’ senior Ethan Anderson cross-passed the ball to give the Chargers their third and final goal.

The Braves attempted to rally in the final minutes, but the Chargers’ defense absorbed every shot. Braves’ defender Thomas Kanemaru fired a ball into the goalie box with less than 30 seconds left that could’ve been the game-tying goal. Instead Chargers’ goalkeeper Mayele caressed the ball and ended the game.

“I think we stepped up and we played hard. It was a good team effort tonight,” Mt. Zion head coach Scott Crawford said. “I thought the boys worked hard and we’re getting there. We’re getting closer, which makes me happy.”

Mahomet-Seymour outshot Mt. Zion earlier in the week 23-6. The Braves’ defense held their own against the Bulldogs’ offense. The Bulldogs’ pressure opened up, scoring in the 11th minute. Samuel Hendricks found Anthony Ramirez for a goal to give the Bulldogs a 1-0 lead.

Later in the half, Isaac Warren nailed a shot into the back of the net to give the Bulldogs a 2-0 lead. The Bulldogs had other scoring opportunities but Garrett made six saves in the first half to prevent them from scoring. One of those saves came from Garrettt diving and getting one-hand on the ball.

In the second half, Coach Crawford switched to sophomore goalkeeper Carter Bahls. Bahls made a crucial save to prevent the Bulldogs from scoring. Bahls finished with six saves.

The Bulldogs then went back to Ramirez. In the last 10 minutes of the game Ramirez scored twice to give him a hat-trick to give the Bulldogs a 4-0 win.

“I think we possessed the ball a little bit around the back which made me happy,” Coach Crawford said. “I think we broke down a little bit through the midfield trying to possess in the midfield so we’ve got some stuff to work on. Defensively I think we need to shrink the field and make it a little smaller. “

The Braves fall to 1-1-4. The Braves’ started a three-game stretch in three days yesterday against Taylorville and will face Macarthur tonight. The Braves face the Generals at the Piget Field at 4:30 p.m.

In practice, Coach Crawford said that the team will contribute to work on defensive shape and going forward out of the midfield area.