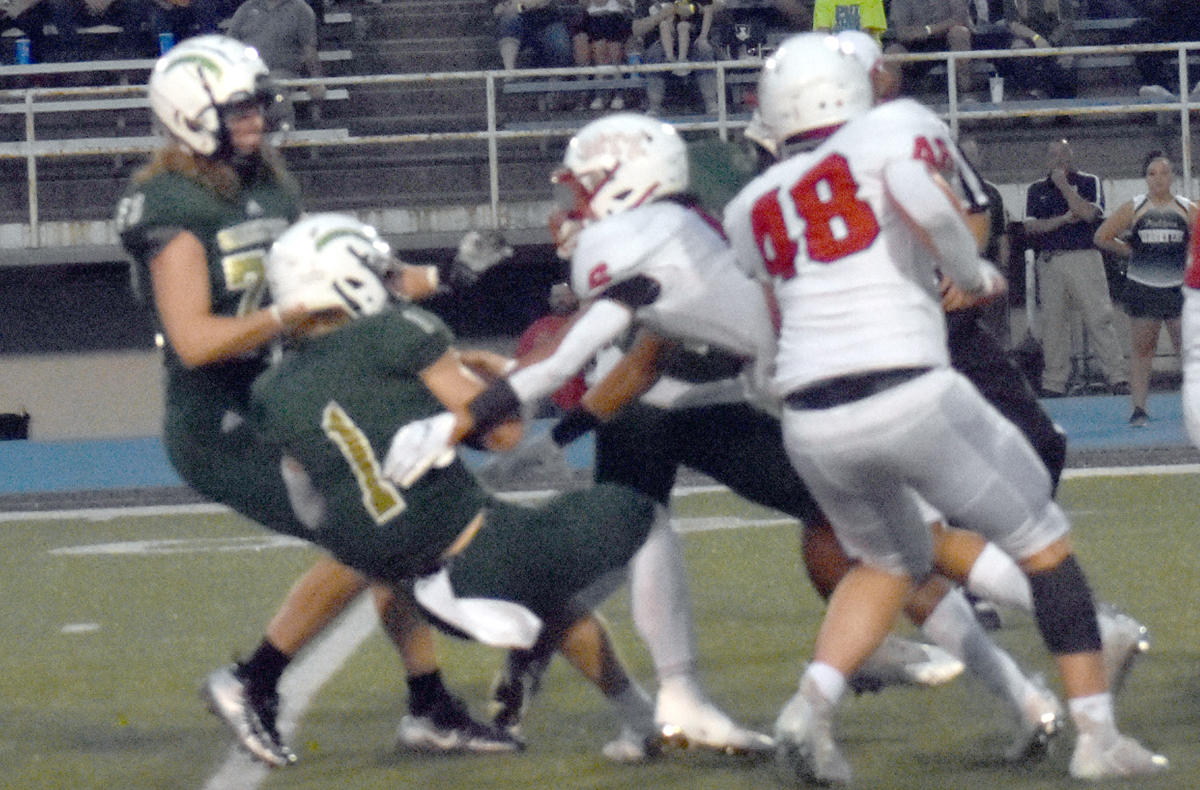 “Our goal was to be 2-0,” Mt. Zion football head coach Patrick Etherton said. “I was happy with it and I think we still got to get better and we have a long way to go. But Matton’s kids are well coached, they do a nice job. They have some good football players. So for us to come in a different environment playing in a big stadium and come away with the win is all we wanted.”

The Braves utilized offensive weapons early. Keyhea took snaps and ran the ball in a Wildcat offense. The first play of the game Keyhea ran for a 10-yard gain.

The offense opened up scoring opportunities. Early in the first quarter Keyhea scored on a 10-yard rushing touchdown and Brandon Traxler made the extra-point attempt to give the Braves a 7-0 lead.

Keyhea’s abilities drew the Green Wave defense’s attention early. This allowed the Braves to utilize their other offensive weapons in their running backs Matthias Adams
and Zac Girard as well as other receivers. Later in the first quarter, sophomore quarterback McCovey Adams completed a pass to Chiren Petty for a 65-yard passing touchdown to give the Braves a 13-0 lead.

“I think we got some other weapons on offense that we can use,” Coach Etherton said. “It’s just us continuing to get creative and as McCovey continues to mature and grow and get more game experience, he’ll feel more comfortable we can expand what we do offensively.”

The Braves’ failed to score on their opening drive of the second half. The Braves’ defense forced Spurgeon to throw an interception to put them inside the 20-yard line one play after the drive had ended.

Later in the second half, the Braves’ offense struck again. Girard rushes in a two-yard touchdown to give the Braves a 25-7 lead. Girard led the Braves in rushing yards with 69.

In the fourth quarter, the Braves forced a turnover on downs when sacked Spurgeon within the 30-yard line of the endzone. Spurgeon finished the game 12/20 with 123 passing yards, six rushing yards and a rushing touchdown.

The Braves’ rushed the ball behind Matthias Adams and Girard. Then McCovey Adams found Grant McAtee for an 18-yard pass to put the Braves in 1st and Goal territory. The Braves then direct snapped the ball to Keyhea who ran the ball in for a five-yard rushing touchdown. Keyhea finished the game with three touchdowns, two rushing and one receiving, 61 rushing yards and nine receiving yards.

The Green Wave fell to 0-2. Their next game is at home against Taylorville on Friday night at 7 p.m.

The Braves improve to 2-0. They will travel to Mahomet-Seymour for a conference matchup. Kickoff will be at 7 p.m. Friday.

“Mahomet’s good, they got a lot of talent this year,” Coach Etherton said. They have talent all over the place. So for us it is what are we going to improve on from week one to week two, and then what are we going to improve on from week two to week three. I think we corrected some mistakes from week one. And now we have to go back and evaluate and correct some mistakes for week two. I think even as coaches the same deal. I called some plays that I didn’t like and wished I could have back and it’s part of it and figuring out what our quarterback can do as a young guy.”