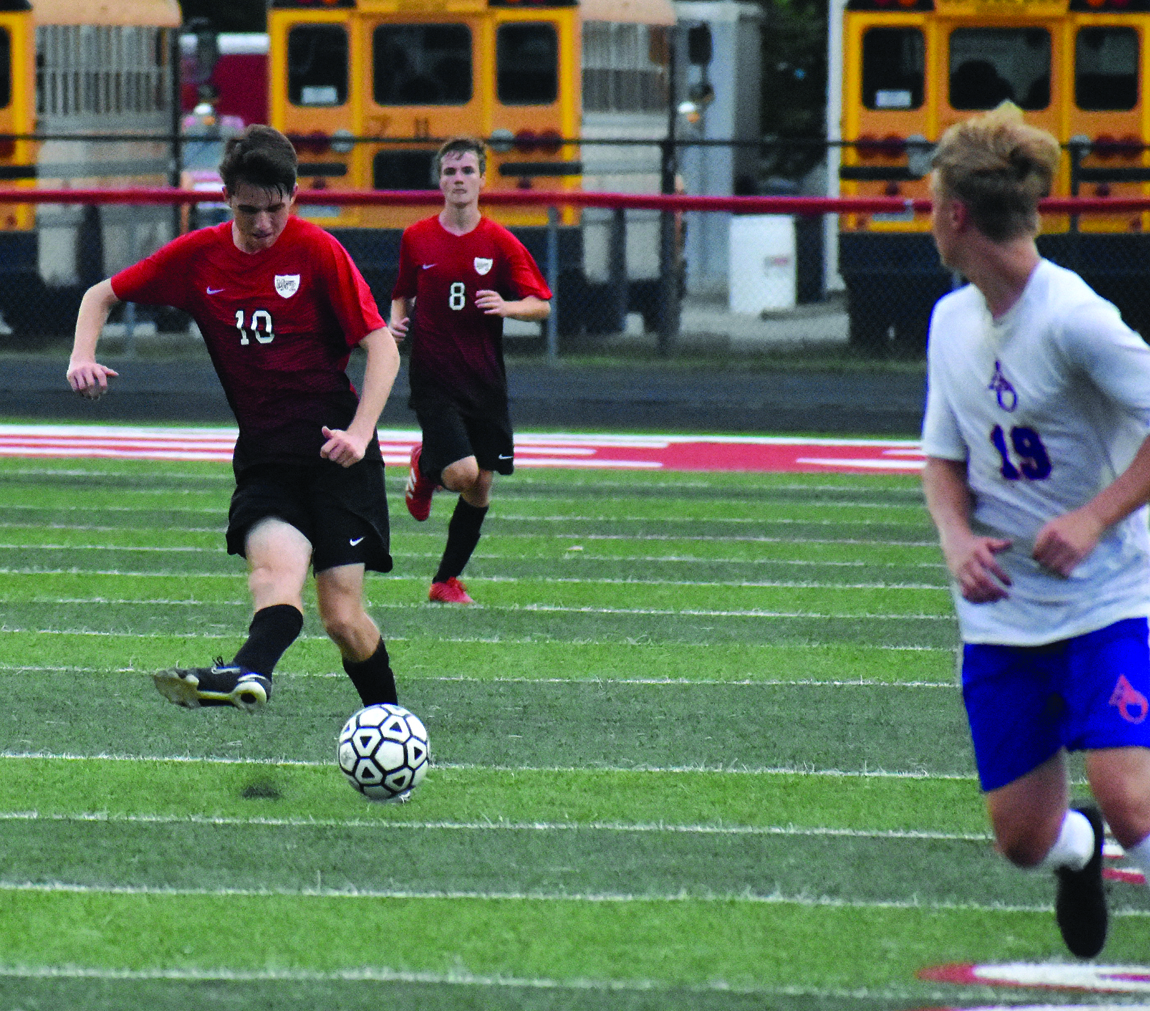 Zach Harvey attempts a pass in a 0-0 draw against Argenta-Oreana on August 23 at the Mt. Zion Football field.

The Mt. Zion boys soccer team started its season with one win, two losses and a tie. The lone win came against the Warrensburg-Latham Cardinals with a 1-0 finish off a junior Evan Griffith goal.

The Braves’ defense has swallowed offenses early. The Braves in their first two games combined for a total of five shots on goal.

Two factors have played into that happening: the back-four that is anchored by senior Logan Kendall and the ability of center-defensive-midfielder Jacob Zora. Both have gotten to the ball quickly and force offenders to turn the ball over and disrupt offensive attacks.

“They worked hard tonight and didn’t let guys turn when they didn’t have to let them turn,” Mt. Zion head coach Scott Crawford said. “They stepped up defensively and they communicated through it. So it was a nice night for both of them.”

In the game against Warrensburg-Latham, scoring opportunities were scarce for the Braves for the first 20 minutes. The Braves managed to put together offensive sets that were cut short. Then in the 29th minute of the game Griffith dribbles the ball into the center of the field about 12 yards out from the goal and fired a shot into the back of the net to give the Braves the only goal they needed.

“I thought we played much better this time around the second game of the season,” Coach Crawford said. “We put some things together defensively and we got a little better. And up top we got a little more creativity. So I’m happy with the way we played tonight.”

In the second half, Coach Crawford substituted sophomore goalkeeper Carter Bahls into the game to replace sophomore Joshua Garrett. Bahls made two diving saves, getting his hands outstretched to catch the ball and defend the shutout.

“That was good for him,” Coach Crawford said. “He needed that. I got two good sophomore goalkeepers, which we’ve never had at Mount Zion. So it’s kind of nice to have two young guys that can both play in the net when we need them.”

The Braves maintained their attack, but failed to score a goal. The Braves out shot the Cardinals 18 to two and had 9 shots on goal compared to two.

Against the Argenta Oreana Bombers, neither team could find the back of the net.

The Braves pounced the Bombers on the attack, shooting the ball 15 times and getting eight of those shots on-goal. Bombers’ goalkeeper Jonathan Austin saved the ball nine times and prevented the Braves from scoring.

Garrett got his first shutout of the season for the Braves. Garrett faced three shots on-goal that he was able to convert into saves.

The Mt. Zion Boys soccer team Is 1-1-2 overall. The Braves next game will be at home against Taylorville High School on Tuesday at 4:30 p.m.