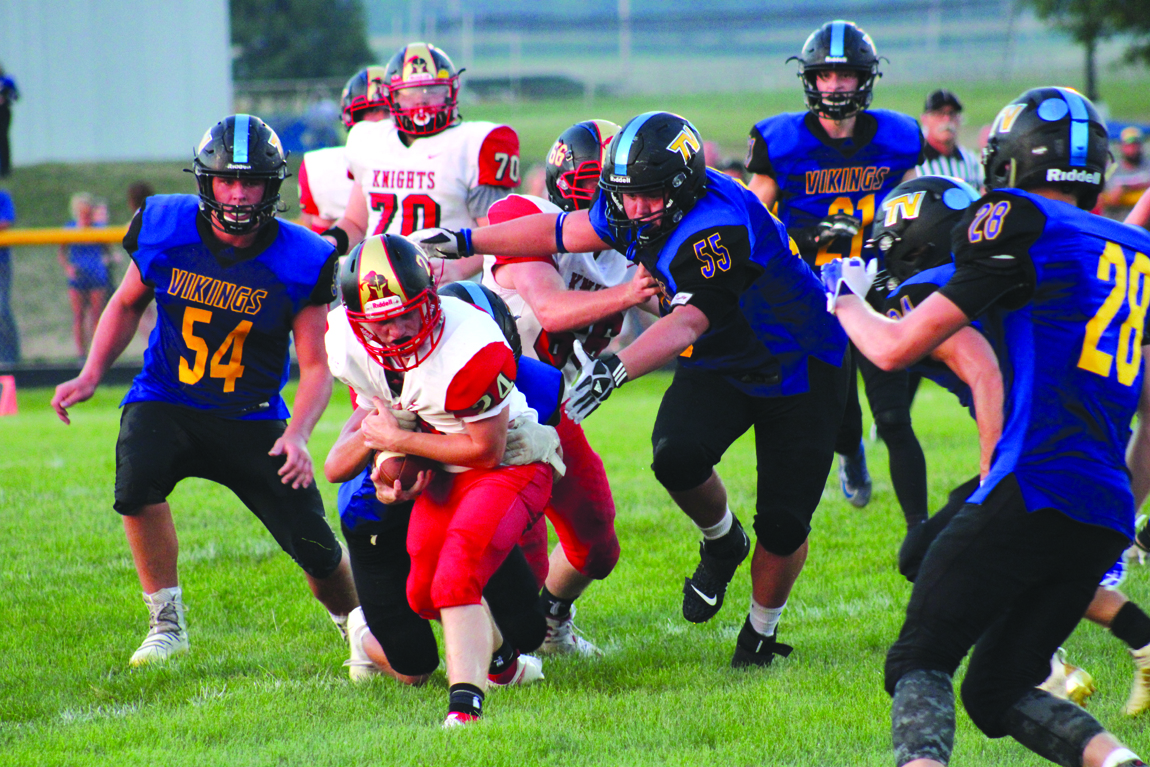 Running back #24 Mason Allen of the Arthur Lovington Atwood Hammond Knights football team tries to break free from the grasp of the Viking defender in the game at Downs last Friday, August 27. #66 Tanner Beckmier is blocking #55 of the Vikings.

The Arthur Lovington Atwood Hammond football Knights began their 2021 fall season on the road at Down Tri-Valley in a non-conference game.

The game started out well for the Knights as they held the Vikings on a fourth down play at their own 44 to gain possession for their first offensive series. The Knights moved the ball down to the six yard line on a couple of nice pass plays by quarterback Quentin Day. One of the passes was hauled in by Jayce Parsons for 32 yards and Kaden Feagin had a grab for 12 yards. Kaden also had a run of 13 yards in this series that eventually stalled at the 6. Chilton Ingram came in to attempt a 23 yard field goal but it was just off to the left. There had been just one possession for each team and there was only 43.7 seconds remaining in the first quarter.

Unfortunately for the Knights that was their only real threat to score in the game.

The second quarter would be huge for Tri-Valley as they would score quickly on their next possession and put the first points on the board to lead 7-0 with 10:43 remaining before half.

The visitors’ next series ended with a punt attempt that was blocked and the Vikings scored on their first play after. The Knights had a bad snap near the goal line that resulted in a safety for TV and they were in front 16-0.

Tri-Valley scored three more touchdowns before halftime and the score was 37-0 at the break.

The second half would be no better for the Knights as injuries forced many of the younger less experienced players into the game who gave their best efforts. Coach Jefferson posted on the Knight Pride football facebook page that he wanted to brag on the freshmen. He had this to say,

“We have 12 freshmen and every one of them played except for one who volunteered to film or he would have been in also. Most of our freshmen were outmatched physically, but you would be hard pressed to find kids who can match their heart!!”

The Vikings tried a field goal early in the third quarter but it failed. They would score one more td in the game with 5:45 left in the game, making the final score 43-0.

The Knights will have their home opener next Friday, September 3 at Wilson Field against the Meridian Hawks, another non-conference contest.

Be sure to come out early for the first Knights Fest 2021 Pregame Kickoff which goes from 4:00 p.m. to game time which is 7:00 p.m. It will be held on the practice field south of the football field. There will be inflatables, music, games, face painting, Kona Ice, and prizes. Students, families and all community members are invited.