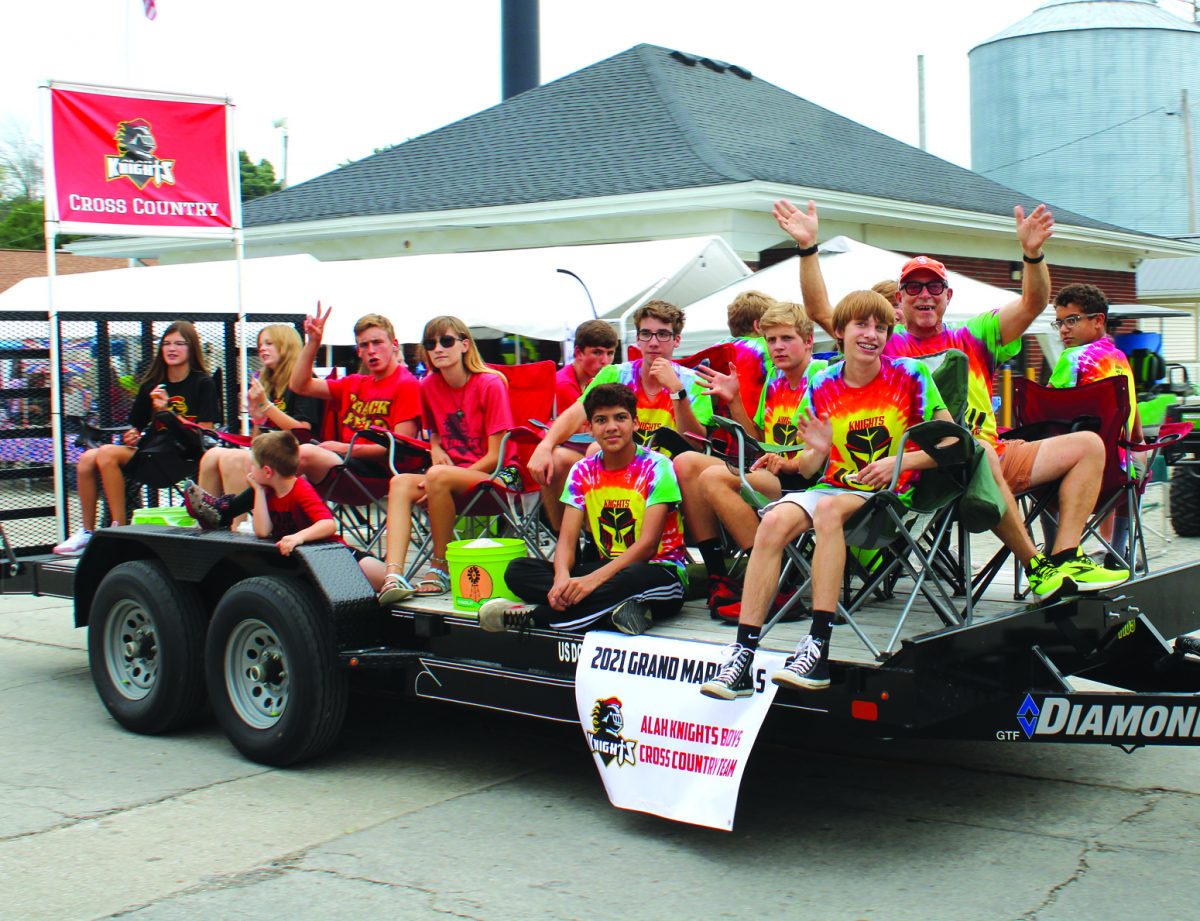 The ALAH Cross Country team served as Grand Marshals for the 27th Annual Atwood Apple Dumpling Festival Parade on Saturday, August 21. Shown here on the float are current members of the team. From back to front Maddie Kingery, Kayla Johnson, Steven Edwards, Emma Jones and Nathan Cogdill. Members of the 2020 State Runners Up are next with Jesus Corona sitting on the trailer and seated in the chairs are Jacob Duzan, Jace Green, Jacob Adcock, Coach Lyle Dorjahn and behind Lyle is Connor Edmonds. Members of last year’s champions not pictured here are Layton Hall, Logan Beckmier, Reggie Edmonds and Lyle Adcock.

The vendors are gone, stages down, the smell of festival food has left the area…the Atwood Apple Dumpling Festival is over for 2021. The wonderful thing is that it happened after having to cancel last year.

Where does one begin to recap the two days of fun? I am going to begin by saying a big THANK YOU to all of our sponsors for their support to make the Apple Dumpling Festival happen. Your generosity is overwhelming.

Next, we need to thank the Atwood Chamber of Commerce, Rajah Memorial Park Committee and loads of volunteers that helped in any way. It is hard to mention everyone, you know who you are, but I just have to give kudos to Markus Deel who is our “Guy Friday” for the chamber.

Markus is such a big help with any job we need in moving tables, chairs, building beer garden fencing, to sharing his pizza. And to the village employees, I know this is a lot of work, but it is sincerely appreciated.

Let’s talk about the American Legion Auxiliary apple dumplings with their “secret” sauce; then add one or two scoops of homemade ice cream on top from the United Church of Atwood. Now that is a combination you will remember for a long time. I don’t know what is in their “secret” sauce, but it sure is delicious. I think I could just take a spoon and eat the sauce. Better yet, put just the sauce on your ice cream. There are so many wonderful combinations. The ice cream is so yummy, it is good by itself or on top of a dumpling. Auxiliary treasurer Edie

Brandenburg said they sold all of their apple dumplings, which totals 900. The auxiliary and church would like to thank everyone who helped in anyway with the apple dumplings and ice cream…especially those who purchased and consumed this delicious duo.

The Atwood Christian Church made 303 of their delicious homemade apple dumplings and sold all of them. Sandy Carr told me they also sold out of most of their other food. She said they had a good crowd at their church, and they enjoyed the food. The festival sure lived up to its name this year.

The dessert auction was a success and the desserts were wonderful. I would have liked to have a taste of each one of them. Just teasing, but they sure looked delicious. Without the people donating, the Apple Dumpling auction would not have happened. Thank you all.

Marsha Burgener was in charge of the bike rodeo “Salute America.” After all the work she did getting things ready for this event, it was very disappointing that only two kids showed up with decorated bikes. However, Hannah Bailliez received first place and overall winner, and Brady Ellis was second place. These two kids did an outstanding job decorating their bikes. It always amazes me when people ask me why we don’t do anything special for the kids. Well, we do special events for the kids, but with the number of children in our area, and only two show up, what do we do? We commend Hannah and Brady for their involvement in the bike rodeo. Maybe more kids will participate next year. The two winners received a medal and cash.

Rant over, lets continue with the review. All of the entertainment this year was great. Mike Drake began the festival with the Star-Spangled Banner, after Village President Bill Fleming’s opening remarks. It was great. Next up was Gunny Sack with bluegrass music, then Battle Creek country. These local bands have always delighted our festival goers.

Saturday morning began early with the annual Shalynn’s Shuffle 5K with Tony Chapman of Bolingbrook taking first place and Kate Foltz of Tuscola second place. We will try and publish the remainder of the winners either this week or next.

A delicious breakfast was served by the Men’s Fellowship of the United Church of Atwood. There’s nothing like biscuits and gravy on a Saturday morning. Outside the church was the first annual Frank Bragg Memorial Antique Tractor Show with 25 “shined up and ready to go” antique tractors. Mark Bragg was honored to host this show in memory of his dad who hosted it for several years. His dad passed away in May, 2020.

Everyone loves a baby pageant. I sure wouldn’t want to be a judge for this pageant, all babies are cute. A picture with winners appears elsewhere in this issue. This also true for the Kiddie Tractor Pull.

The Rajah Memorial Park dedication went off in grand style. Those on the program were Kent Brown, Class of 1981; Rev. Matthew Perkins, Class of 2004; Ken Caraway, Commander of James Reeder American Legion Post #770 and legion members, Bill Fleming, Class of 1978, Danny Powell, Class of 1965. Approximately 75 former graduates and numerous guests were in attendance.

A big thank you to all the wonderful volunteers who have helped to date. A lot of work remains to be done, and volunteers are always needed. You can order engraved pavers at any time. Contact Marsha Burgener if you can help in any way, or like to order a paver. There have been approximately 400 bricks ordered to date.

Christmas ornament series #1 Atwood School Days 1884-1913 First School in Atwood is still available for sale at a cost of $10 with a $1 off coupon toward #2 in the series. They are available at the Atwood Library.

Let’s talk about the vendors. Jami Bowles did a fantastic job with 57 vendors plus the Bloodmobile, Douglas County Search & Rescue and inflatables. Jami said she really didn’t have any complaints, just compliments about what a nice selection of vendors we had and many of them said they want to return. A few thought COVID might have made a difference in people purchasing.

Now to our parade. Alora Murphy and “crew” work hard to have a nice parade. This year was no different, it was great with the ALAH Knights Boys Cross Country Team & Coach Lyle Dorjahn as Grand Marshals. We are always proud of our youth and we like to make it known. Thanks guys, good luck this year.

Alora made this statement, “The Atwood Apple Dumpling Parade “American Heritage” had a great come back after missing last year! The parade had over 70 entries with most of the Frank Bragg Memorial Tractors jumping into the parade. And the RAIN held off. It was great to see our ALAH Marching Band, many queens from the area and local fire departments.”

She continued, “We had 37 cadets and around 8 leaders for Lincoln’s Challenge. Everyone always enjoys having these young men or women in our parade. We fed them pulled pork and chicken and chips. The United Church of Atwood donated homemade ice cream and Homestead Bakery donated cookies. They were well fed and very appreciative. The large eagle, which everyone loves, plus the apple, were here for the parade. I would like to thank Norm Willoughby for announcing, Ronda Schumacher and Danita Lust for helping with the parade entries and Melissa Snodgrass, Ronda and Danita for helping feed the Lincoln’s Challenge group.”

Everyone enjoyed other entertainment such as the Prairieland Pickers, the funny ladies of the Keenager Kitchen Band, Coles County Barbershop group, Mackville plus the Andrew’s Family Magic Show.

Saturday night closed with the country band “Eldorado” from Nashville, Tennessee. They are composed of Joel Ellett, Brian Elmore, Laramie Messmore, Thom Edwards and Joe Engle. This group was very well received and everything went great.

All the chamber members gave a sigh of relief after it was over, the weather was great, even though it was hot and humid, there was no rain. Also, when planning began on the 2021 Apple Dumpling Festival, they were not sure it would happen, but it did, and for that they are very grateful. Last year, 2020, wasn’t a good year for much in the way of fairs and festivals or anything else.

I hope I have remembered everyone in this review, but I apologize if I left anyone out. Let me know, I will mention it next week.

Work will begin at the September meeting to start planning for next year’s festival. If you would like to be a part of the chamber, please contact Cindy Cordts, she will be glad to help you.

Thank you one and all for coming to the festival to make it a great success. We look forward to 2022.