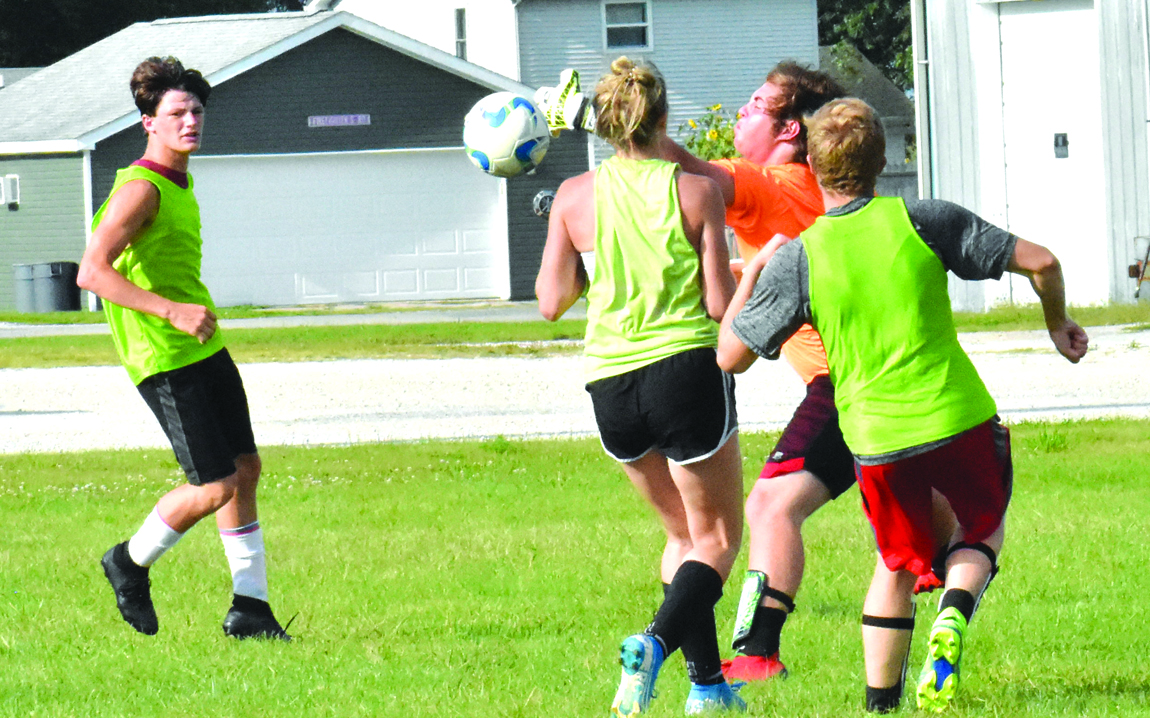 Goalkeeper Levi Ward gets a hand on the ball for a save in ALAH’s soccer practice on Wednesday August 19.

The Arthur-Lovington-Atwood-Hammond co-op soccer team is ready to improve its overall record this season. A team that won two games during the Spring is returning most of its team and new head coach Patrick Lindstrom believes his team has what it takes to win more games.

Coach Lindstrom will start his first year as a coach with the ALAH soccer team. He said that he is excited for his first season and that he has a lot of student athletes that put in a lot of effort and he is proud of that.

Coach Lindstrom and his team are aware that they have a tough season. As a team, he feels that they are ready for it and that they’ve been hard at work preparing for it.

Levi Ward will return to the Knights as starting goalkeeper. The team has six seniors on the team. Each of them were interviewed and all have different individual goals and ways they want to lead.

Carter Pratt wants to better himself and win more games as a team. He wants to lead by example and wants his team to come together and communicate more effectively.

Gavin Mechling’s individual goals are to double his goals scored from seven to 14. In terms of leadership Mechling wants to encourage others to do their best and keep trying even when the games are possibly out of reach or they’re down in a game.

Alexa Miller’s individual goals are to be a good teammate, leader, push herself to stay in shape, play soccer and have fun her senior year. I’m terms of leadership, Miller wants to encourage everyone to work hard and be good teammates.

Kaitlyn Zander’s individual goals are to be as prepared for games as she can and when playing goalkeeper block as many goals as she can. In terms of leadership, Zander wants to get the younger kids in shape and ready for the season so they are prepared.

Jordan Pratt’s individual goals are to win at least half of her last season’s games and go out senior season hard. In terms of leadership, she wants to bring everyone closer together as a team and not be distant.

Payton Rawlings’ individual goal for the season is to build up stamina to play 20 to 40 minutes at a time, improve and learn as much as he can in his first year of playing soccer. In terms of leadership, he wants to do his best and be a leader in every sense of the word whether that’s helping someone that needs help or fixing a miscommunication.

In practice, Coach Lindstrom and his team have worked on improving players personal skills, tactics and tactical approaches to the game.

The overall message that Coach Lindstrom wanted to send to his team is to have patience with his team.

“Because I’ve only been doing this a week and a half, it’s gonna be a slow start, but we will progress by mid-season,” Coach Lindstrom said. “And if we can get fans out to cheer us on, for these student athletes would be awesome.”