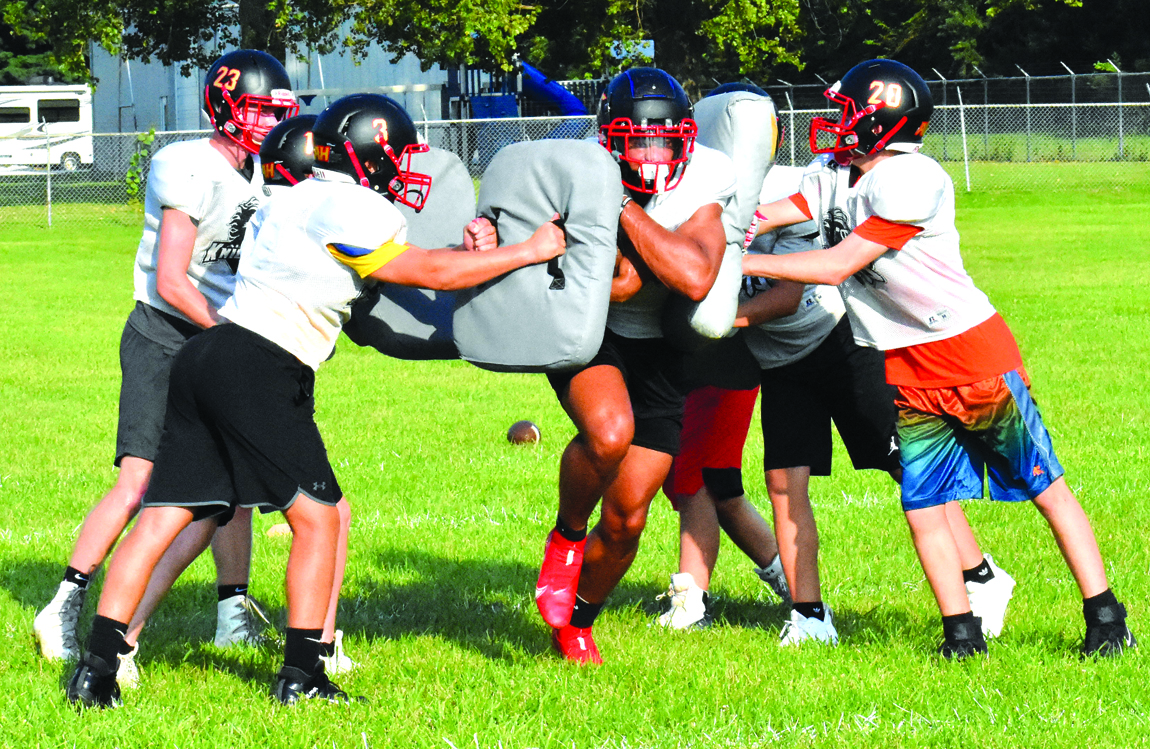 Kaden Feagin runs through the contact pads at practice on Friday, August 13.

The Arthur-Lovington-Atwood-Hammond football team is hoping to make the IHSA playoffs for the second time in three years.

ALAH head coach Ryan Jefferson said him and his team are excited about this season. He went on to say that the team was very fortunate to get all six games in and that the team is ready for three more additional games.

The team is a mix of three seniors, a big bunch of juniors, a few sophomores and a big bunch of freshman. The seniors are Quarterback Quentin Day, Tight End and Edge Rusher Austin Abercrombie and Fullback and Outside Linebacker Max Allen.

Day was unavailable for comment. Prior to this year, Day was a utility player who played different positions such as running back, quarterback, wide-receiver and other offensive and defensive positions. This year Coach Jefferson said Day will only play quarterback.

Abercrombie said one of the biggest things he worked on in the offseason was offensively his speed and catching ability. Defensively, he worked being able to use his hands just as well as his feet to get around people and get to where he needed to be. Abercrombie’s goals are to make the playoffs his senior year since there was no playoffs last year due to the pandemic. In terms of leadership, Abercrombie wants to set the tone with leading by example.

“Leadership wise, I really hope to really set the tempo for constant hard work as what you do in practice will show up in games,” Abercrombie said. “And while we may not have many numbers we should certainly make up for it in quality.

Allen worked on his speed and form tackling by using his body to get better leverage over other players during the off-season. Allen’s goals for the season are to have an overall winning record and win the Lincoln Prairie Conference. Allen’s leadership goals are to set an example for the younger players for the future.

“We have a lot of freshman,” Allen said. “So I think just helping develop them into good athletes for the future and more so being a good example of how to go about football in the future.”

Coach Jefferson said that these seniors are part of his first freshman class at the school. This is Coach Jefferson’s fourth year with the program and expects this year to be a special year.

Other players that Coach Jefferson is expecting to have important roles on this team are primary running back Kaden Feagin who is already receiving attention from the University of Illinois. Also on offense Max Allen and Mason Allen will be in the backfield for the Knights. Other offensive players expected to have an impact are Abercrombie and sophomore Landon Waldrop. Defensively, the Allen brothers will make an impact as well as Noah Garrett at the linebacker position. Cody Cornwall will be a key offensive and defensive lineman. Drew Cotton will also be a lineman and linebacker.

During the off-season, the focus was for players to get healthy and stay healthy. Multiple players had nagging injuries from participation in spring sports.

The overall message Coach Jefferson wanted to send to the readers and the community is that the players play with a lot of heart.

“There’s definitely a lot of talent on the field, but they’re not going to give it their all, regardless of the outcome,” Coach Jefferson said.

The ALAH Knights open their season this Friday on the road against Tri-Valley. Kickoff will be at 7 p.m.