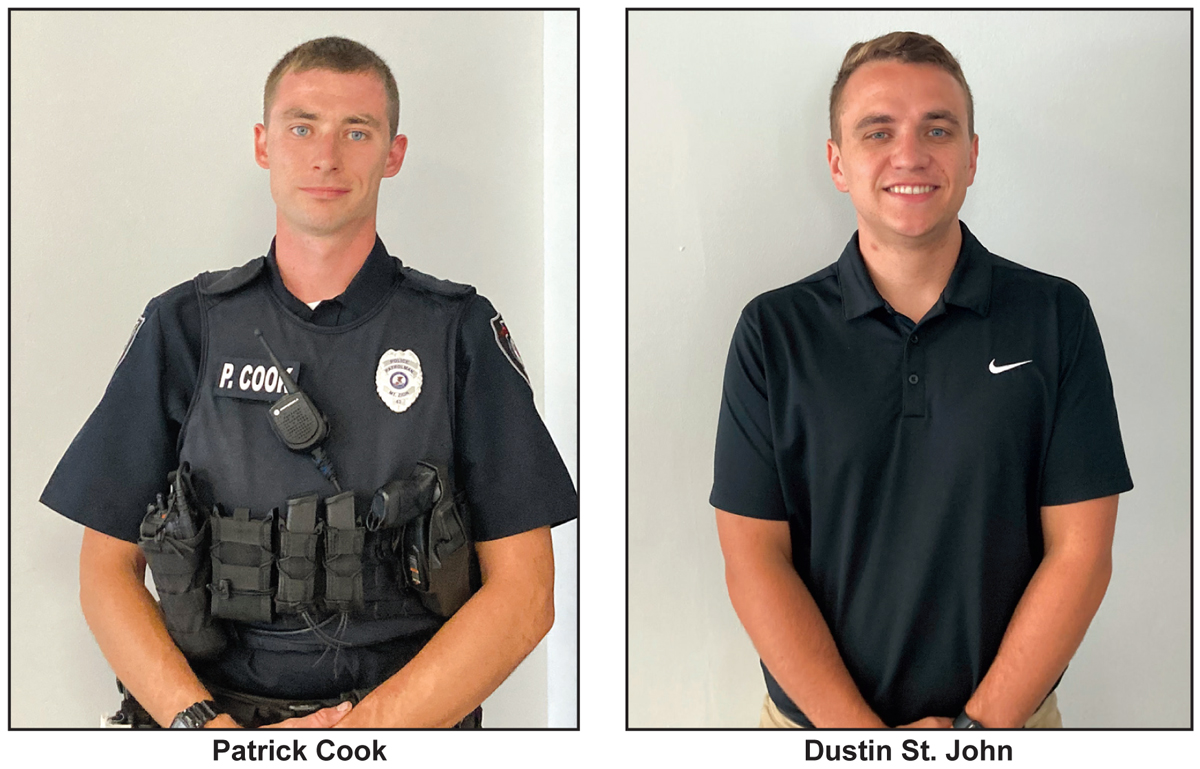 Cook is from Cerro Gordo, Illinois and attended Cerro Gordo High School. He has had an interest in law enforcement since he was a senior in high school. Cook’s first step into law enforcement eas at 19 being a civil process server where he served basic paperwork such as subpoenas, divorce paperwork and bank paperwork. From there he went on to animal control for a year where he answered complaints in the community, investigated ordinance violations, investigated animal cruelty cases and did welfare checks on animals.

For three and a half years, Cook worked at the jail in Decatur serving as a Field Training Officer and Taser instructor on second shift. The whole time his goal was to become a police officer.

“It’s a good feeling, but it’s just one of those things that’s a step,” Cook said. “Take it a step at a time because I’m not there yet. Really. I’m here, but I have a lot to learn before I can start doing the job on my own.”

St. John is from Mattoon, Illinois. His father was an officer in Mattoon and St. John’s experience so far includes going on ride-alongs and will start the police academy shortly. St. John said he hopes to learn a lot from the academy, fellow officers and from experience in his first year.

St. John also said that his father was what inspired him to get into this profession.

St. John is married and likes being outdoors, hunting and hanging out with his family.

St. John in his first year hopes to accomplish meeting a lot of people, helping get a lot of good done and protecting anybody he needs to protect. Cook in his first year wants to learn as much as he can learn from everyone that works at Mt. Zion Police Department, get a good foundation of the calls he will have to respond to and how to handle them, that helps the public and keeps everyone safe, do the adequately that has the best outcome in situations that they handle.

Mt. Zion Police Department Chief of Police Adam Skundberg said that three will be a lot for these two new officers to take in in their first year, but the number one thing is for them to be fair and that recruitment numbers are down.

“I mean, they both kind of have that background,” Chief Skundberg said. “The numbers are down, but as far as recruitment goes, the number of people taking the test is down. But bringing those guys on and finding the quality of candidates is actually still very good.”

St. John’s overall message he wanted to send to readers and the community is that he promises to be a good officer, to treat everyone fair and will always be there for anyone that needs help.

“I’m never going to turn my back on anyone,” St John said. “I promise to do my best and help serve this community.”

Cook’s overall message is similar, but added that he wants to keep everyone safe.

“I know law enforcement has a negative connotation right now,” Cook said. “Mount Zion is very supportive so far in my experience. I really like that about being here. It’s like people know that it’s just everyday people that have been here for years doing the work. And there’s still people that want to do the job that want to do it for the right reasons.”