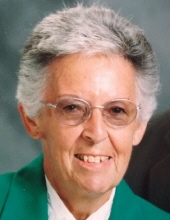 Funeral services will be held 1:00 p.m. Monday, August 9, 2021, at McMullin-Young Funeral Home, Sullivan. Visitation will be held an hour prior to the service Monday, at the funeral home in Sullivan, the family requests casual attire. Face masks are suggested and please practice social distancing for the services. Burial will be held at a later date in Greenhill Cemetery, Sullivan. Memorials may be made to Moultrie County Illinois Paws; 10 Leisure Acres, Sullivan, IL 61951

Elaine was born on April 25, 1928, on a farm South of Divernon, IL, the daughter of John and Nona (Stevens) Curby. She grew up in Pawnee, the youngest of 8 children. She married Dennis Dale McElvain on September 12, 1950, in Pawnee; he preceded her in death on December 2, 2003.

Elaine and her husband built and operated “Mac’s Motel” in Atwood, IL, for many years. She also drove a school bus and was Garrett Township Clerk. Elaine was a member of New Life Church, Sullivan American Legion Post #68 and the Daughters of American Revolution.

Elaine was an avid golfer and fisherwoman.

She was preceded in death by her parents, husband and daughter Connie Reedy.