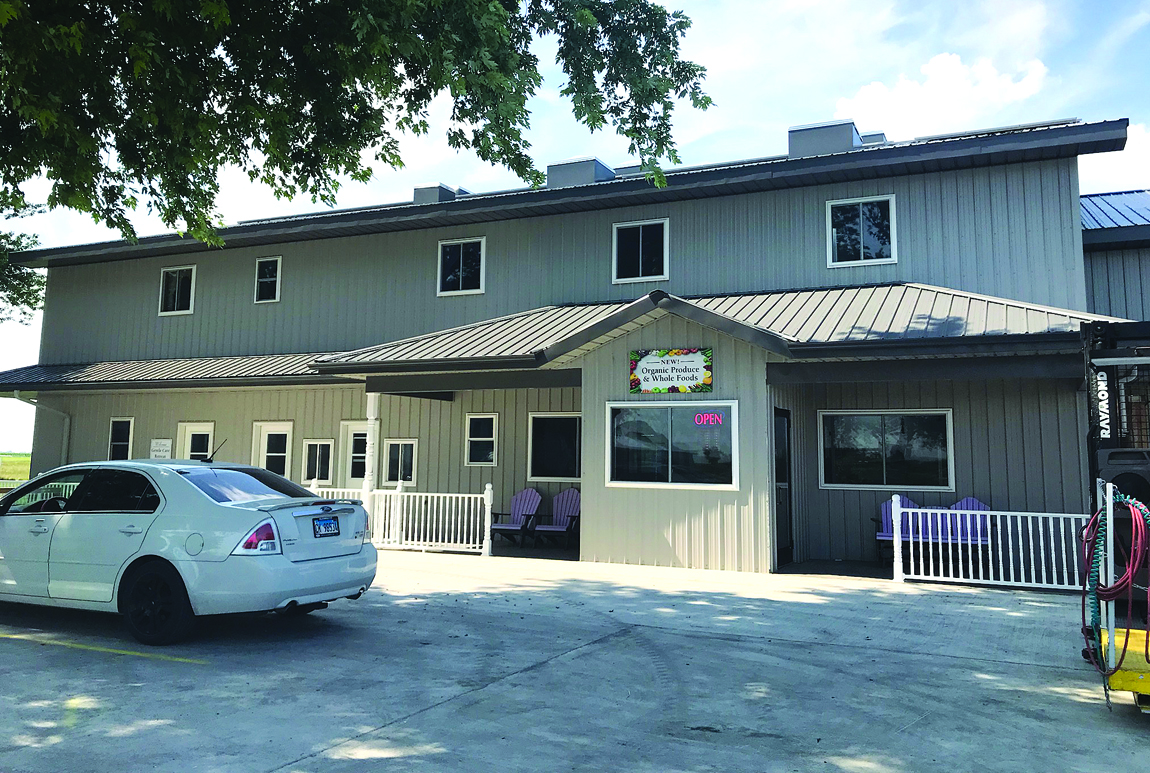 You have heard it said that God works in mysterious ways, and that has proven true in the case William & Elizabeth Schlabach, owners of Meadowview Herbs, organic produce and whole foods. The brand-new store is located at 160 E. CR 240 N., Arthur or ¼ mile south and ¼ mile west of Beachy’s Bulk Foods or 1 1/2 miles south and 1 ¾ miles east of Arthur. Any direction should get you in the right place.

In order to truly understand the story behind Meadowview Herbs, you have to know Elizabeth’s story. In 2013, Elizabeth contracted Lyme’s Disease. She became very ill and was unable to function. They do not believe in regular medical doctors; they believe in natural healing.

However, as much as Elizabeth researched, she didn’t find an answer. She was getting very frustrated and her health was not improving. She is also pre-diabetic which didn’t help matters. She had no energy, brain fog, muscle pain and joint issues.

Lyme’s Disease is a virus and usually contracted by a tick or Elizabeth says she learned it could be inherited. Her father has had Lyme’s Disease. She also found out that you can have it in your body 10-15 years and then something triggers the disease. Elizabeth said as a kid she never had much energy; she was very calm and quiet. This has led her to wonder if she has had it for years and it showed up in 2013.

Elizabeth contacted a Nature path Doctor in Florida. It was suggested she go to zero sugar and limit her fruit intake due to sugar content. Until she came down with Lyme’s Disease, she had never had much of an interest in anything organic.

After continued research, Elizabeth went against doctor’s suggestions and decided to follow her own regiment, she ate raw vegetables and fruit, especially blueberries. She said she ate lots and lots of blueberries. If nothing else was working, what did she have to lose? She ate what she wanted and that was organic fruit, because there are no chemical sprays.

Elizabeth also had psoriasis and it went away when she stayed away from chemicals. She also uses chemical free soaps.

William and Elizabeth traveled to larger organic markets in St. Louis and Chicago. With all her research, the couple became interested and studied how to make their own herbal extracts (tinctures) and essential oil blends. In 2016 they went wholesale and now ship to 2,500 retail customers and 65 wholesale stores.

They worked out of their home for six years and then decided to add organic foods. They knew if they did this, they would have to have a bigger store, not the small one in their home. Once you pull up to their brand-new store, which opened the first part of June, you will be amazed.

It is a beautiful store with many organic products and coolers with fresh organic fruits and vegetables, plus other items.

In season they have local organic vegetables, potatoes, onions, zucchini and watermelon when ripe.

William and Elizabeth are very knowledgeable in organic items and carry supplies to make your own extracts (tincture) if interested.

Their open house was held last weekend. They have been running ads in our newspapers that explains more about their store. They want you to understand that conventional food is raised with toxic chemicals, herbicides and pesticides. These toxins and chemicals build up in our body and cause all sorts of health issues—allergies, obesity, sinus inflammations pain, and chronic health issues. As the Schlabach’s say, “Your food is your medicine, choose it wisely.” William states that Elizabeth is the one that has done most of the research on how to help herself.

William and Elizabeth and their family are very excited about continuing their venture with organic foods. They promise to give you a good quality product at a fair price.

As I stated at the beginning, God did work a miracle in the lives of William & Elizabeth Schlabach and their family. Elizabeth never gave up in researching what could be done to improve her health. This is a team working together to help others. Their lives have been led in a good direction, all because of the Lyme’s Disease, a direction they never expected.

Now Elizabeth is able to live her life in a healthy and happy way. It has made the whole family happy. She stays busy with the store and thanks God for staying with her every step of the way.