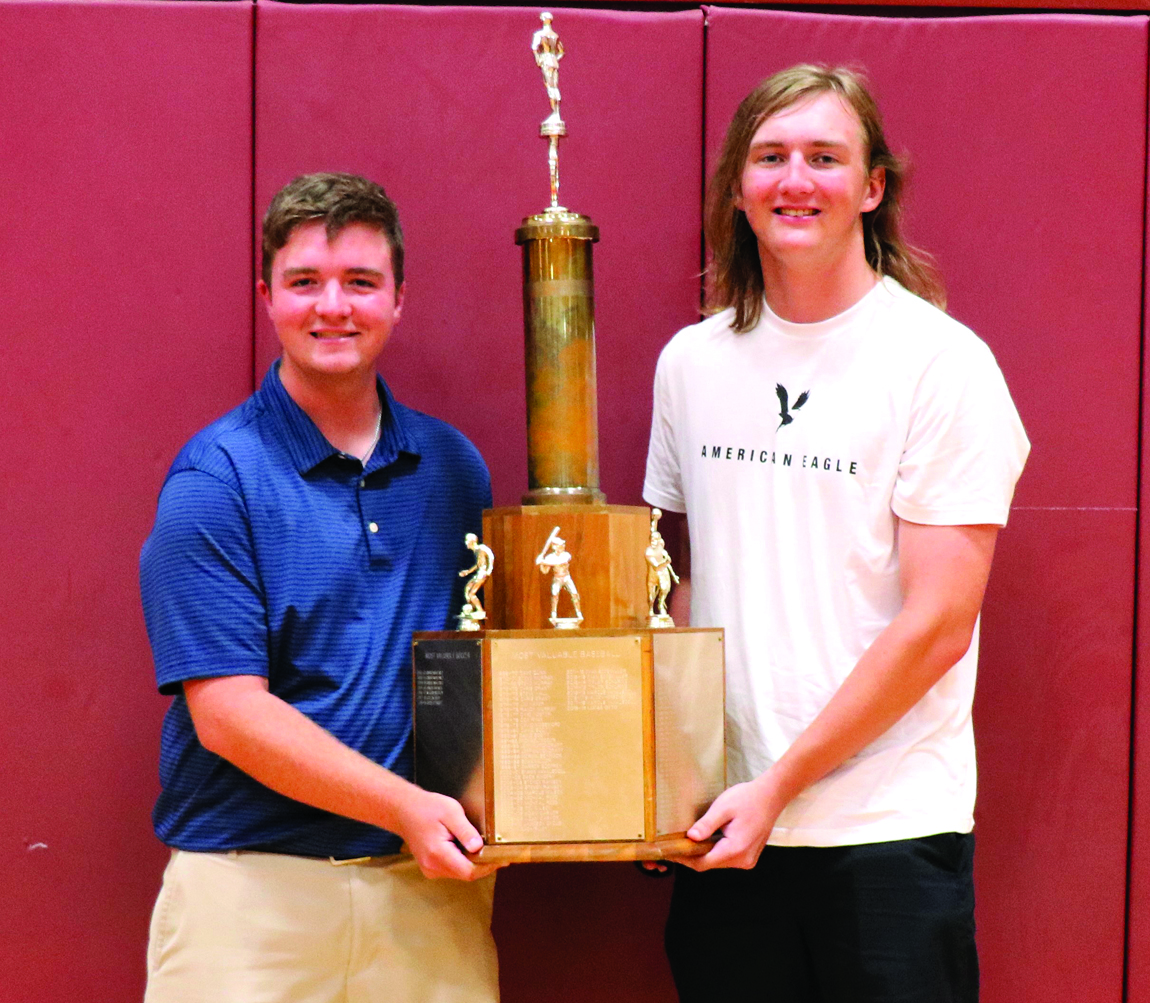 Senior baseball players Logan Brough and Nik Miller were named the Co-Most Valuable Players for the 2021 season. They are shown here with the boys’ MVP trophy and will have their names added to all the past baseball MVP winners. 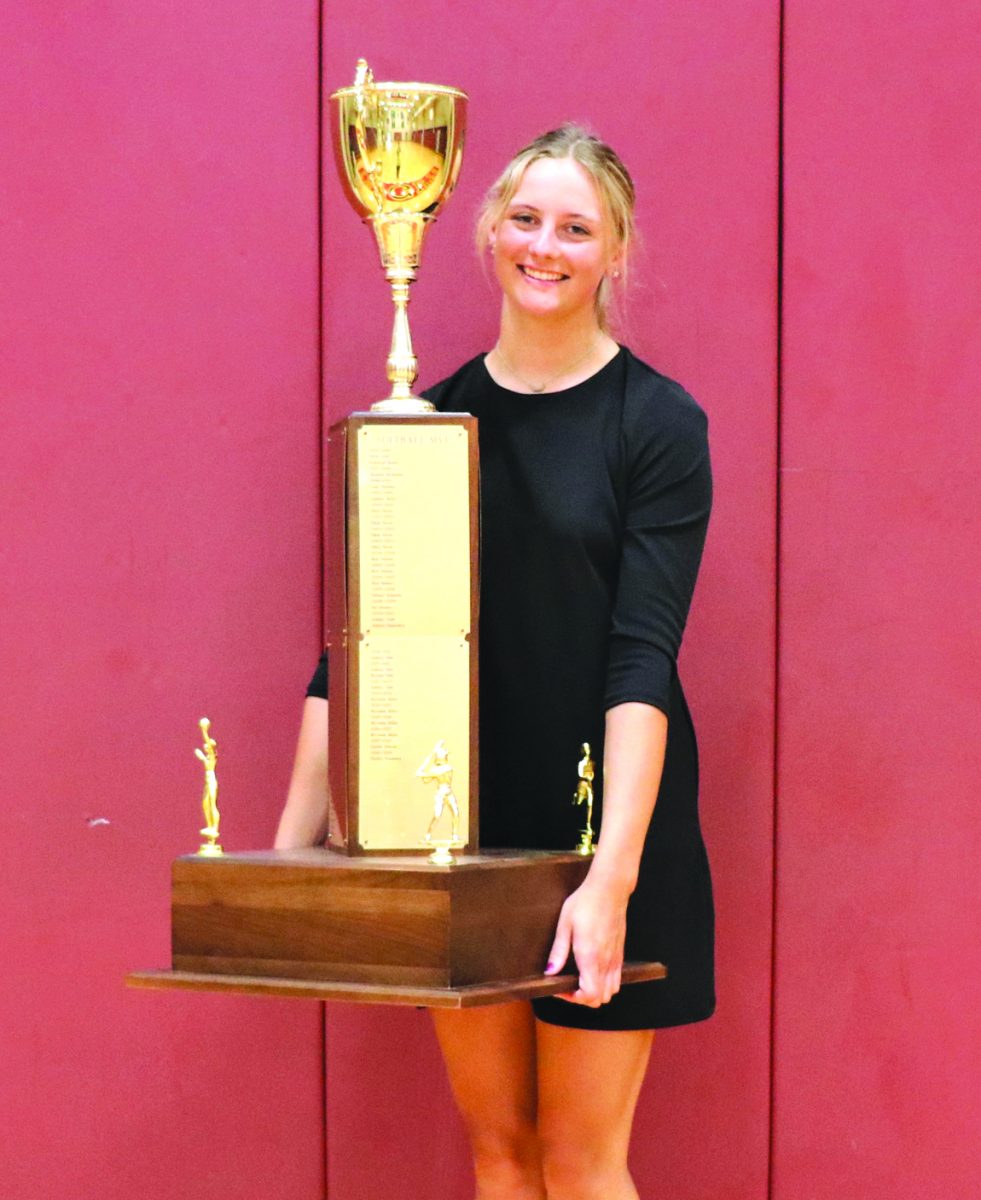 Pictured here is Makenzie Brown with the girls’ all sports MVP trophy. She was named ALAH Softball’s Most Valuable Player for the 2021 season. Makenzie will have her name added to all the past winners of the softball MVPs. 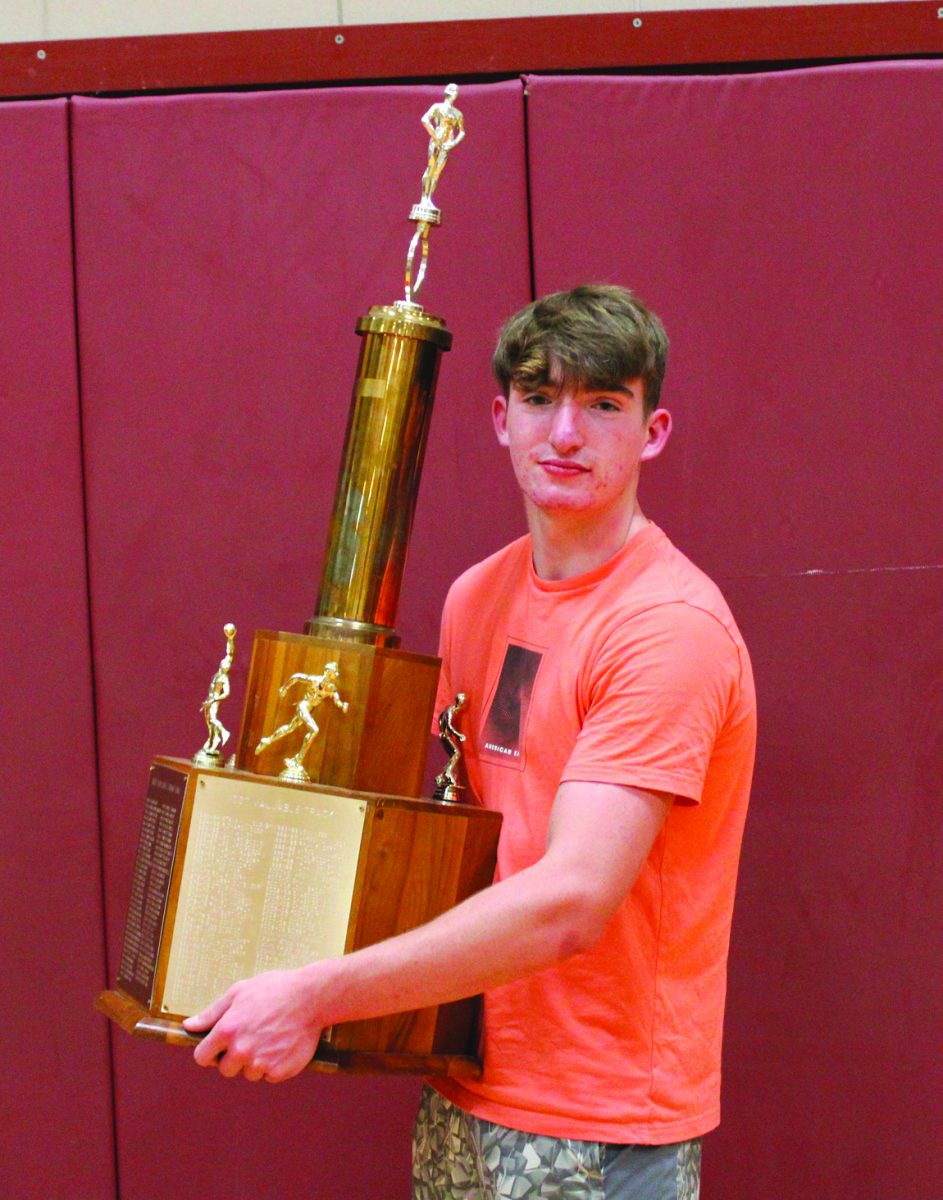 Junior Max Allen is pictured here with the ALAH boys’ MVP trophy. Max will have his name added to the track plate with all the past winners of the Most Valuable Player award for track and field. 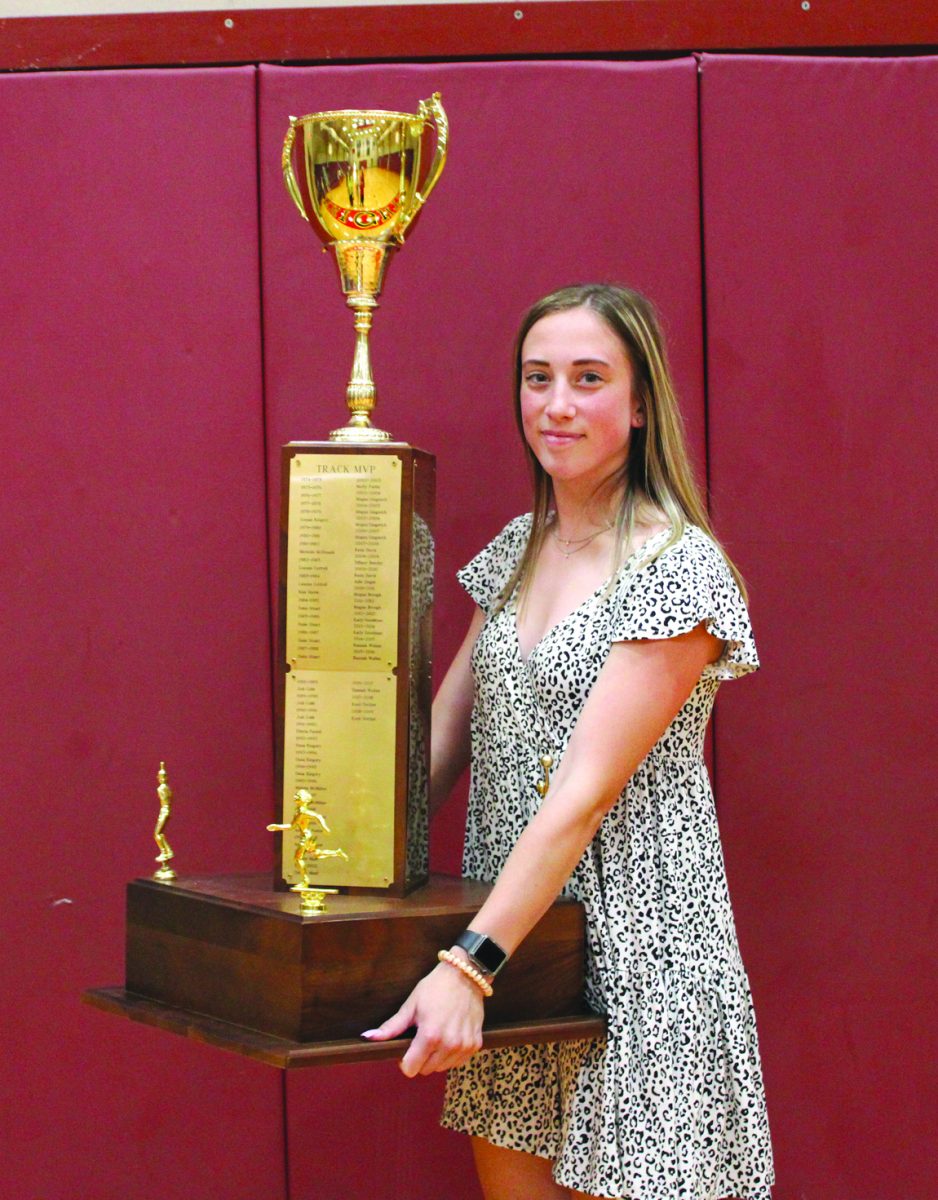 Alexa Miller is shown here with the ALAH high school girls’ MVP trophy. Alexa will have her name inscribed on the track plate with all the past winners of the Most Valuable Player award for track and field. Miah Malin won the Most Improved for girls’ track but was unable to attend.

The Arthur Lovington Atwood Hammond baseball, softball and track and field teams were honored at the Athletic Awards Night held at the high school on Monday, June 28.

Athletic Director Nathan Seal welcomed everyone as all athletes and families began the evening in the east gym. He said he was often asked how his first year as A.D. went and he said, “Crazy”, it was a crazy year—crazy busy, crazy confusing, crazy stressful, but crazy good!!!” He mentioned that on the year all teams were 74-34-1, there were several All-State athletes, coaches of the year, we won a regional, two sectionals, one super-sectional, a fourth place state trophy and a seventh place finish at the state track meet. He was sure there would have been more if the other sports had been able to have their post seasons.

Mr. Seal then thanked several people that made the Spring/Summer seasons such a success. These included Miller Bus Service, trainer Chris Dansbury, all the communities and their extreme enthusiasm, the ALAH faculty, the Board of Education, the high school and unit office personnel, Doug Davis, Brad McGill and Matt Schrock of the roundtable.tv, parents, coaches for their energy, passion and commitment, and all the athletes for their hard work and dedication.

He then introduced the individual coaches to give a synopsis of their seasons.

High School girls’ track Coach Ryan Jefferson was first up. Coach Jefferson said since he had just recently become a girl dad coaching girls track had been a great experience in helping him with that. He spoke about having just ten girls and one being injured early on so most meets they competed with nine but they overachieved, finishing 7th out of 11 at conference and 10th out of 15 at sectional which is hard to do when you can’t fill many events. Also, having Alexa Miller make it to State in the triple jump and finish 14th out of 29 was very enjoyable and she missed making it in the 100m by .04 seconds. In every meet, “they competed their hearts out “ and he sees this season as a stepping stone to next year as there were no seniors and we will be looking to add more girls to the squad. He thanked Assistant Coach Ashley Snoddy and

Coach Lyle Dorjahn for their help with the girls’ team.

Matt Thomas, boys’ head coach was next on the program. He said this was his third year as coach and was his favorite season as the group had fun, but also worked and competed hard. Coach Thomas mentioned their successes, winning the Lincoln Prairie Conference meet and

Sectional by very large margins and related how other teams were wondering, where the heck is Arthur and who are these guys?

The Knights sent ten boys to the state meet in eight events and finished 7th in the team standings out of 75 teams that scored. “We have a solid core, are losing some great talent but with the help of those seniors if they can come back and help we can build back up the tradition of track here.

Coach Thomas closed with a story about senior Aaron Likens who came out for track for the first time. The story was about Aaron’s first hurdle race which we should just say did not go the best. Coach Thomas went up to Aaron thinking he would be ready to quit but he wanted to come back for more and try the race again and do better. That attitude carried over to the whole team for the rest of the season.

Head Coach Bob Silvanik took the podium next. He began by saying just how grateful he was that they were able to play especially after last year’s season cancellation. He thanked the leadership of the school, “who did everything possible to get us to play.” Coach Silvanik thanked Doug Davis and the roundtable, Bill Coleman and the maintenance staff for getting the field ready every day, and his assistants Tracy Hood and David McGrath who he said were really two more head coaches.

The Knights baseball team finished 11-10; played some 2A and 3A teams; beat Tuscola and Monticello; beat Arcola 10-0 and Sullivan 14-9; defeated Casey Westfield in regional play, in an instant classic that avenged an earlier loss and played in the regional final for the first time since 2005.

Softball was the finale of the Spring sports. Head Coach Jerry Lane was unable to attend so Assistant Coach Dana Tinkle spoke on the season by saying, “What a ride!!!” The season started with a win over perennial powerhouse Casey Westfield after just one practice; it also included wins over Mt. Zion, Stew-Stras, Cumberland; winning the Lincoln Prairie Conference crown undefeated. Then in post season play wins over St. Thomas More, Salt Fork, Meridian, and LPC foe, Argenta-Oreana; a fantastic Super-Sectional win over Ottawa Marquette and then on to the State Finals. “We lost the first game to Effingham St. Anthony and were down a bit, but then “a sea of little girls came up to show their support and get their homemade t-shirts autographed by the big girls.” The team picked themselves up and went into the third place game vs. Orangeville. The game started well but then unforeseen circumstances turned things the other way but there were still high fives and big smiles and the girls gave it their all. Everyone is very proud of them, they made history and now we just need to keep the tradition going.

Before breaking up into the individual sports for their team awards, Mr. Seal introduced the Lincoln Prairie Conference All Conference selections and those chosen for All-State for the four sports.