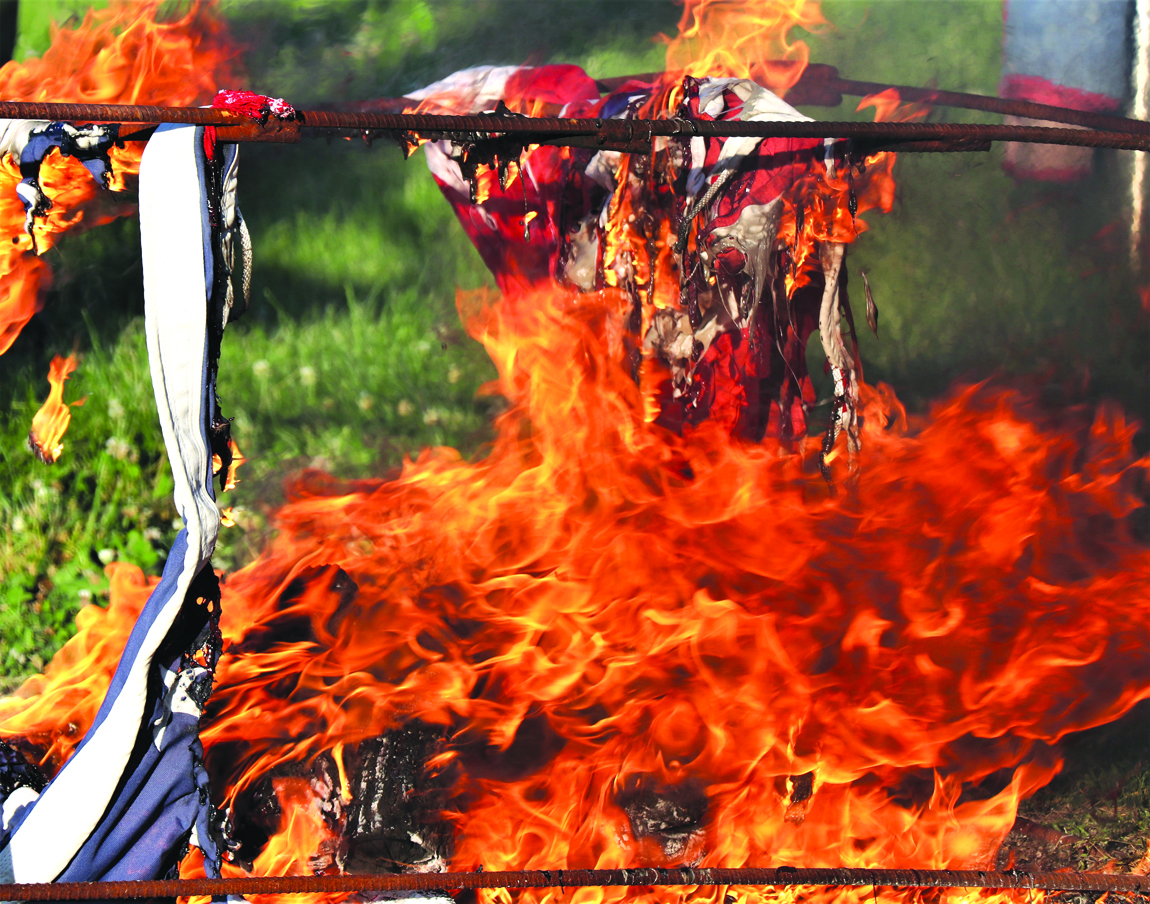 The retirement of over 600 worn flags that have flown high to represent this great country of ours was held on Flag Day, June 14

Flag Day was last Monday and the annual tradition of retiring worn flags was held at the Lions Club Park Pavilion for the proper disposal of more than 600 flags, collected at Kenney’s Ace Hardware and the Village Barber Shop over the last year. This program had traditionally brought together various local groups and this year members from Mt. Zion Boy Scout Troop 43 and Cub Scout Pack 43, girls from Scout Troop 475, Venturing Crew 343, BSA Troop 202 of Decatur, and American Legion Post 475 of Dalton City participated in the ceremony. Over 25 scouts from Cub to Eagle took part.

June 14 was also the U.S. Army’s 246 birthday which originally consisted of volunteer soldiers with roots to the Continental Army and was formed to fight the Revolutionary War. Today, as the largest branch of the U.S. Military, the proud men and women continue to provide peace and security for all of us.

Susan Montgomery, assistant scoutmaster for Troop 43 said the ceremony has never once been rained out in 22 years.

Montgomery added, “We have volunteers that man the fires, we have the Mt. Zion Fire Department here in case there’s some kind of an accident, somebody trips and falls or gets burned.”

The ceremony began with the presentation of colors and the Pledge of Allegiance. Cailyn Crockett, Second Class Scout from Troop 475, read “I Am Your Flag” by Msgt. Percy Webb. The poem explains that the white stripes on the flag signify the tears of those who have lost their sons, the red stripes for the blood spilled to defend our nation, and the flag’s blue field symbolizes God’s heaven under which the flag flies and the stars for the 50 unified states.

Members of the American Legion and Macon County Honor Guard led the inspection of the flags. After it was determined necessary to retire the flags, a prayer was offered by Paul Christensen, Dalton City American Legion Chaplain.

Those in attendance were asked to stand for the retirement of the first flag of the evening. The largest flag was unfolded first, and ceremonially inspected, then a group of Scouts carried it to one of the several fires that were already burning and carefully placed it over the frame built for the purpose, to keep the flag from touching the ground.

Under the Flag Code, adopted in 1942 under President Franklin D. Roosevelt, a worn flag is to be burned and those taking part in the ceremony should salute the flag, say the Pledge of Allegiance, and never let the flag touch the ground during the process.

Following the flag retirement detail, Troop 475 conducted the US Flag folding ceremony which consists of 13 folds, each having a different meaning. Henry Blunt, Troop 43 played taps followed by the reading of “It’s The Soldier” by Chip Platt, Venturing Crew 343.

At the end of the program all the veterans were recognized and given a memento and everyone in attendance received a flag lapel pin. The ceremony ended with the retiring of the colors and the playing of God Bless the USA.

The Boy Scouts of America began allowing girls to join in 2019, and because of COVID-19 restrictions last year, the girls in Troop 475 had not had a chance to participate in a flag retirement until now. “We have 9 girls total and we’ve got three here today and we’re very honored to be here,” Scoutmaster Mark Potter said.