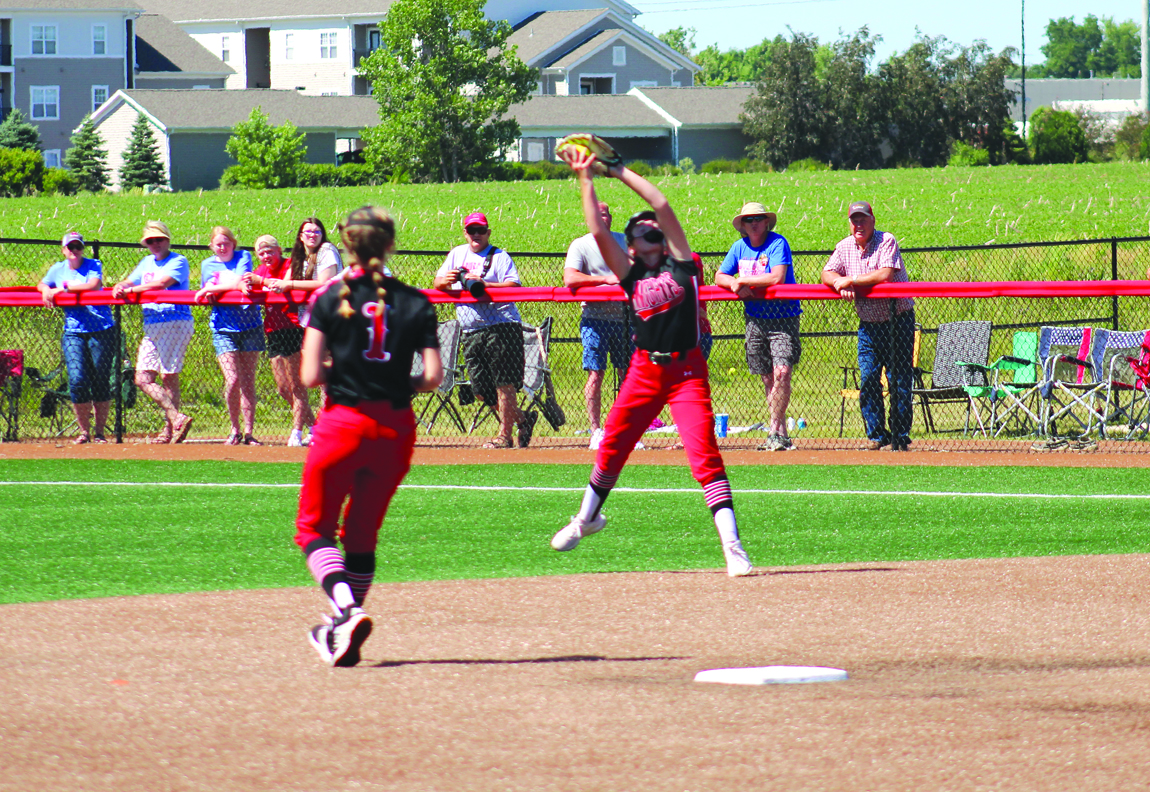 Knights’ second baseman, Kaci Beachy makes a great catch of a flyball during the State semi-final game against the Effingham St. Anthony Bulldogs. Teammate Alisha Frederick looks on as Kaci snags the ball for the out.

On Wednesday, June 16, the Arthur Lovington Atwood Hammond Knights traveled to the Louisville Slugger Complex in Peoria to compete in the Class 1A state softball tournament, the first appearance at state in program history. After Monday’s supersectional win in Bloomington,

Coach Jerry Lane remarked that, while of course very happy with the 1-0 win, the Knights needed to get their bats going to continue winning. Unfortunately that was not to be, at least in the first game of the day in the fight for the state championship which took place at 10 a.m. against the Effingham St. Anthony Bulldogs. Once again, many loyal fans were on hand to cheer on their Knights on a bright, sunny and warm day. The Knights fell behind early and could not recover in a 4-0 loss.

The St. Anthony pitcher gave up five hits and struck out five with no walks. ALAH pitcher Makenzie Brown took the loss allowing nine hits and four runs while striking out nine. Kailee Otto led the offense for the Knights with two hits in three at bats.

In the top of the first, St. Anthony scored one run after hitting a single and a double. The Knights were unable to answer with any hits of their own. In the second, St. Anthony scored once again on a couple of hits. Knights players hit the ball in the bottom of the inning but unfortunately they were hit right to opposing players who were able to field them easily.

In the top of the third, a triple and a passed ball brought in another run for the Bulldogs. The top of the fourth brought a stop to the one run per inning theme for St. Anthony and the ALAH players record a couple of singles in the bottom of the inning but were still not able to score.

The top of the fifth brings a pop up, strikeout and ground out for the Bulldogs half of the inning. The Knights get another single but can’t get hits past the St. Anthony players.

The top of the sixth shows two strikeouts and a ground out accounting for the Bulldogs taking a seat and, once again, the Knights cannot generate a hit in the bottom of the inning.

In the top of the seventh St. Anthony scores its final run on a fielder’s choice but the Knights make a couple of exciting defensive plays throwing out a runner at home and picking a runner off third for the final out. The Knights do finish the game with a couple of hits but are unable to put any runs across the plate. As Coach Lane noted after the game, “We were hitting the ball but we couldn’t get the timely hits when we had to.”

Although disappointing after 18 wins in a row (the ALAH Knights had not lost a game since April 24), the team was now set to play for 3rd place at 1:30 in the afternoon.