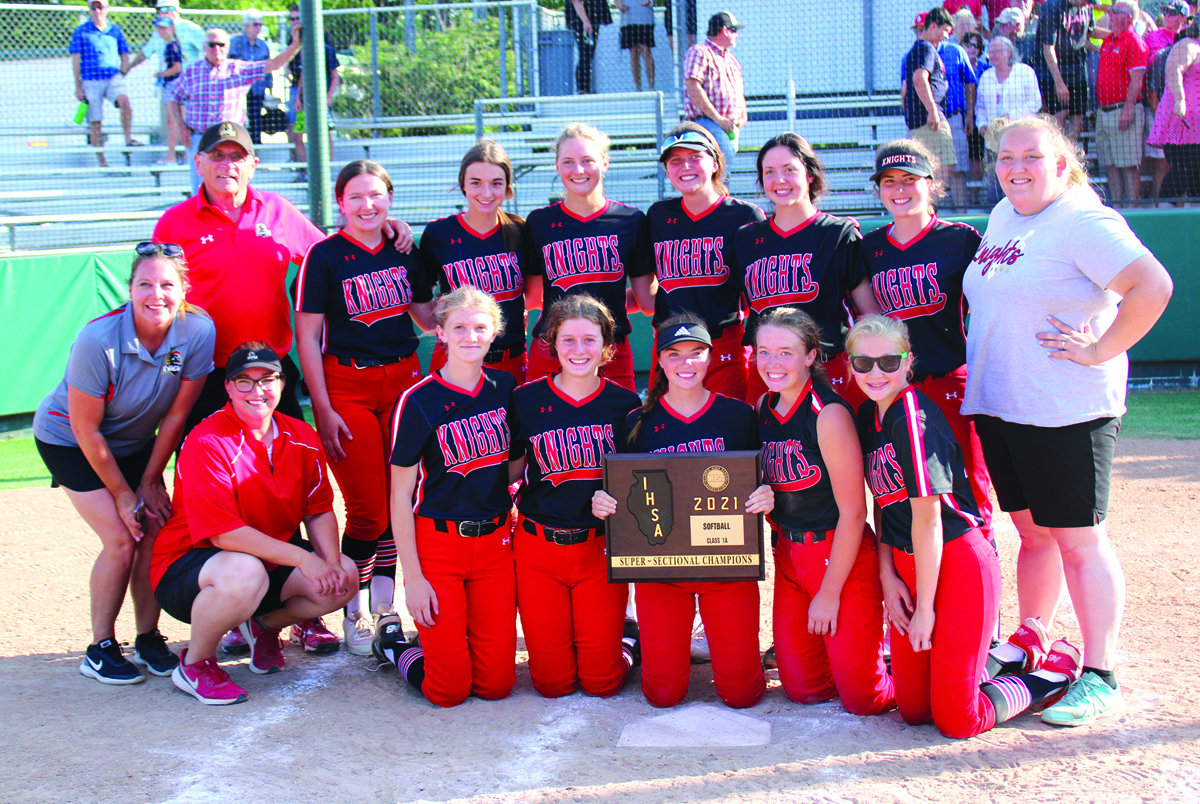 On Monday, June 14, for the first time in program history, the ALAH Knights advanced to the state tournament after a 1-0 win over Ottawa Marquette. The game was played on Inspiration Field on the Illinois Wesleyan campus in Bloomington where a large contingent of fans from the four communities gathered to cheer on their Knights.

Pitcher Makenzie Brown allowed no runs while striking out 13 in the game, giving up only 4 hits and no walks. She also went 2-for-3 at the plate to lead ALAH. Opposing pitcher for Marquette, Killelea, struck out 14 giving up 5 hits and surrendering one run. But that one run was all the Knights needed.

After striking out two in the top of the first inning, Brown reached first on a bunt but was not able to advance. In the second inning, second baseman Kaci Beachy reached first followed by three strikeouts from her teammates. In the third, left fielder Madison Schweighart was walked, catcher Charley Condill and Brown both singled. Schweighart then scored the only run of the game on a passed ball. The next batter struck out and Condill and Brown were left on base.

In the 4th, center fielder Ryli Kauffman walks but is left stranded on first when the next three Knights strike out. Fifth inning, shortstop Alisha Frederick gets a single after the first batter strikes out and Brown flies out. Kailee Otto flies out to end the inning.

The top of the 6th brought some excitement to the contest and the biggest threat yet to the Knights slim lead as the first batter for Marquette struck out and the second batter hit a single. Followed by another strikeout and another single putting base runners on first and second. A ground ball was then hit to shortstop Frederick who tagged the Marquette player out as she advanced to third for the final out of the top half of the inning. In the bottom of the 6th Beachy strikes out and Kauffman grounds out. First baseman Cheynne Chupp hits a single and advances to second base on a passed ball. But on the next play Mackenzi Bowles grounds out to the 2nd baseman.

The top of the 7th brought the last chance at bat for Ottawa Marquette. The first batter was hit by a pitch from Brown and took first base. The second batter struck out which led to the game ending on an exciting double play when a Marquette player bunted. Third baseman Otto came up to field the bunt and made the play to first which second baseman Beachy was covering. Beachy then threw the ball to pitcher Brown who had moved over to cover third. The Marquette player who had been on first made an attempt to advance to 3rd after tagging up at 2nd. Brown was able to field the ball and tag the runner. After a brief few seconds of celebration at the win however, the crowd suddenly fell silent as all realized that Makenzie Brown was on the ground in pain. In her attempt to make third the opposing player had ‘cleated’ Brown on the top of her foot. Although painful, thankfully the girls do not wear spikes. After a few minutes of concern for all involved, fans, players and coaches, ‘Brownie’ was able to get up, limp off the field and shake it off. All breathed a sigh of relief and the celebration resumed. Brownie was heard to remark after the play which happened very fast, “I just knew I had to be somewhere, doing something.” Good athletic instincts win out every time and thankfully, no one was badly hurt.

The result? A first time ever supersectional win for Arthur Lovington Atwood Hammond softball that advanced the Knights to the state class 1A tournament two days later in Peoria.