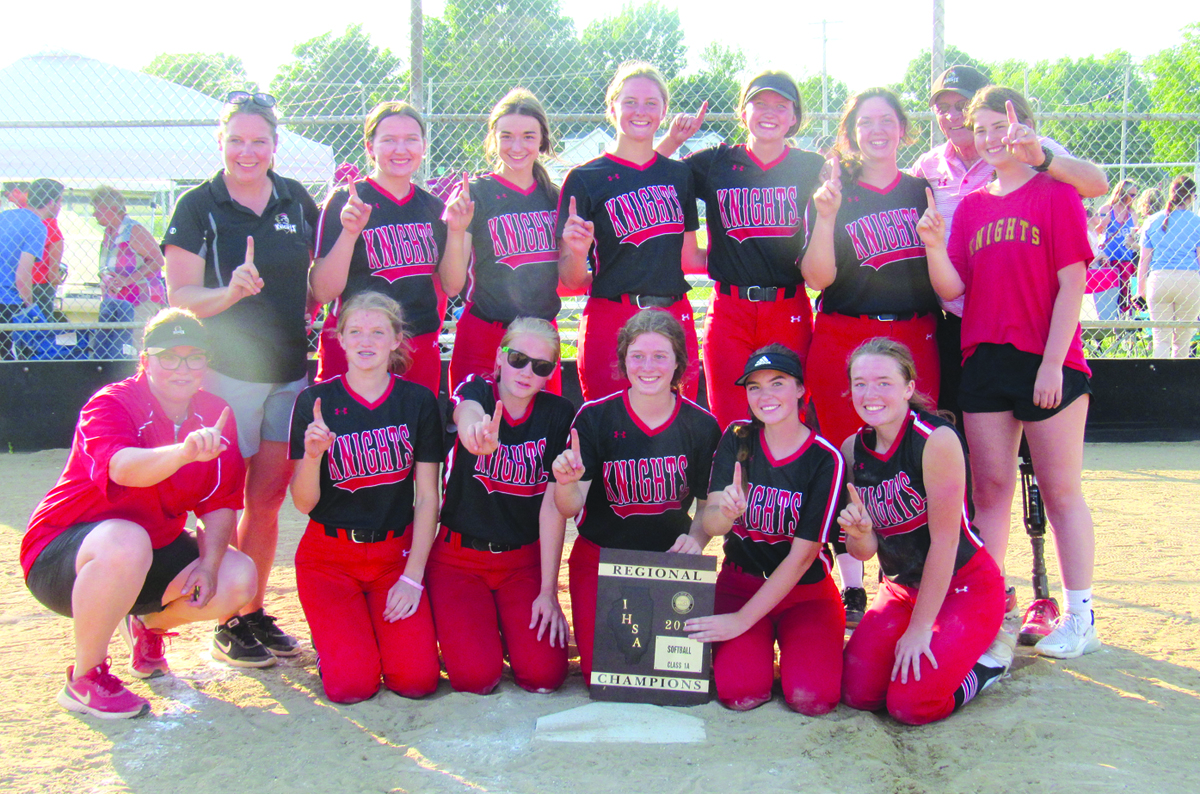 In the regional championship game on Friday at home, Makenzie Brown didn’t allow a single run as the Knights defeated Salt Fork 9-0 to clinch the title. Brown allowed just two hits in the contest.

ALAH secured the victory thanks to five runs in the third inning. The offensive firepower was led by Alisha Frederick, Kailee Otto, Kaci Beachy, Cheyenne Chupp, and Mackenzi Bowles, who each had rbi’s in the inning.

Brown pitched the Knights to victory lasting seven innings, allowing two hits and zero runs while striking out 18 and walking one.

Arthur Lovington Atwood Hammond totaled 14 hits as Brown, Beachy, Otto, Bowles, Frederick, and Chupp each collected multiple hits. Chupp, Frederick, Bowles, Otto, Beachy, and Brown all had two hits to lead the team. They also tore up the base paths as three players stole at least two bases with Brown leading the way with two.

In the semi-final game at home on Thursday, Makenzie Brown threw a shutout as the Knights defeated St. Thomas More to advance to the regional championship game on Friday.

Brown earned the victory in the circle allowing zero runs and besting St. Thomas More by a score of 15-0

ALAH got things moving in the first inning, when Otto singled on the first pitch of the at bat, scoring one run and put up seven runs in the fourth inning. Otto, Cheyenne Chupp, Mackenzi Bowles, Brown, Alisha Frederick, and Otto powered the big inning with rbi’s.

Brown was credited with the victory going four innings, allowing zero runs on one hit, striking out 12 and walking zero.

Record took the loss for St. Thomas More. The bulldog allowed 13 hits and 15 runs over three and two-thirds innings, striking out three.

The Knights racked up 13 hits in the game as Otto, Charley Condill, and Chupp all managed multiple hits led by Otto with four hits in four at bats.

Hosting Heritage on Tuesday in the final LPC conference game of the season, Makenzie Brown threw a gem to lead Arthur Lovington Atwood Hammond past Heritage 15-0 with the rarest of baseball moments, “The Perfect Game.”

The Knights opened up the scoring in the first inning, when Alisha Frederick doubled on a 1-1 count, scoring one run. Totaling 13 hits in the game, Frederick, Kaci Beachy, Kailee Otto, and Charley Condill each collected multiple hits as Frederick led the team with three hits in three at bats. Two Knights players smacked two home runs on the day when Frederick had a dinger in the third inning and Condill went deep in the fourth inning.

Adena Paul took the loss for Heritage. Destanee Morgan started the game for Heritage lasting one inning, allowing four hits and six runs while striking out one.

The Knights were crowned the 2021 Lincoln Prairie Conference Champions with the win and have shut-out every opponent in their last six games.

They advanced to the Sectional semifinal game on Tuesday at home.