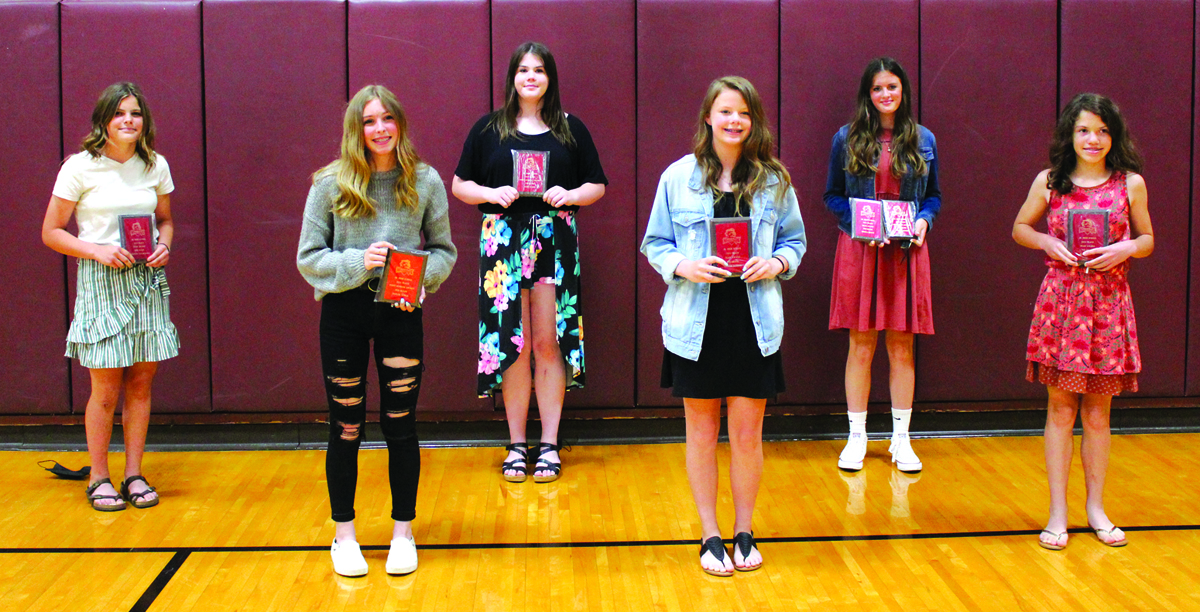 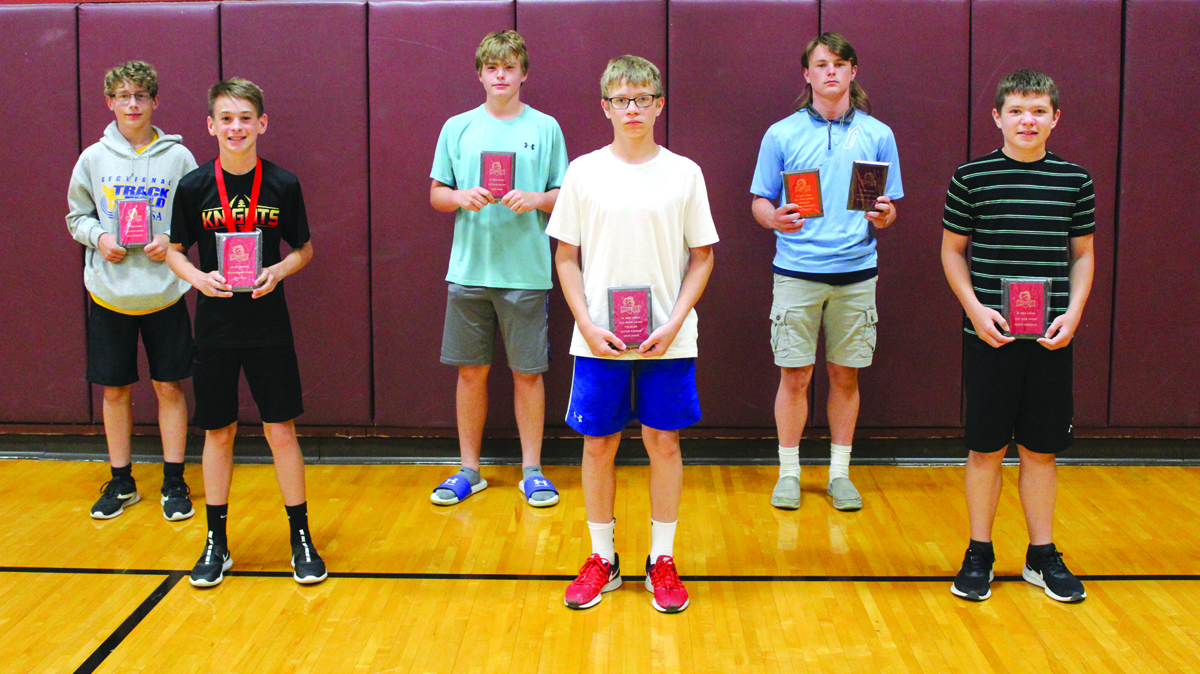 Head Boys Jr. High Track Coach Don McCarthy led off the program with thank yous to parents, administration, Athletic Director Nathan Seal, maintenance crew, teachers and meet helpers. He gave special thanks to Assistant Coach Melissa Hopkins and Girls Coach Bryton Ragon for all their help this season. He thanked High School Coach Matt Thomas for his help getting things started while Coach McCarthy was coaching football when the jr. high track season began. Coach Thomas sent this message, “Let everyone know how much I wish I could be there but I have a HS meet. Please express how proud I am of how much they all progressed during this season and how much I cannot wait to see them again on the High School team.”

Coach McCarthy then spoke about his team and what a remarkable job they did adjusting to changes and added that track is both an individual and team sport and it is challenging and also most times their biggest competition is themselves.

Coach then introduced his 7th grade squad which includes both sixth and seventh graders, who coming into this year had no track experience but improved as the season went along and they gained experience along the way. The 7th grade team was 8-4 in triangular, quadrangular and pentangular meets and in the larger multi-team meets took 3rd at Mt. Zion, 2nd in the Jr. High Okaw Conference meet, and 6th at Sectional. Also at Sectional, Payton Warrior would have qualified for the State Meet but it was not held this year.

The eighth grade team had four out of nine athletes that had any experience in track, having participated as sixth graders in 2019. The nine athletes on the team this year managed to go 6-7 in smaller meets and placed 5th at all the large meets, Mt. Zion, Jr. High Okaw Conference and Sectional. Like the seventh grade, one athlete, Dalton Vanausdoll would have qualified for State if there had been a meet.

Coach McCarthy then gave out his Special Awards. The Points Award goes to the athlete in each grade that scores the most points during the season. Coye Grant won the award for the sixth grade, Payton Warrior for the seventh grade and Dalton Vanausdoll, for eighth grade. The Team Award is given to the athlete that is unselfish, has a good work ethic, is coachable, sets a positive example and is consistent. Easton Frederick, Colin Smith and Alex Rexroad were the winners of this award. A new award for the boys this year was the Leadership Award, given to the athletes that led by example and also verbally and helped their teammates become better. Cruz Hale and Dalton Vanausdoll were the recipients of this award.

Coach Bryton Ragon then began the girls’ portion of the program. He spoke about taking the job just one week before the season started. He thanked Coach Hopkins for giving him the push to take the position. He also talked about what an unorthodox season it was and the fact that none of his 6th/7th graders had any experience whatsoever at track and how small his eighth grade team was due to having basketball going on for most of the track season. Coach Ragon said he had never coached girls before but it was a phenomenal year and that just like being an educator the best part is seeing just how far they come from the beginning of the season to the end. He said he was thankful for the opportunity to work with the team this year.

Coach Ragon then introduced his seventh grade team who won the Jr. High Okaw Conference meet, finished second at Sectional and were fourth at Mt. Zion. He also had an athlete, Alex Clark, who would have qualified for State.

The eighth grade team was recognized next. There were just eight girls but they were second at the Jr. High Okaw Conference meet and fifth at Sectional. Alayna Plank and Skyler Vorck would both have qualified for State. The eighth grade team members were: Sierra Binion, Lilian Edwards, Perla Juarez-Cuevas, Kaylee McDaniel, Kat Perez, Alayna Plank, Amelia Shonkwiler and Skyler Vorck.

Coach Ragon then handed out his Special Awards. His Points Award winners were: sixth grade, Leighton Poulos; seventh grade, Alex Clark and eighth grade, Skyler Vorck. He listed these qualities for his Team Awards – excel at practice and meets, work hard and have a drive to be better. Team Awards went to Maleyna Vanausdoll, Gracie Romine, Ruby Burton, and Sierra Binion. His Leadership Awards were presented to Addi Rohr and Sierra Binion for their outspokenness and ability to push others to be better.

The Jr. High track teams would like to thank everyone for their support throughout the 2021 season.