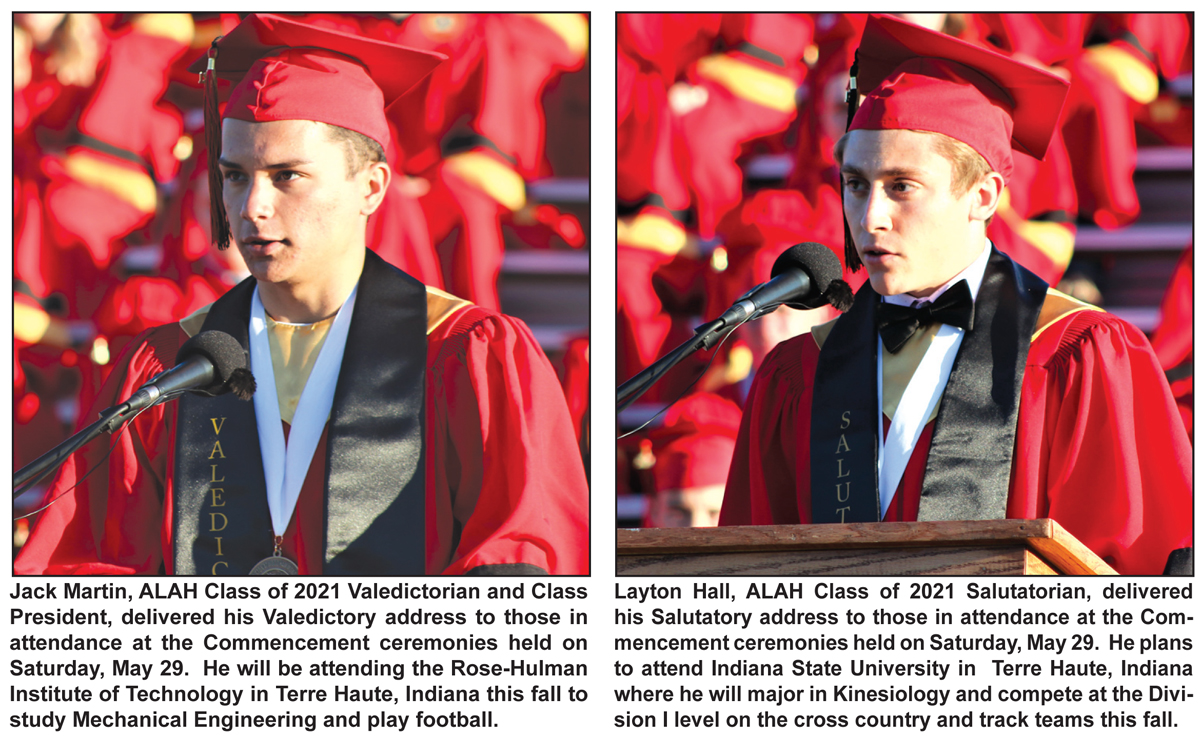 “I believe the world is missing something big….You, the Class of 2021 are greater than a global pandemic. You are greater than these circumstances. These last months do not define who you are or your future,” Arthur Lovington Atwood Hammond High School Principal Steffanie

Seegmiller stated as she addressed 71 seniors seated behind her at graduation ceremonies Saturday evening, May 29, on the ALAH football field.

“You have spent approximately 2,115 days in school NOT under the umbrella of a global pandemic. Only nine percent of your career was spent even thinking about the coronavirus. And even when you were in school with COVID rules, it didn’t stop you as you’ve earned the highest SAT scores in the school’s history, you completed 167 college courses and 562 college credit hours with 75% of this being earned during a pandemic,” Seegmiller said.

“You committed to colleges and the military, you signed athletic agreements, you played your instruments, you kept moving forward, dreaming big and making plans. A global pandemic did not stop you. The world needs you to lead us because you know how!”

Superintendent Shannon Cheek speaking at the commencement ceremony held outside on Wilson Field said, “I get to speak with confidence and certainty about two characteristics that define the Class of 2021 for me and that is leadership and perseverance. I was privileged to watch the

Layton Hall, salutatorian, applied the wise words of Olympic runner Steve Prefontaine to every aspect of his life whether through his running career or schoolwork: “To give anything less than your best is to sacrifice the gift.”

Sports as well as any extracurricular activities, influence who we are as people, and they teach us teamwork. Having witnessed many outstanding signs of teamwork throughout his life so far, Hall referenced fellow classmate Ben Carroll as having learned the real meaning of a true teammate following Carroll’s injury that ended his high school athletic career.

He concluded by saying, “The Class of 2021 is headed off in different directions: continuing our education, serving our country, and entering the workforce. Even though we may have had to sacrifice some our junior and senior years, we followed Prefontaine’s motto and always gave our best.”

Valedictorian and Class President Jack Martin quoting the Class of 2021’s motto from Vince Lombardi: “Perfection is not attainable, but if we chase perfection, we can catch excellence.” Martin stated, “Perfection would not be the word to describe the last 15 or so months. We are leaving this high school after an entire year fully masked and fully distanced, but we must be fully confident moving forward.”

He continued that each and every person receiving their diplomas tonight had their own unique battles they had to overcome as we entered the most uniquely challenging period of our young lives.

Thanking every teacher from pre-kindergarten up Martin said, “The sacrifices and efforts you have made on a daily basis have allowed each of us to develop as young adults entering the world.”

A special recognition for faculty member Dale Shuring, who has been a fixture at District #305 for more than three decades, congratulating him on his well-deserved retirement was read by Principal Seegmiller. She noted some of his accolades that included coaching five different sports, earned five IHSA Sweet 16 appearances, four Class 1A championships, named coach of the year four different times, inducted into the Illinois Basketball Coaches Hall of Fame, taught seven different math classes, and by her estimates over 3,000 students and athletes were influenced by him.

Before turning the class over to district superintendent Shannon Cheek for the presentation of diplomas, Principal Seegmiller announced the recipients of the Timm Trust Awards.

Principal Seegmiller added that the seniors collectively earned almost $950,000 to further their education and $166,000 comes from local families and organizations. She thanked them for their faith in this generation and in their dreams.

After enduring several months of uncertainty during their last part of high school, graduation evening ended with perfection. Mother Nature cooperated to the fullest and the sky lit up with fireworks making this an ending and beginning to a bright and sparkling future.