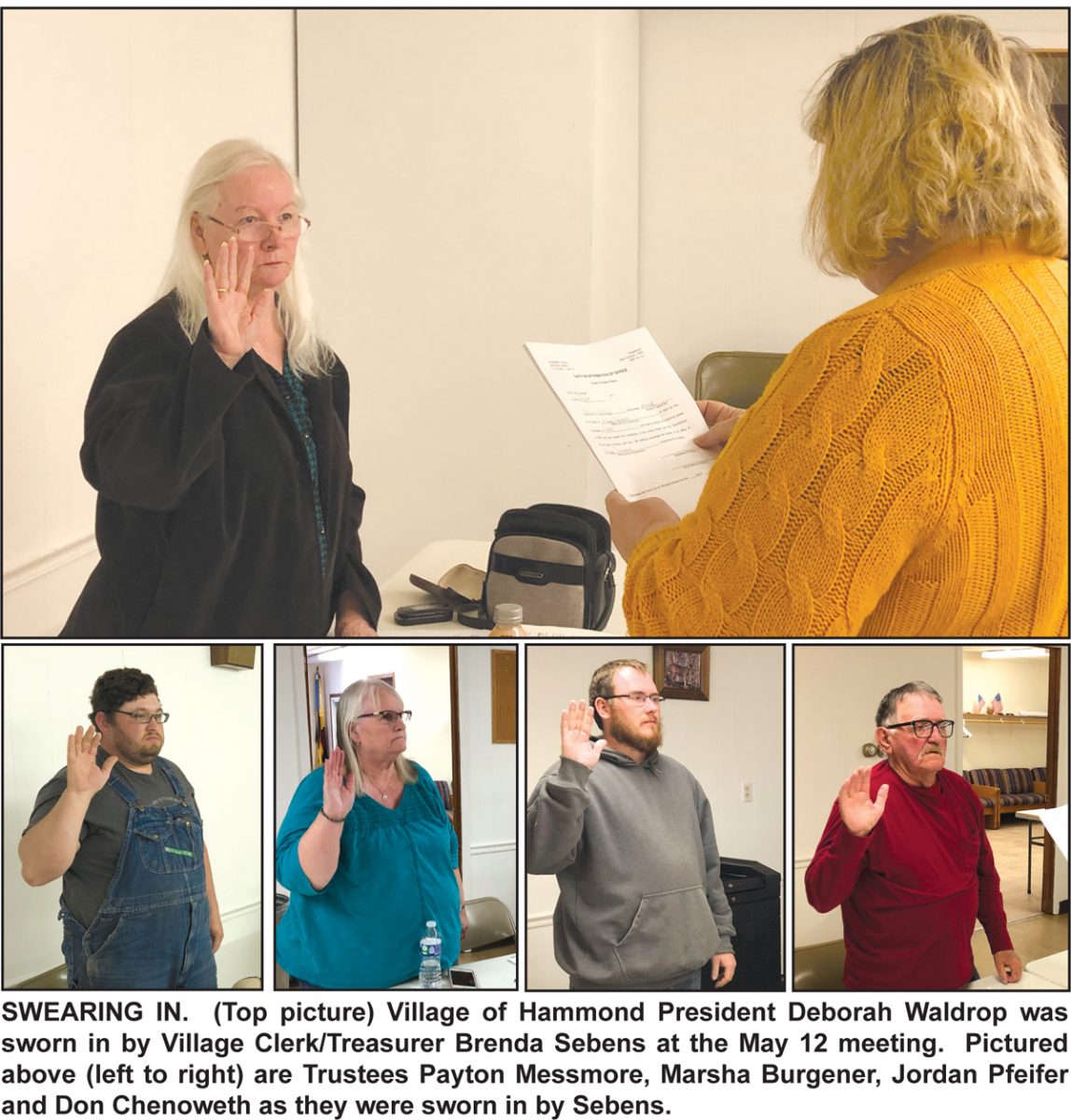 Debby Waldrop retained her position of President for the Village of Hammond at their regular meeting on Wednesday, May 12. Waldrop was sworn in by Village Clerk Brenda Sebens. Other board members sworn in by Sebens were Marsha Burgener, Payton Messmore, Jordan Pfeifer and Donnie Chenoweth. Chenoweth was appointed by the board to fill the vacancy of the late Mike Brown.

The board has been working on a big project to improve the water system for Hammond. Approximately 3-4 years ago the village began work on applying for a loan and grants to help with this project. They were approved by USDA in December, 2020. The total cost of the project was $970,000. The loan the board received was for $400,000 and they received a total of $570,000 in grant money. The project started in March and is to be completed in August.

A & R Contractors of Champaign are doing the work and the board was told they are on schedule. The payment to A & R will be $662,340. This payment comes from the loan & grant money. However, Stan Fearday with the Upchurch Group, Inc. was in attendance to explain to the board they have found out a new detention tank is needed.

This came as a surprise to the board and a little overwhelming when they learned the cost of a smaller scale detention tank (to be used for only 2 weeks) would be $23,000 which includes a concrete pad. A & R said they would remove the concrete pad. If it takes more than 2 weeks, it would be $1,500 per week. This was not included in the budget.

Since Public Works Superintendent Ron Miller was unable to attend this meeting, the board decided to table this decision and have a called meeting on Tuesday, May 18. The purpose of this meeting was to have discussion and action regarding the current financial status of the water project and the use of a temporary detention tank.

Additional business before the board included:

The dark areas in town where street lights have gone out have been replaced with LED bulbs by Ameren. The board voted to purchase three new street lights for A street at a cost of $5-$7 per light added to the electric bill per month.

The board decided it was not feasible at this time to purchase cameras for the village.

The board approved the purchase of a used golf cart for village use.

Ron Miller was in attendance at this special meeting and explained to the board the importance of a new detention tank and how it is beneficial to the Village of Hammond. No vote was necessary since the payment will be coming from the Contingency Fund.

Miller told the board the village should keep the concrete pad.

The next meeting of the Hammond Village Board will be Wednesday, June 9, at 7 p.m.