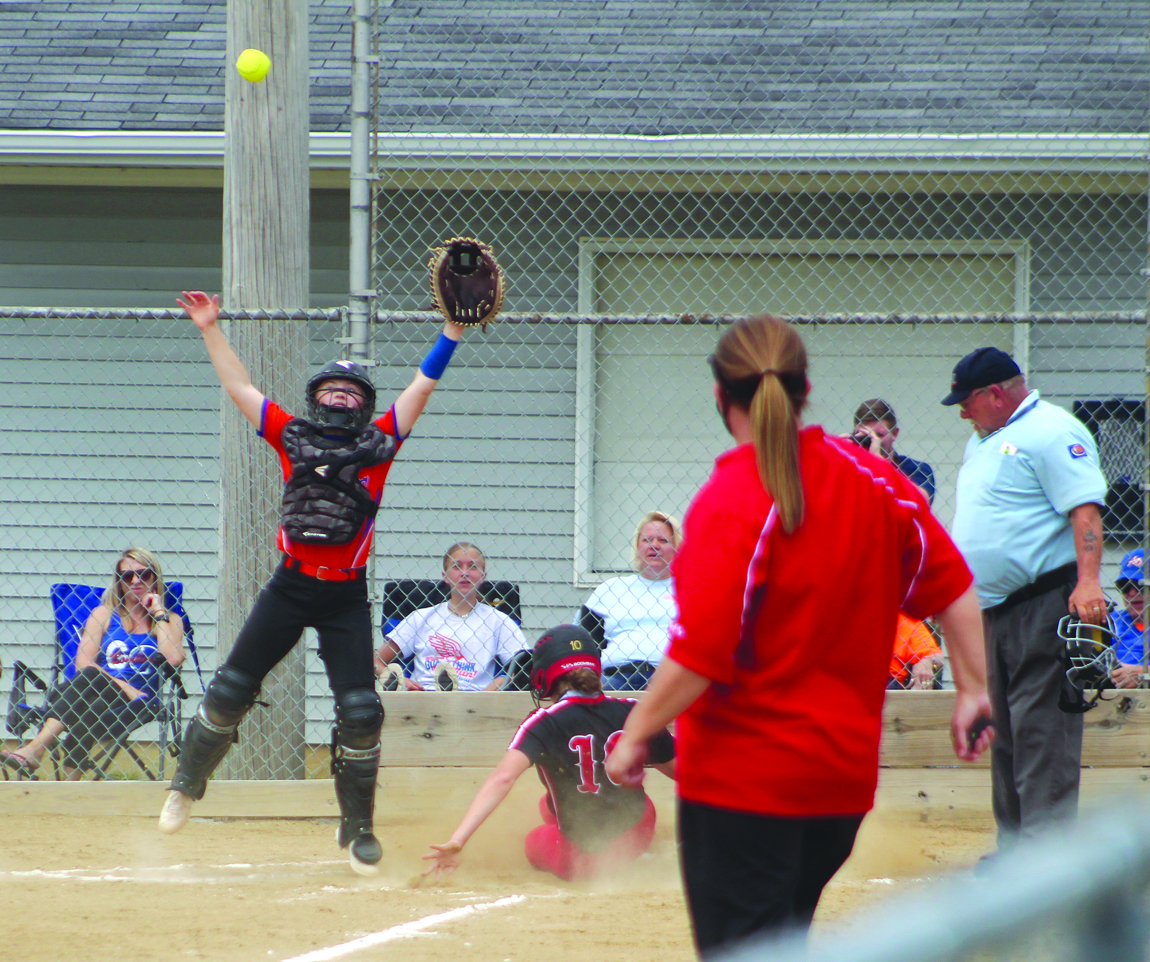 Mackenzie Brown slides into home safely while the Argenta Oreana player watches the throw sail over her head. Mackenzie scored the first of three runs to be scored in the fifth inning that doubled the Knights’ lead to 6-0 which would be the final score. Mackenzie pitched another stellar game and the team is now 15-3 on the season and undefeated in the Lincoln Prairie Conference.

Makenzie Brown shut down Argenta-Oreana, throwing a complete game shutout and lead the Knights to a 6-0 victory at home on Saturday. In the second inning, ALAH got their offense started when an error scored one run and tallied three more runs in the fifth inning. Alisha Frederick, Kailee Otto, and Cheyenne Chupp powered the big inning with RBIs.

Brown got the win surrendering zero runs on two hits over seven innings, striking out 15 and walking zero.

Arthur Lovington Atwood Hammond totaled nine hits in the game with Brown and Frederick each collecting three hits to lead the team. Brown also added two stolen bases as the Knights ran wild on the base paths with seven stolen bases.

Newbanks took the loss for the Bombers allowing nine hits and six runs over six innings, striking out 11 and walking one.

Traveling to Mt. Zion on Friday night, the Knights were victorious as Makenzie Brown shut down the Braves, throwing a complete game shutout in the 13-0 win.

Charley Condill collected four hits in four at bats with a single in the first four innings of the contest.

Alisha Frederick fired up the offense in the first inning when she doubled scoring one run.

Brown was the winning pitcher going five innings, allowing zero runs on one hit and striking out 12.

The Knights saw the ball well today, racking up 15 hits in the game. Condill, Ryli Kauffman, Frederick, Beachy, and Chupp all managed multiple hits led by Condill four hits in four at bats.

Bender went 1-for-3 at the plate to lead Mt. Zion in hits.

On the road Thursday to Tri-County, two Knights pitchers teamed up in a shutout victory over the Titans 28-0

They scattered 23 hits in the game with Frederick, Cheyenne Chupp, Charley Condill, Kaci Beachy, and Makenzie Brown all collecting multiple hits. Kailee Otto launched one home run on the day as she went for the long ball in the first inning.

Madison Schweighart led Arthur Lovington Atwood Hammond to victory in the pitcher’s circle. The righthander allowed one hit and zero runs over three innings, striking out two and walking zero. Ryli Kauffman threw one inning in relief out of the bullpen striking out Lindsay to finish off the game.

Pollock took the loss for the Titans as the hurler surrendered 17 runs on 18 hits over three innings, striking out four. Brandenburg started the game for Tri-County allowing five hits and 11 runs over one inning.