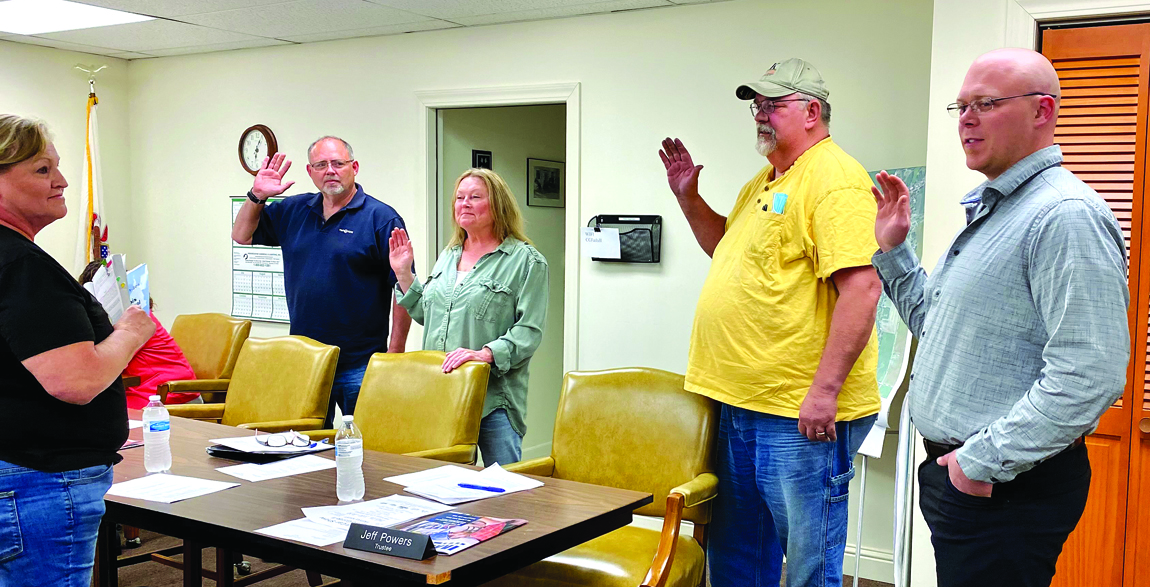 Powers has served on the board for many years, and this will be Frydenger’s second term after being appointed, and Hyde and Snoke’s first. The board approved the motion to approve Jim Henderson as the temporary board President for the next two years as no Mayor was elected.

Linda Ash said her goodbyes to the board, “It has been nice everybody, my part is done.”

The water project will begin soon. The fiber company and the water project have some conflicting areas. The fiber optics company has also caused two gas leaks in the past month. Both were resolved quickly by the CGFD and Ameren. Engineer Tom Overmyer stated, “Waiting for Birdich to give us the start.” Mark Blickensderfer added, “It will work out better if the fiber contractors are gone so we’re not working at the same spot…”

The board approved The Depot having outdoor events on June 24, July 16, July 31, and August 15. However, until the liquor application is in, the events are not approved for outdoor liquor. There was much discussion about this. Amanda Rickner was present for The Depot. Rickner is concerned about bike night, “it is nearly impossible to ask bikers to not bring your alcohol outside.” However, unless the board holds a special meeting to grant her a liquor license the event will not allow outdoor liquor.

Rickner stated, “i will do my very best to not bring alcohol outside, but I am one person and Mark is one person and they don’t give two craps about what we say.” To which Snokes replied, “Yeah, but it is still your responsibility.”

Rickner inquired whether the ordinance regarding special event liquor licenses could be changed. Last year, because of COVID some outdoor events with liquor were approved simply because the State was not handing out licenses. Board members told Rickner they can be changed, but as of now she needs to follow the ordinance and get in her paperwork for the special event license for approval.

The board approved Casey and the American Legion #117 liquor licenses.

The board approved the annual budget. Village Clerk Tina McCarty stated about the water project and other needs for the village, “We are actually offset, because we did hold tight in 2020, we can actually spend a little bit.” Adding, “What we spent in 2020 we are kinda making up for in 2021.”

She added the State is decreasing the budget by 2 percent for municipalities.