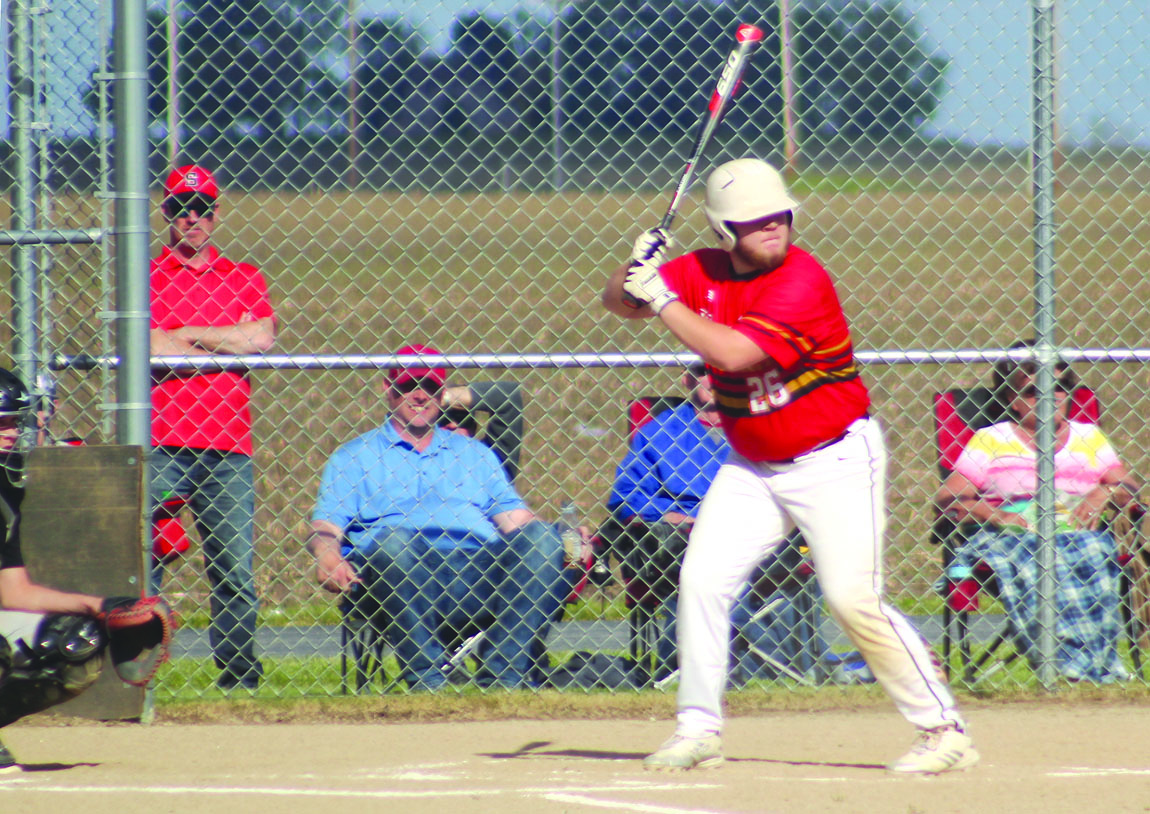 Knights’ third baseman, Kody Kornewald bats in the game against Sullivan on May 13. The Knights rallied with a big 11 run inning to take the lead 12-5 after Sullivan led 5-1. The Knights would go on to win the game 14-10 in an exciting back and forth battle.

Another busy week for the ALAH baseball team with four games on the schedule.

On Saturday they traveled to Shelbyville and the Knights watched the game slip away early and just could not recover in an 11-0 loss to the Rams.

Shelbyville scored on a single by Beals, a single by Trimble, and a walk by Koonce in the first inning.

The Knights struggled to put runs on the board and had a tough time defensively containing Shelbyville, giving up 11 runs.

Shelbyville got things started in the first inning when Beals singled on a 0-1 count, scoring one run.

One bright spot for ALAH was a single by Quentin Day in the first inning.

Day took the loss for the Knights as the righty allowed 11 hits and 11 runs over two and a third innings.

Day, Wyatt Hilligoss, Logan Brough, and Nik Miller all had one hit to lead Arthur Lovington Atwood Hammond. ALAH had no errors in the field as Miller had the most chances in the field with two.

Brachbill was credited with the victory for Shelbyville. The pitcher allowed four hits and zero runs over three innings, striking out three and walking zero. Clark threw two innings in relief out of the bullpen.

Shelbyville scattered 13 hits in the game and committed no errors.

Traveling to Bethany on Friday afternoon against Okaw Valley, it was a heartbreaker for ALAH as they lost the lead late in a 5-7 defeat.

The Knights fired up the offense in the first inning, when Nik Miller singled on a 0-1 count, scoring one run.

In the bottom of the fourth inning, Okaw Valley tied things up at four and took the lead when Nichols singled on a 1-0 count, scoring one run.

The Knights trailed by one with the Timberwolves batting in the bottom of the fifth when Forlines drew a walk, scoring one run and pushed the lead to two runs at the end of the game.

ALAH collected nine hits in the game. Miller, Wyatt Hilligoss, and Clay Seal all had multiple hits as Hilligoss and Miller each had three hits to lead the team.

Nichols started the game for Okaw Valley as the ace allowed two hits and three runs over one inning. Doris got the win for going five innings, allowing two runs on six hits, and striking out four. Hagerman threw one inning in relief out of the bullpen.

The Timberwolves tallied 11 hits in the game. Hagerman and Miller each managed multiple hits for Okaw Valley as Hagerman led the team with four hits in four at bats.

Hosting the Sullivan Redskins on Thursday on a picture-perfect spring day, the Knights were victorious as Logan Brough lit up the bat.

Both pitching staffs had their hands full, frequently dealing with runners on base. The Knights collected 13 hits and Sullivan had ten.

Sullivan got things started in the first inning when Clay Seal induced Foster to hit into a fielder’s choice, but one run scored.

Sullivan scored three runs in the third inning driven by a walk by Foster and an error on a ball put in play by Eller.

Braden Kauffman was credited with the victory for Arthur Lovington Atwood Hammond and the righthander went three and a third innings, allowing four runs on eight hits and striking out two. Seal started the game for the Knights allowing two hits and five runs over three and two-thirds innings, striking out three.

ALAH tallied 13 hits in the game. Brough, Miller, and Hilligoss each managed multiple hits as Brough led the Knights with four hits in four at bats.

Eller took the loss for Sullivan allowing six hits and seven runs walking one. Stewart started the game for Sullivan and the bulldog allowed four hits and five runs over three and two-thirds innings, striking out seven.

Sullivan had a total of ten hits. Eller and Ruppert all had multiple hits for Sullivan with Eller going 3-for-3 at the plate to lead Sullivan in hits. Sullivan was perfect in the field not committing a single error.

The Arcola Purple Riders traveled to Lovington on Tuesday as pitching by Wyatt Hilligoss led the Knights to victory in the shut-out.

Hilligoss did not allow a single run and allowed just two hits in the game as Arthur Lovington Atwood Hammond defeated Arcola 10-0.

In the first inning, ALAH got their offense started as Logan Brough drove in one when he doubled.

In all, the Knights totaled eight hits in the game with Brough and Hilligoss each racking up two hits to lead the team.

Hilligoss earned the victory on the mound for ALAH with the righty lasting five innings, allowing two hits and zero runs while striking out 13.

Truex went 2-for-2 at the plate to lead Arcola in hits.