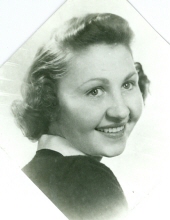 A service to celebrate Hazel’s life will be held at 11:00 a.m., Monday, May 24, 2021 in Dawson & Wikoff Funeral Home, Mt. Zion. The family will receive friends beginning at 10:00 A.M. until service time at the funeral home. Burial will be in North Fork Cemetery. Memorials may be made in her memory to St. Jude Children’s Research Hospital. Messages of condolence may be sent to the family at dawson-wikoff.com.

Hazel was born January 4, 1921, in Moweaqua, IL the daughter of Roy and Maude (Shride) Giles. She often referred to being born “Country” and remained “Country” throughout her life. Hazel grew up on a farm before electricity. She had a love for animals, riding horses throughout her life, and never really lived without an animal companion. Hazel married Everett “Blaine” Sunderland on October 16, 1949. He preceded her in death on March 15, 1997. Hazel owned and operated Gwyaine Kennels of Decatur until 1982, retiring to Northern Wisconsin.

She was the recipient of an award from the American Kennel Club (AKC) for her understanding and compassion for animals. She enjoyed people – always willing to give a helping hand and had compassion for “the underdog.” At age 69, she volunteered as a teaching assistant for Northern Lights Christian Academy, until the age of 75. She had worked in the PTA (Parent Teachers Association) and received lifetime membership in the National PTA and had served many roles in the Blue Mound/Boody School District, completing her service as President of the Macon County PTA.

During WWII, she had worked for North American Aviation and assisted in building P51 Mustang Fighter planes. Hazel had a motto of wanting the job done right, the first time. She was proud of her country and proud to be an American. Hazel could also, be described as a compassionate person, who loved nature, loved animals, and all of God’s creatures.

Hazel was preceded in death by her parents, husband, two brothers, and one sister.

Hazel shared that she “didn’t walk with God every day, but, God walked with her every day!