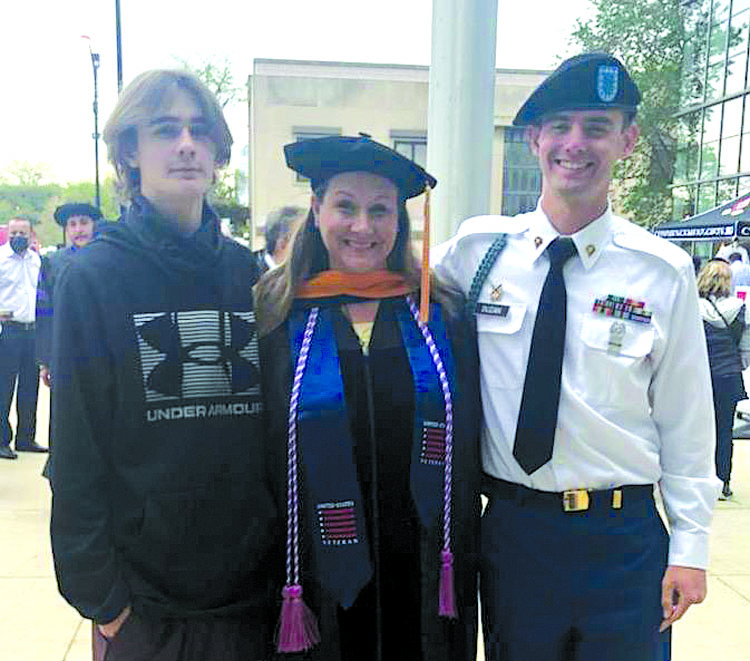 Tosha Binion Donnals who was born and raised in Arthur and graduated from Arthur High School in 1992 is one of our community’s most recent graduates. In fact she has graduated from the University of Illinois Chicago with her Doctor of Nursing Practice, specializing as a Family Nurse Practitioner. But before that Tosha served in the Illinois National Guard for 24 years retiring in 2016.

A recent article in the UIC newsletter ‘Chicago Today’ noted that “she always knew she wanted to further her education but it wasn’t until after her son got sick that she decided to pursue nursing.” Many of you may remember just over ten years ago when we learned that Max, who was then 4, had been diagnosed with acute myeloid leukemia. Thankfully, Max is now 15 and fully recovered. But it was during those 6 months that Tosha and Max spent at St. Jude in Memphis where the nurses she met inspired her and she realized that, and I quote, “I fell in love with the kids and the atmosphere at the hospital. I had to take care of him, and I thought, ‘I could do this,’ so I went to nursing school.

In 2013, another obstacle was thrown Tosha’s way when she was diagnosed with breast cancer during her second semester of Nursing school. She says, “Ironically, we were studying cancers the week I found my lump and I just knew when I found it that it wasn’t good.” Fortunately for Tosha she also made a full recovery. One of those who helped her on that journey was Dr. Cheryl Hilgenberg, Arthur resident, who was her professor and clinical mentor in one of her classes that semester. “Talk about having the right person there for me!” was what Tosha had to say about the support Cheryl provided.

Tosha received her Bachelors of Science in Nursing from Millikin University in Decatur in 2015 and became an ICU nurse at Decatur Memorial Hospital. In the article she stated that ““Once I got into working in an ICU, and I saw the effects of chronic conditions, I wanted to go into primary care,” she said. “Being from a small town, and having been there most of my life, one thing I know is we need more health care providers and so I decided to go into family practice.”

The article in UIC Today was excellent and in telling Tosha’s story I am going to quote extensively from it as follows: “Donnals selected UIC’s Doctor of Nursing practice program because of its focus on community health and diversity, as well as it being a nationally ranked school, close to home. “It has a really good reputation and I wanted to get the best education for my time and money. It’s held up to its reputation,” she said.

The opportunity to experience clinicals at a federally qualified health center (FQHC) was important to her as well. She wasn’t familiar with the communities that FQHC serves outside of book learning, and she really wanted to get that experience. The COVID-19 pandemic delayed her clinical placement, but she finally got placed in an FQHC.

“I love it. It’s been the highlight of the program, learning about this health care model, and interacting with the patients, it’s been a blessing for me,” she said.

For her DNP project, Donnals chose to focus on quality improvement, developing a program to educate nurses on how to deliver smoking cessation information to patients with chronic obstructive pulmonary disease, COPD. COPD has been on her target list because her grandmother died from the disease.

“When I was working with COPD patients, I realized nurses didn’t have a standard way to educate patients about smoking cessation. I came up with a program to teach them (RNs) how to talk to patients and to improve their knowledge on smoking cessation. It’s always been something I wanted to do,” Donnals said.

Even with her COPD project practicum hours, she still needed to do more DNP project hours. So, she decided to try out for a spot on the UIC’s Clarion Case Competition Team — an interprofessional case competition in which teams must develop a strategy to address complex health care issues. Donnals, along with three other individuals, represented UIC at the national-level competition on April 10. Even though the UIC Clarion Team did not make the top three teams this year, the knowledge and experience Donnals gained were invaluable, she said.

She also received the UIC Cardew-Mullane Award in Clinical Excellence and Leadership, which recognizes outstanding clinical skills and leadership abilities in graduating students.

While in the DNP program, she remained employed as a nurse, earned her sleep health certificate and raised her two sons.

“I don’t know what I’ll do when I only have one job,” she joked.

After graduation, she hopes to work in primary care, serving patients across the lifespan, possibly at a federally qualified health center in a small town.”

Tosha also has a son Ty who is serving our country in the Illinois Army National Guard. He is attending Lakeland College in Mattoon, majoring in psychology after returning home in December from a deployment to Jordan. Tosha is the daughter of Debbie Binion Howell and has three brothers, Brandon Artis and Hank and Nathan Schrock. All three brothers have also served in the military and we thank all the family for their service to our country.

Tosha is the perfect example of how far perseverance and hard work can take you in life. Congratulations Dr. Donnals!

Hope you can use the pictures. The first is one that accompanied the article. Next is Max, Tosha, Ty; the second is Tosha’s mom, Debbie Binion Howell and Dr. Donnals