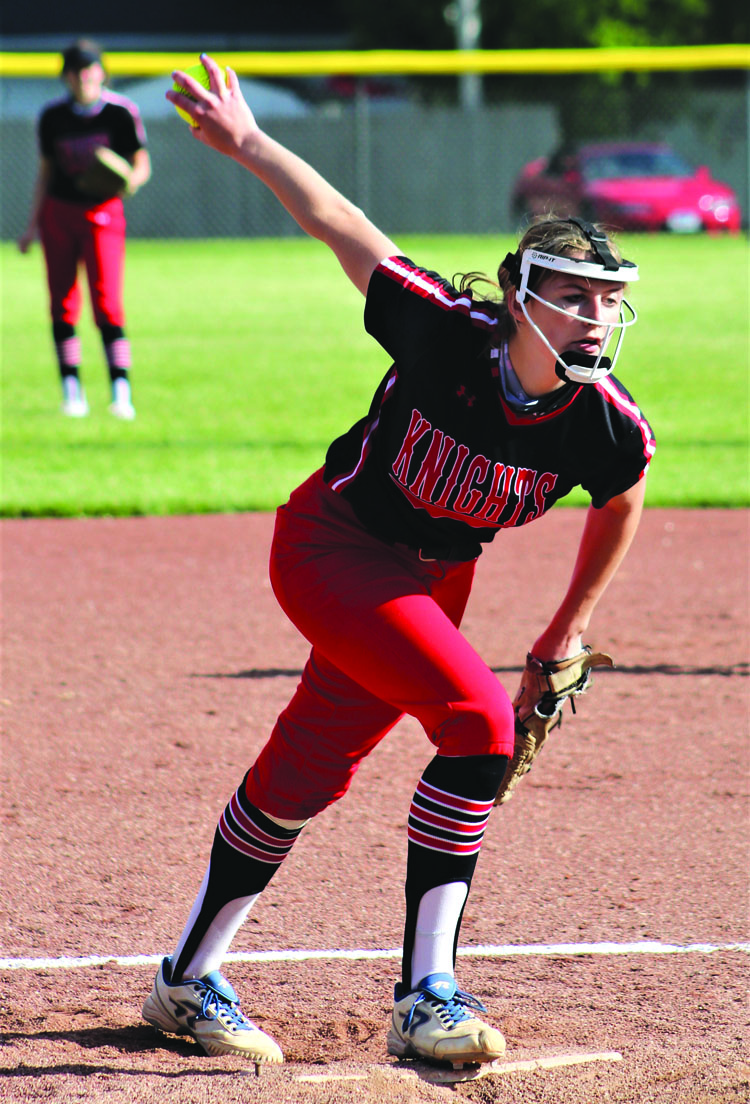 With beautiful spring weather and much calmer winds, the Arthur Lovington Atwood Hammond softball team picked up four more victories this past week as they were at home for two and on the road for two games.

On Saturday morning the Knights traveled to Villa Grove and came away with the victory 8-4, overcoming the Blue Devils late rally due to ALAH’s early four-run inning lead.

Knight Kailee Otto smacked a home run to center field in the third inning knocking Maddison Schweighart in as ALAH took the lead 2-0.

Arthur Lovington Atwood Hammond put up three runs in the seventh inning with the offensive onslaught coming from a single by Ryli Kauffman and a home run by Cheyenne Chupp.

Villa Grove scored four runs in the seventh inning on a triple by Reardon, a single by Cerdes, and a double by Batten-wove.

Makenzie Brown led the Knights to victory in the circle. She surrendered zero runs on one hit over six and two-thirds innings, striking out 17. Madison Schweighart threw one-third of an inning in relief out of the bullpen.

ALAH collected 13 hits on the day. Alisha Frederick, Ryli Kauffman, Charley Condill, Mackenzi Bowles, and Cheyenne Chupp all had multiple hits with Frederick leading the way as she had three hits in four at bats.

Block took the loss for Villa Grove as the hurler allowed 13 hits and eight runs over seven innings, striking out four.

Makenzie Brown threw a shutout on the road Friday night as ALAH was hosted by Okaw Valley.

Brown throwing a gem for the Knights, allowed zero runs and besting the Timberwolves by a score of 11-0

Arthur Lovington Atwood Hammond secured the victory thanks to nine runs in the fourth inning. Charley Condill, Kailee Otto, and Brown all moved runners across the plate in the inning.

Tallying nine runs in the fourth inning, the rally was led by home runs by Otto and Brown and an error on a ball put in play by Condill.

Brown was the winning pitcher for ALAH going five innings, allowing zero runs on one hit, striking out 13 and walking zero.

The Knights socked three home runs on the day as Brown put one out in the second and fourth innings and Otto went yard in the fourth inning.

Collecting seven hits in all on the day with Brown and Cheyenne Chupp each having multiple hits. Brown went 3-for-3 at the plate to lead ALAH in hits.

Bunfill took the loss for Okaw Valley. Bunfill allowed five hits and ten runs over four innings, striking out nine. She also led her team with one hit in two at bats.

The Sullivan Redskins traveled to Atwood on Thursday and came away with a loss as ALAH was victorious 6-1.

The Knights got things started in the second inning when an error scored one run and scored another four runs in the sixth inning. Kaci Beachy had a rbi groundout in the inning to lead the run scoring.

Makenzie Brown led ALAH to victory on the rubber, allowing zero hits and zero runs over six innings, striking out 11, and walking one. Madison Schweighart threw one inning in relief out of the bullpen.

The Knights totaled eight hits in the game coming from Brown, Ryli Kauffman, and Alisha Frederick with multiple hits. Frederick, Kauffman, and Brown each managed two hits to lead the team. Not a single error in the field was committed and Charley Condill had 13 chances in the field, the most on the team.

Probus took the loss for Sullivan as the hurler lasted six innings, allowing eight hits and six runs while striking out eight.

Madison Schweighart threw a gem at home on Tuesday to lead Arthur Lovington Atwood Hammond past Cerro Gordo 15-0 with the rarest of baseball moments: “The Perfect Game.” Schweighart induced a fly out from Throneburg to end the game in three innings.

Kailee Otto led the team to victory by driving in five runs. Otto went 3-for-3 at the plate. Otto drove in runs on a triple in the first, a double in the second, and a single in the third.

The Knights got on the board in the first inning when Otto tripled on the first pitch of the at bat, scoring one run.

Scoring seven runs in the third inning, Mackenzi Bowles, Schweighart, Otto, Alisha Frederick, Kaci Beachy, and Ryli Kauffman all moved runners across the plate with rbi’s in the inning.

Schweighart was credited with the victory as the right hander surrendered zero runs on zero hits over four innings, striking out six and walking zero.

ALAH tallied 14 hits in the game. Otto, Frederick, Kauffman, Charley Condill, and Schweighart all had multiple hits. Frederick and Otto each collected three hits to lead the team. Condill had the most chances in the field with six as the Knights had no errors in the field.

Throneburg took the loss for Cerro Gordo. The bulldog went three and a third innings, allowing 15 runs on 14 hits and walking zero.