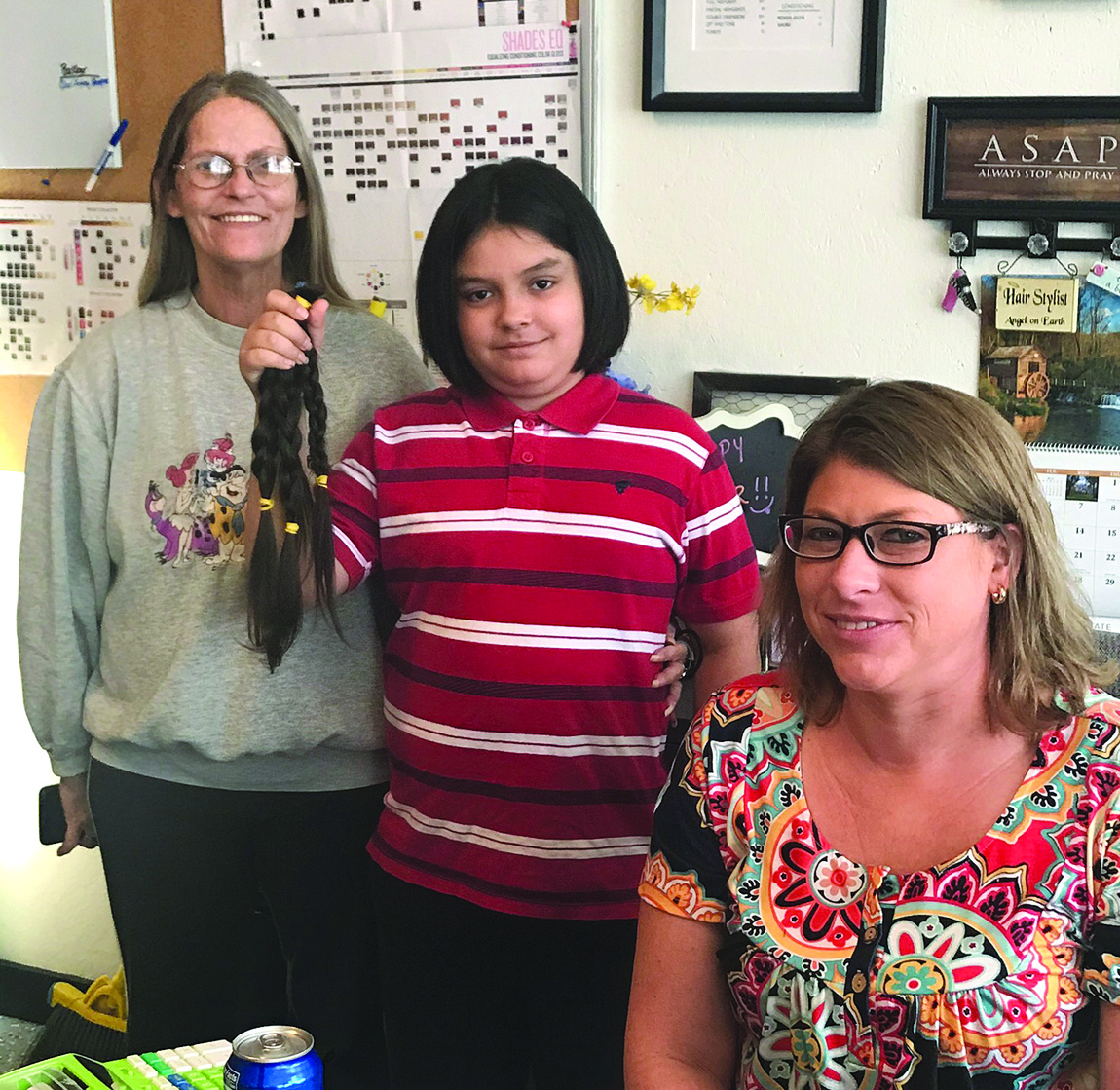 Kudos to Connie Hutchcraft for raising a caring & compassionate son, Jace Hutchcraft, for his wanting to donate his beautiful hair for Children with Hair Loss, and Aimee Logsdon-Nevitt for her expertise in carrying through with Jace’s request with cutting his hair.

Jace Hutchcraft of Atwood learned at an early age that getting haircuts was not included in his favorite things to do.

In fact, when he was five his mom was trimming his hair and accidentally nipped his ear with the scissors. She had told him he would have to sit still, but like many young kids, he must have been a little fidgety. That cinched his decision, no more haircuts. He wasn’t taking the chance with mom and the scissors.

With that decision, Jace’s choice was to let it grow. His hair is just beautiful. He did have to endure some teasing from kids who thought he looked like a girl. He was brave and ignored what they were saying, he was not going to get a haircut.

One of his classmates asked him if he was going to donate it. Jace went home to his mom and asked her what that meant. She explained to him about the sick children at St. Jude’s and their hair loss. Even though Jace was young, he was intrigued about continuing to grow his hair to donate it to help other children.

During the growing years, from age 5 to now 9, Jace took very good care of his hair. In the summer when it was hot, he would pull it back in a pony tail. But at no time did Jace think of changing his mind and cutting his hair.

The “big day” came on Saturday morning, April 10. This was the first time I met Jace. Aimee Logsdon-Nevitt, owner of His N Hers Cutz Hair Salon downtown Atwood, had contacted me of Jace’s decision and I was happy to cover his event. I was truly amazed when I met Jace and saw his hair. When Aimee measured it before it was cut, it was 23 inches long. His hair was thick and like silk. You could tell he was taught to take good care of his hair.

Because I know absolutely nothing about being a beautician, I was in awe watching Aimee start by measuring Jace’s hair, then she sectioned it off and put a rubber band to hold it in place and another rubber band where the length was going to be when it was done. Then she braided the sections. As Jace looked in the mirror, Aimee cut the first braid. Surprising to me, Jace had a smile on his face. He was pleased with his decision to donate his hair and wanted to leave it long enough to get a head start on doing it again. When his hair was cut, it was 8 inches long, still beautiful and very manageable.

He decided to donate his hair to Children with Hair Loss in memory of his grandmother, Maria Cole. What a caring and compassionate gesture for a young child.

Jace is the son of Connie & Brett Hutchcraft. His siblings include: Jewelyonna, 14, Shonna, 12 and Ayden, 11.

Aimee and Theresa Eccles, former manager of Casey’s, donated money for Jace to get a t-shirt, patch and certificate. I delayed this article hoping he would get his certificate so we could get a picture, but it is taking a while to receive and I wanted to give him the recognition he deserves.

Jace impressed me with such a caring demeanor. He is learning at a young age the importance of giving to others. He brings new meaning to the statement, “A random act of kindness can change the world.”