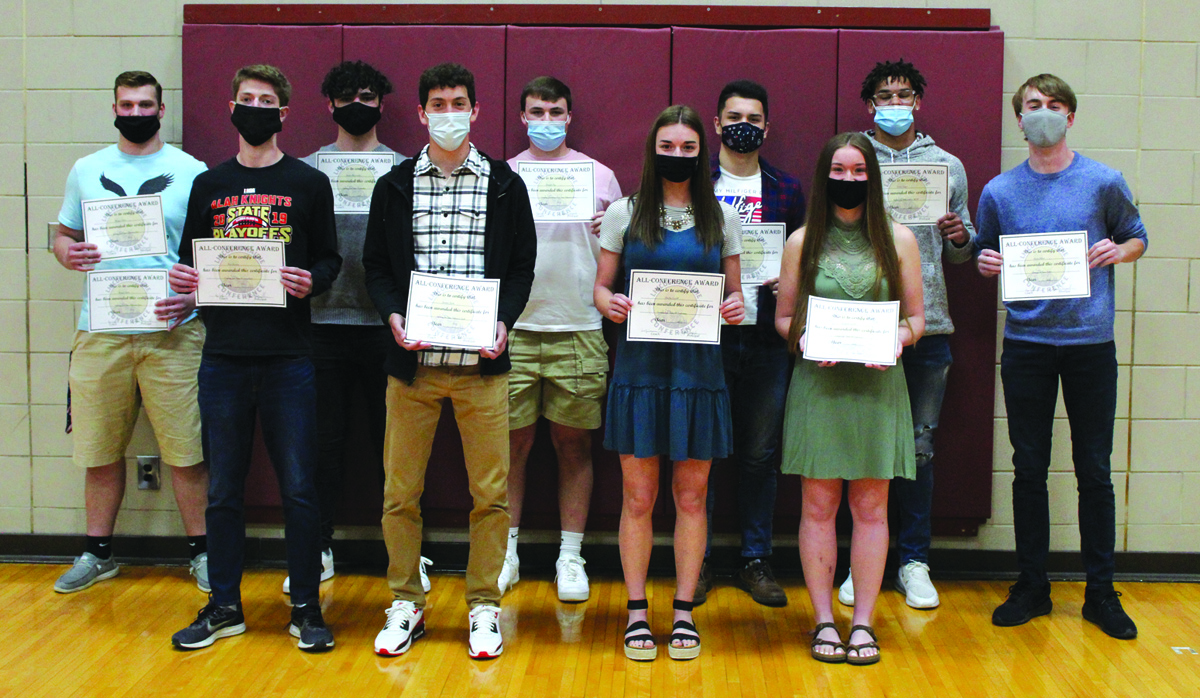 On Saturday, May 8 the athletes in the usual fall sports that this year competed in what was the IHSA spring season were recognized for their achievements during their seasons. Arthur Lovington Atwood Hammond Athletic Director Nathan Seal opened the awards night by welcoming everyone to “our spring/covid/fall awards night.” He talked about the differences of this year but said, “in the end you played and this is something to be thankful for.” Mr. Seal told the athletes “you play because you love the sport, you love to compete and you love to work with your peers that have similar goals. You put in the work and the time to get better because you wanted to. And that’s what sport teaches you-to give it your all.”

He asked the athletes to look around them and said this is what athletics is all about “your friends, the relationships you’ve formed and the memories you will take with you. In 20 years you won’t remember your teams’ record, but you will remember the people that you’ve formed these bonds with while being an athlete at ALAH.”

Mr. Seal then gave thanks to Miller Transportation for accommodating us during this crazy season and being very flexible; Chris Dansbery-athletic trainer; to the high school faculty and Board of Education for your support of our athletic programs; Mrs. Schrock, Mrs. Hood and Mrs. Seegmiller in the office for everything you do for our athletic programs including making announcements, helping with awards. Answering questions, assisting with bus scheduling and countless other things; Mrs. McGrath Mrs. Creek and Mr. Cheek in the unit office for your help and guidance; the Arthur Graphic Clarion, the Record Herald, News Progress, News Gazette, Herald and Review, WCIA and WAND for you coverage this season; parents-the support you provide-driving to games, washing the uniforms, picking up from practice, and all the other countless things you do-you are vital to the success of our programs; game night crews-scorebooks, clock operators, announcers, the students who volunteered to play music at the games, those that shagged balls at soccer, chain gang crew; Doug Davis and Matt Schrock from the RoundTable; custodial and maintenance staff; ticket takers and concession stand workers; all of the coaches-Thank you for your energy, passion and commitment to our student athletes; and last but certainly not least, thank you to our student-athletes for representing our school and communities so well this season. It truly was a pleasure to watch you compete and perform.

Up first for season summaries was Head Soccer Coach Kathy Frye who summed up their season by saying it wasn’t the way they wanted it to go just getting to play nine of their fifteen scheduled games, and ending with a record of 2-6-1 but just getting to play and having the last game they played be a victory made it special. Mrs. Frye then introduced Coach Dana Tinkle, assistant volleyball coach who spoke for Head Coach Emily Crossman who was unable to attend. Coach Tinkle said that every practice and game was a gift and a blessing since at one time even having a season was in doubt. The JV record of 2-11 wasn’t what they wanted but the coaches agreed the growth of this team was outstanding! The varsity record of 9-5 proved the girls were up for a challenge and in every game they gave it their all. She said the word to describe the varsity squad was Heart. Coach Tinkle then introduced Head Football Coach Ryan Jefferson. Coach Jefferson gave the football program’s season record of 9-3, 4-2 varsity and 5-1 jv, making it the best in many years. He spoke about being grateful to get in all six games on both levels and thanked Mr. Seal especially for his work in scheduling the games for the jv when some of the varsity teams didn’t have a jv squad. He also introduced his coaching staff, Don McCarthy, Jory Borntreger, Shawn Davison, Tyler Cotton, Danny Ruyle, and Keaton Greene and talked about the continuity they provide for both the varsity and jv teams. Coach closed by saying he is getting ready to get back to work soon with the promising group that is coming back.

The various sports went to different designated areas to do their individual awards.