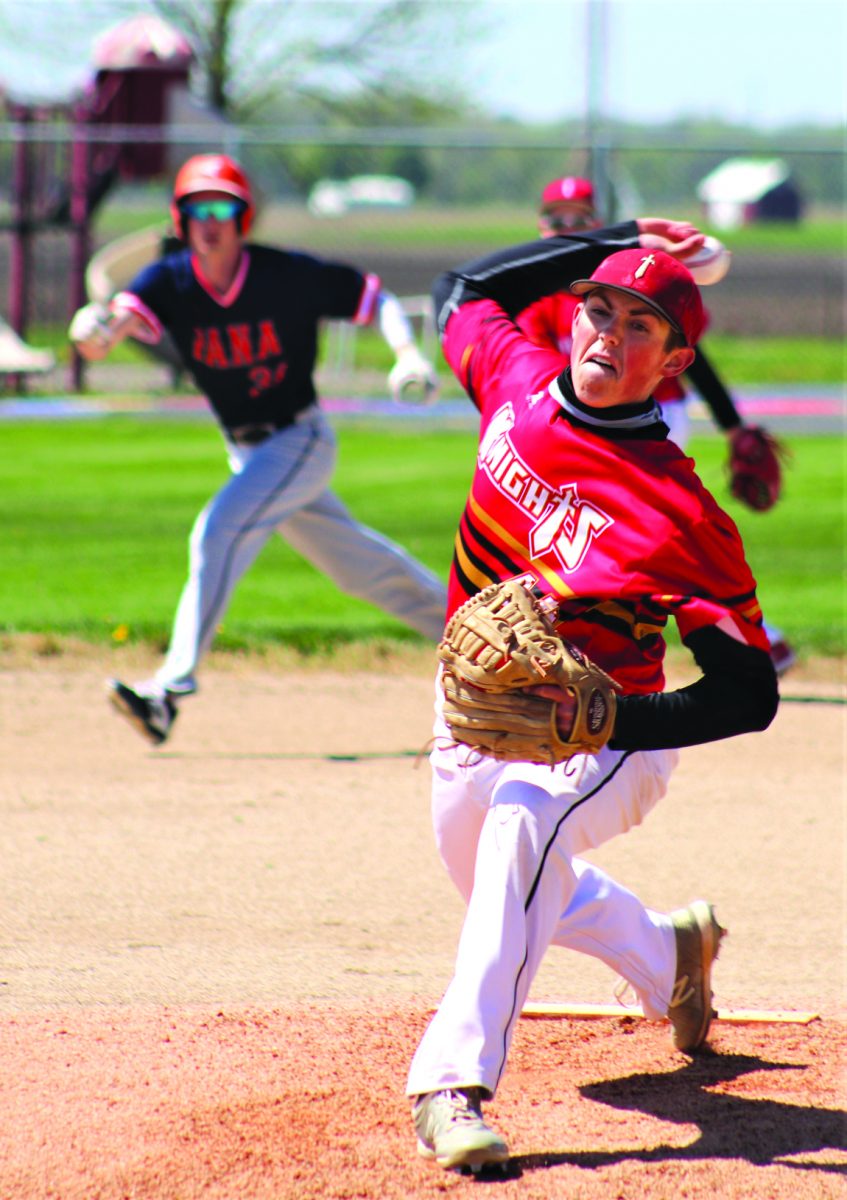 On the mound for the Knights is Wyatt Hilligoss as he fires to the plate as ALAH hosted Pana at home on Saturday.

The Arthur Lovington Atwood Hammond Knights had a busy week with four games on the schedule.

On Monday ALAH hosted Mt. Zion and the Braves ran away with the early lead as the Knights fell behind early and couldn’t come back in the 6-2 loss.

Mt. Zion scored on a walk by Aidan DiTommaso, a groundout by Bryce White, and a single by Dylan Roberts in the second inning.

Nik Miller went 0-for-3 at the plate as Miller led the team with one run batted in.

Jacob Bailey was the winning pitcher for Mt. Zion.

The Knights were at home again on Tuesday taking on Casey-Westfield. Brayson Chrysler led the Casey-Westfield to victory on the pitcher’s mound. The pitcher went three innings, allowing two runs on five hits and striking out three.

Logan Brough went 2-for-4 at the plate to lead the Knights in hits.

Casey-Westfield had 11 hits in all and didn’t commit a single error in the field.

On Friday ALAH traveled to Cumberland to face the Pirates and fell short 5-6.

Cumberland got things moving in the first inning scoring one run when Brennyn Cutts doubled. The Pirates picked up three runs in the third inning driven by a single by Gavin Hendrix and a home run by Cutts.

The resilient Knights fought back after trailing by four runs in the third inning scoring two runs on a single in the fourth inning and tallied three runs in the fifth inning but came up short.

Wyatt Hilligoss led the Knights with two hits in three at bats. ALAH was sure-handed and didn’t commit a single error as Borntreger made the most plays with six.

Brady Borntreger took the loss for ALAH. He allowed one hit and one run over two innings, striking out four.

Cutts led the Cumberland to victory on the hill and the Pirates had nine hits in the game.

Back home on Saturday morning for senior day, the Knights hosted the Pana Tigers as they stole the lead late and defeated Pana 7-5.

Pana got things moving in the first inning, when an error scored one run and built their lead to 5-0 at the end of the fourth.

ALAH put up five runs in the fifth inning as the offensive onslaught was led by Brady Borntreger and Wyatt Romine, all driving in runs in the inning. With the game tied at five, the Knights were batting in the bottom of the sixth when Logan Brough singled on the first pitch of the at bat, scoring one run.

Clay Seal earned the win for Arthur Lovington Atwood Hammond Knights as the southpaw surrendered one run on one hit over two innings, striking out three. Wyatt Hilligoss started the game for ALAH and righthander went five innings, allowing four runs on six hits and striking out seven.