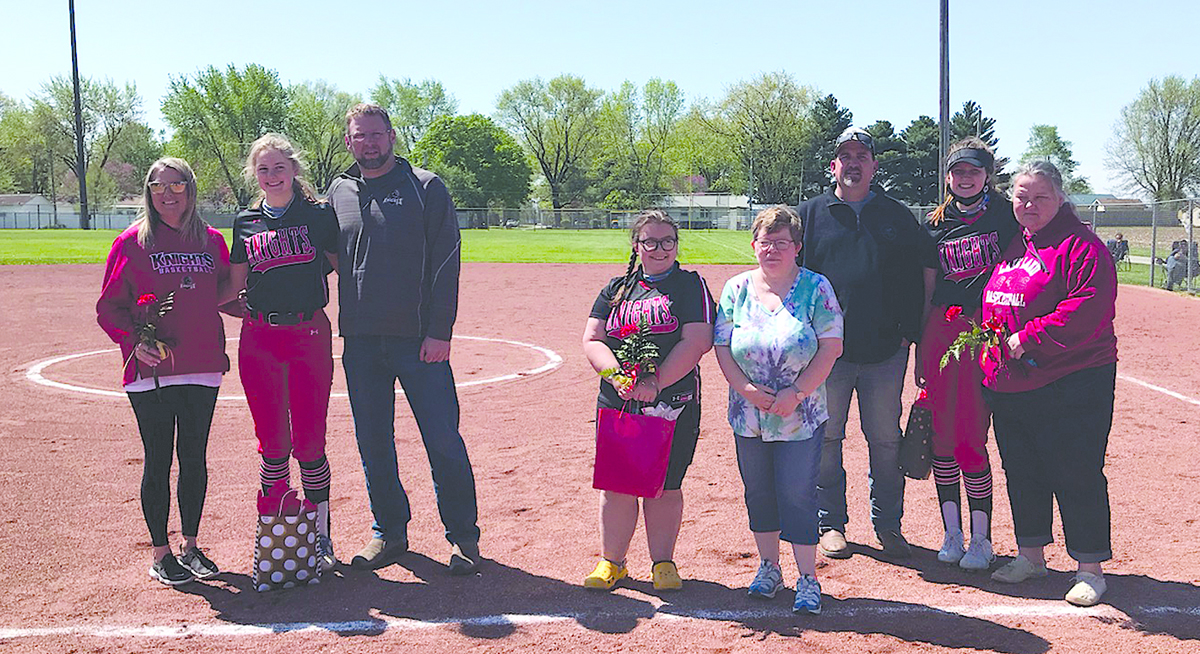 ALAH Girls’ Softball Senior Players Honored. Three ALAH senior girls’ softball players were recognized before their game in Atwood on Saturday morning, May 1. Left to right are: Makenzie Brown and parents Lisa Hood and Andy Brown; Cassidy Bissey and mother Kathy Bissey; Mackenzi Bowles and parents Ryan and Jami Bowles. Each senior girl presented their mothers with a red carnation and the girls were given a gift from the team. Winning the game against Pana 3-0 made the day even more special for the seniors, as well as the entire team.

In a double-header at home on Saturday, April 24, the Knights split taking the first game 2-1 but losing 4-10 in game two.

Both teams were strong in the circle in game one as Makenzie Brown allowed just five hits to St. Joseph-Ogden’s in a pitcher’s duel.

ALAH got things moving in the first inning scoring one run when Brown singled.

Brown led things off in the pitcher’s circle for the Knights as the righthander went seven innings, allowing one run on three hits and striking out 16.

Sophia Martlage led things off on the rubber for SJ-O. She surrendered two runs on six hits over six innings, striking out two and walking zero.

Peyton Jones went 3-for-3 at the plate to lead the Spartans in hits and they didn’t commit a single error in the field.

Struggling to get their offense going in game two, the Spartans easily defeated the Knights by a score of 10-4.

Arthur Lovington Atwood Hammond got on the board in the first inning when Kailee Otto singled on a 1-2 count, scoring one run.

Alyssa Acton led things off on the rubber for St. Joseph-Ogden. The fireballer surrendered four runs on seven hits over five innings, striking out three and walking one.

Traveling to Warrensburg-Latham on Tuesday to take on the Cardinals, Makenzie Brown didn’t allow a single run in the Knights 13-0 victory.

Kaci Beachy led Arthur Lovington Atwood Hammond to victory by driving in five runs going 3-for-4 at the plate. She drove in runs on a home run in the third inning.

ALAH scored ten runs in the sixth inning with big bats led by singles from Charley Condill, Brown, Ryli Kauffman, and Cheyenne Chupp, doubles by Kailee Otto and Alisha Frederick, and a walk by Regann Bowles.

Brown took the win in the pitcher’s circle for the Knights as the righty went six innings, allowing zero runs on one hit, striking out 16 and walking one.

Warrensburg-Latham’s Linley Southern hit a double in the third inning.

Kora Speasl was in the pitcher’s circle for Warrensburg-Latham. The pitcher allowed ten hits and six runs over three and two-thirds innings, striking out three and walking one. Carmen Howard threw two and a third innings in relief out of the bullpen.

Southern led Warrensburg-Latham with two hits in three at bats.

On the road Friday night at Cumberland, Knights Makenzie Brown had all the right stuff allowing zero runs and besting Cumberland by a score of 11-0

ALAH got on the board in the first inning as Brown drove in two when she homered.

Putting up five runs in the fourth inning, the offensive firepower was led by Alisha Frederick, Kailee Otto, Ryli Kauffman, Cheyenne Chupp, and Madison Schweighart, all knocking in runs in the inning.

Brown earned the victory on the rubber going five innings, allowing zero runs on one hit, striking out 13 and walking one.

Arthur-Lovington/Atwood-Hammond Knights Varsity tallied three home runs on the day coming from Brown with four bagger in the first inning, Condill put one out in the fifth inning, and Frederick went for the long ball in the fifth inning as well.

The Knights saw the ball well today, racking up 17 hits in the game. Condill, Frederick, Kauffman, Brown, and Schweighart all managed multiple hits with Condill lead the way in hits.

ALAH was sure handed in the field and didn’t commit a single error. Condill had the most chances in the field with 13.

Martinez took the loss for Cumberland going three and two-thirds innings, allowing five runs on eight hits, striking out seven and walking one. Lewis started the game for the Pirates and the hurler surrendered two runs on three hits over one-third of an inning.

Mitchell led Cumberland with one hit in two at bats.

Back home on Saturday, the Knights hosted the Pana Tigers for senior day as two Knight pitchers combined to throw a shutout.

While the pitching was strong on both sides, ALAH pitchers struck out 18 , while Ladage for Cumberland sat down five.

ALAH got on the board in the first inning when Brown doubled on a 3-2 count, scoring one run. She led the Knights with three hits in three at bats.

Ladage took the loss for Pana. The pitcher surrendered three runs on seven hits over six innings, striking out five.