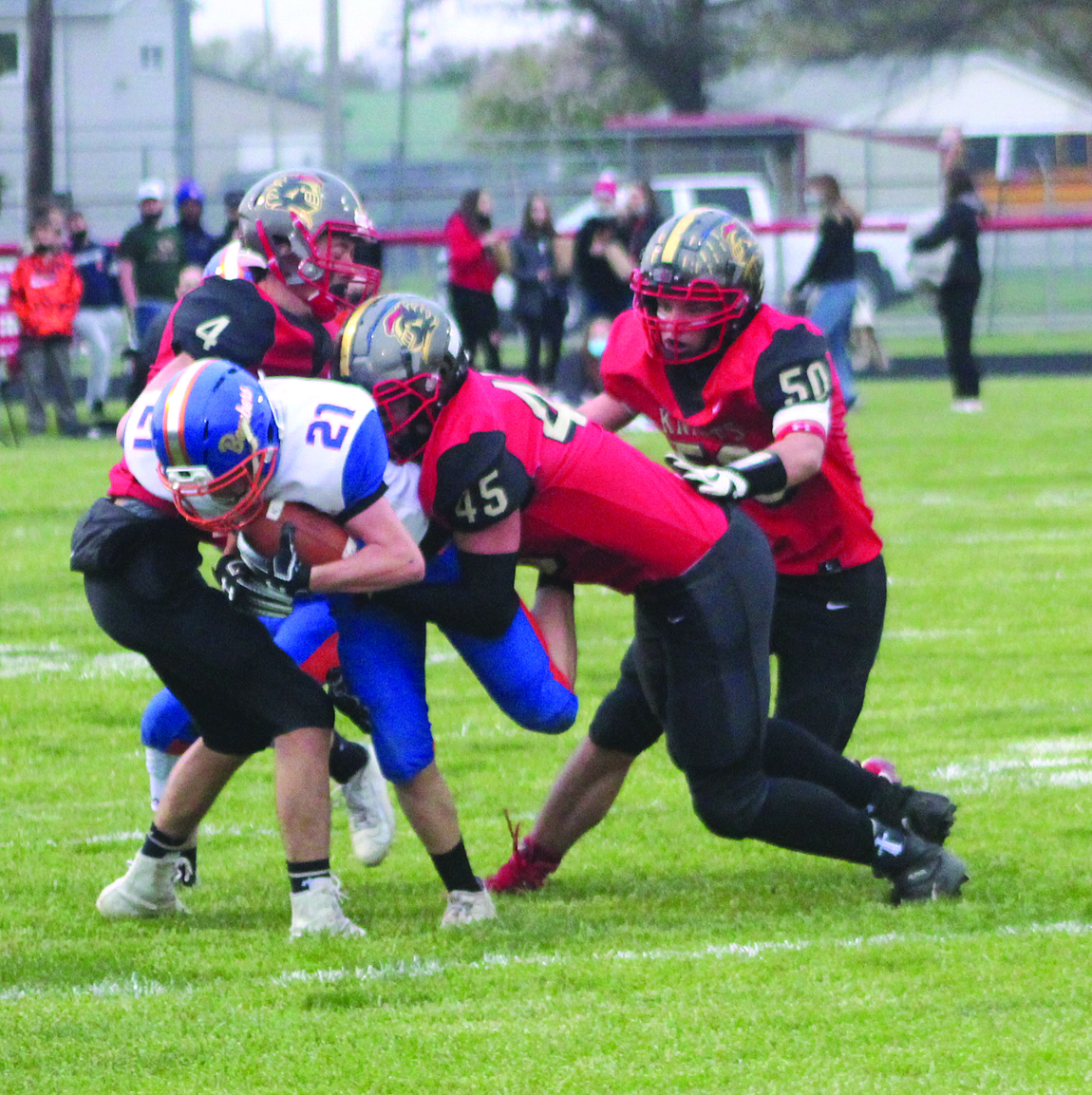 Jamison Rocke, 4, Austin Abercrombie 45, and Jack Martin, 50 take down Argenta-Oreana’s running back, Kolbe Brown in the game last Friday night at Wilson Field. The Knights finished their 2021 season with a 42-6 win over the Bombers.

A-O won the coin toss and elected to defer to the second half giving the Knights the ball first to start the game. Billy Fifer gained 8 yards on the first play, Finn Davison, 9 and Kaden Feagin a big run of 31 yards. This put the ball on the 6 and Fifer would take it into the end zone on the fourth play of the game. Aaron Likens kicked the extra point and the home team led 7-0 in just one minute and fifteen seconds of play.

The Bombers had to punt after just four plays and the red, black and gold was on offense again. It only took two plays to score this time. After a Fifer 11 yard run, Finn Davison scored on a huge 54 yard touchdown run. With Likens’ kick, ALAH led 14-0 with 7:54 left in the first quarter.

A-O’s next series ended with another punt but this time the Knights gave up the ball on an interception by A-O’s Kolbe Brown. They immediately gave the ball back to the Knights when Jack Martin recovered a Bomber fumble on their very first play at their own four yard line.

Three plays later and Fifer would have his second td of the game on a 1 yard run and after a Likens kick the score was 21-0 in favor of the Knights.

Neither team could get anything going in the second quarter and the half would end with the home team up 21-0.

The visitors received the second half kickoff and on a fourth down and inches play an errant snap went off the Bombers’ QB’s hands like a volleyball set high into the air. The ball hit the ground and was scooped up by ALAH defensive lineman, Brayden Fay and he took it 28 yards all the way to the end zone for a touchdown. Another EP kick by Likens and the lead was 28-0 with 9:37 remaining in the third quarter.

A-O would score on their next possession after a 47 yard run by Kolbe Brown took the ball to the Knights 22 yard line. A 17 yard gain by Kameron Bone made it first and goal at the 5.

A couple of defensive stops by the Knights made it third and goal from the 7. QB Brock Lyerly took the ball into the end zone but the extra point failed and putting the Bombers on the board with 6, making the score 28-6.

The Knights answered with a drive that started on their own 41 and ended with yet another Fifer score, this time of 6 yards at the 3:10 mark of the third. Likens hit another extra point kick and the score was 35-6 with ALAH leading.

The ALAH defense forced a Bomber punt and once again the Knights had the ball at midfield. A huge run of 27 yards by Feagin on a fourth and sixteen play put the ball at the 9. Davison would take it the rest of the way for his second score of the game. Likens finished his kicking perfect on the night going 6 for 6 on his extra point attempts. The last score of the 2021 season would come with 9:18 left in the game.

The Bombers had two more series but couldn’t get anything going. The Knights’ last series featured a penalty for too many men on the field when Coach Jefferson put the twelve Seniors on the field and QB Jamison Rocke took a knee. Ben Carroll, the thirteenth Senior was unable to be on the field for the play due to knee surgery but was a part of what has become a Coach Jefferson tradition of having the Seniors form a congratulatory line after the game so coaches and teammates can have a chance to thank them for all their efforts over the past season and their football careers. This Senior class will be missed as Coach Jefferson said, “they built and paved the way for the future of Knights’ football”.

Arthur Lovington Atwood Hammond finished the season with a 4-2 record, good for third place in the Lincoln Prairie Conference and were extremely grateful to have been able to play all six of their games without any interruptions. The team would like to thank everyone for their support throughout the season.