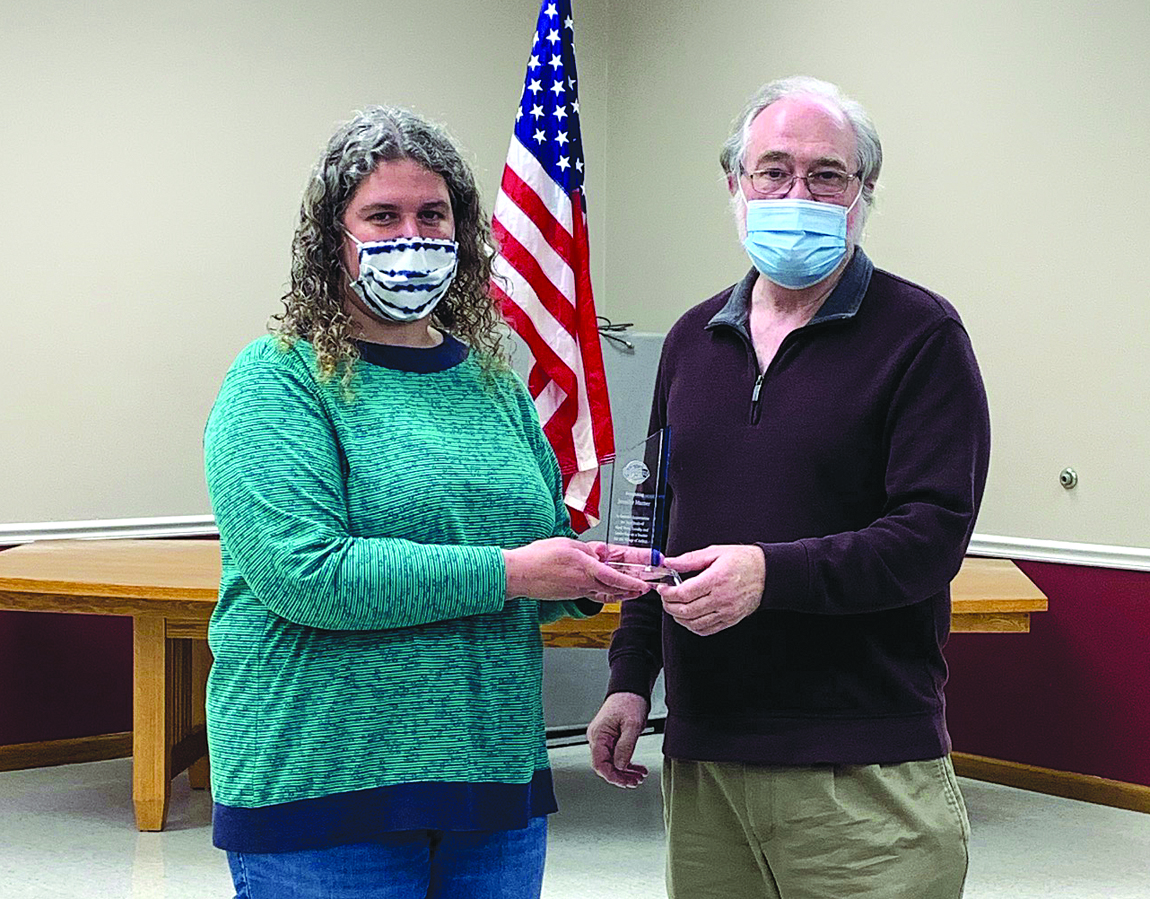 Trustee Jenni Marner was recognized for her public service to the community and being a participant in the village government. Mayor Rod Randall presented her with an award during a small ceremony at the end of the board meeting.

Some members of the Rotary Club returned to the Arthur Village Board meeting on April 19 to further discuss and present a more detailed outline and plan for the annual firework show. Rev. John Stewart and club President Julie Paddock were both present. Stewart noted that he had spoken with Chief Goodman, Christy Miller, Kenny Crossman, the park board and Moultrie County Health Department about the event.

Stewart informed the board that they would be selling wristbands both for presales and at the various entrances to Jurgen’s Park. There will be certain areas that will be fenced off to help with crowd control. There will be fencing off the gravel parking area from south of the pool house to the west of the merchant’s building. Three entrances will be available for people to enter: main ballpark, west diamond and the south parking area. The color of the wristbands will represent the area in which the person is located in (for example: blue wrist bands for main pall bark, red for west diamond, etc). Each entrance will have signage noting that masks and social distancing is encouraged. Vendors will also be present for the event.

As noted in the previous meeting, Chief Goodman informed Stewart that this event will require more security and help than they’ve had past years. Goodman said he would reach out to other local service organizations for assistance. Both ground security and security out past Spruce Street will be required. The Rotary is planning on beginning preseales locally June 1. It will be unknown whether Illinois will be in the “Bridge Phase” of the pandemic or not until the time gets closer. The phase that Illinois will be in will determine the amount of tickets that can be sold. Once that number of tickets is reached, there will be no more sales.

“I think this will be a good template for the years to come. I like the presale idea. That way we will know how many will be there. It will set us in a new direction for the years to come that will make it even better when we are all full capacity,” commented President Paddock.

After some discussion, the Arthur Village Board voted to pass the Rotary Club’s plans to host the annual Arthur Firework Show.

Other news that was presented/voted upon:

•The board approved Herschberger Concrete to make some repairs throughout town in the amount of $11,460.

•It was approved to put out Third Saturday Craft Market signs on Fridays and then be picked up on Saturdays. Signs will be placed near the school, downtown gazebo, front of the Post Office, bank, intersection and one on Columbia Street. Every third Saturday, there will be a craft bazaar at the Otto Center.

•Additional signage was approved for the Arthur Community Building’s Veteran display. Later, a variety of war scenes and borders will be painted around it.

For the Police Report, Chief Goodman informed the board that he is currently working on a grant by the state of Illinois standards. The grant will be for body cameras which is due by May 15, although he said they won’t be making the transition for body cameras for another couple years.

Matt Bernius commented that a fire hydrant had been hit by a car which also created another sewer line project. He thanked his guys for their extra hard work on the incident.

Trustee Jenni Marner was recognized for her public service to the community and being a participant in the village government. Mayor Rod Randall presented her with an award during a small ceremony at the end of the board meeting.

“The past four years have gone by quickly. It has been a privilege serving on this board with Jenni Marner these past four years. She attended every meeting, did her homework before the meetings, asked thought-provoking questions, and has kept the best interests of our community in her mind and actions. I have appreciated the support I felt from Jenni and the conversations we have had together concerning community issues. I am glad that Matt (Bernius) initiated the idea of presenting a token of appreciation to those who have performed public service, especially the kind of public service that Jenni exemplifies- commitment, concern for the well-being of the community, and the leadership with a spirit of cooperation. Thank you for your service as a member of the Village of Arthur Board of Trustees. I am certain this will not be an end of your service to the community.”