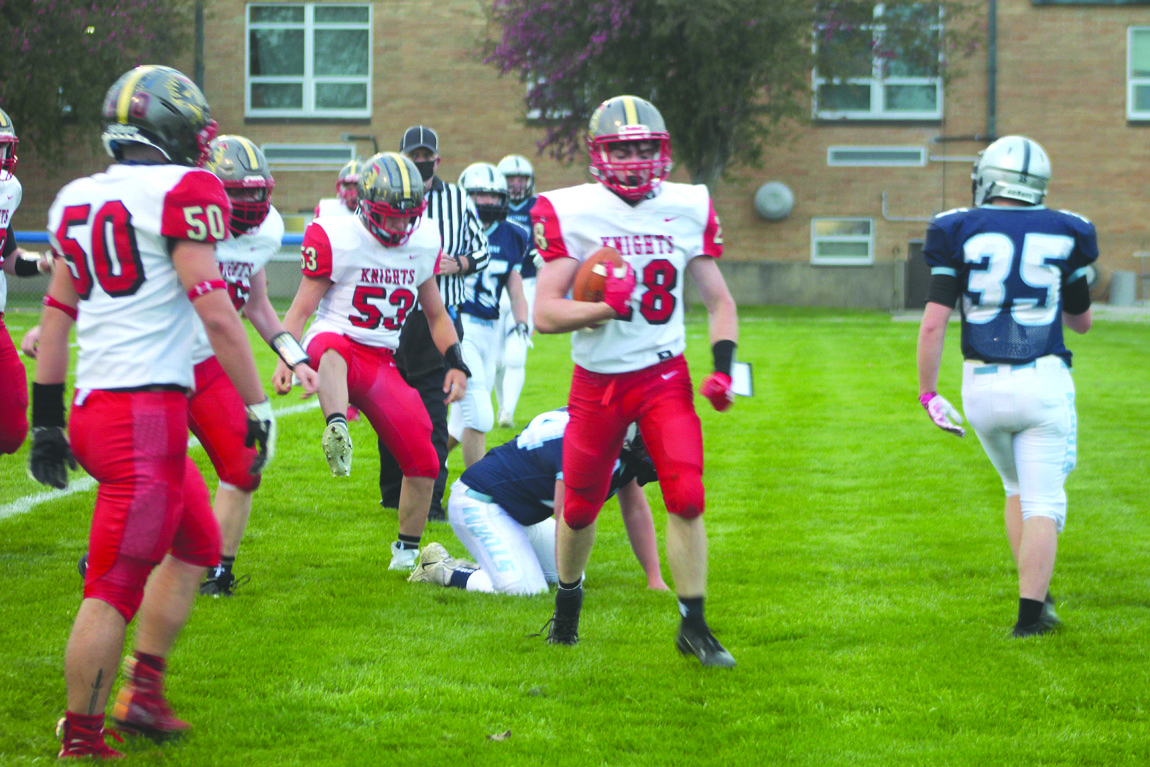 Junior running back, Max Allen #28 carries the ball into the end zone for the first touchdown of the game last Friday night at Niantic. #50 Jack Martin and #53 Rene Juarez Cuevas were helping to block for Allen on the play. The Knights would defeat the Storm by a score of 34-0 and are now 3-2 on the season with one game remaining in the short spring season.

The Knights came away with the victory and are now 3-2 on the short spring season with only one game left on the schedule. That game will be at home against the Argenta Oreana Bombers on Friday, April 23.

ALAH went into the game a little banged up. Running back, Kaden Feagin was out with an ankle sprain and regular starting quarterback, Brady Borntreger played at a different position after suffering an injury at Arcola last week. Jamison Rocke who had finished the Arcola game as the signal caller stepped up once again and started the game at Niantic.

The Storm received the opening kickoff and went on a long drive that took almost seven minutes off the clock but the Knight defense sacked the QB Travis Hemphill on a fourth down play to stop the drive with 5:43 left in the first quarter.

The Knights’ first possession would set the tone for the entire game. Running the ball with Finn Davison, Billy Fifer and Max Allen, they moved the ball to the 5 yard line where Allen took it into the end zone for the first score of the game. Aaron Likens kicked the extra point and the visitors led 7-0 with 3:14 remaining in the first.

Sangamon Valley’s possessions were also very much the same each time with them picking up a few first downs, mostly with their passing game but never getting the ball closer than the Knights’ 24 yard line. All of their series ended with them turning the ball over on downs except for two in the second half when ALAH defensive back Jamison Rocke picked off a Hemphill pass and a blocked punt by Keegan Ashenfelter and Drew Cotton.

The Knights kept pounding the ball down the field and scored four more touchdowns in the game. Billy Fifer scored on a 10 yard run early in the second quarter and picked up another td on the Knights’ first series of the second half. Aaron Likens kicked one extra point but missed the next one and the lead was 20-0 with 8:43 left in the third.

ALAH’s other two scores camo on a 5 yard run by Jamison Rocke with 2:28 left in the third and Finn Davison’s one yard run with 1:00 remaining in the game. Likens kicked both extra points making the final score 34-0 in favor of the red, black and gold.

For the special teams, Aaron Likens had 6 kickoffs for 245 yards and was 4 of 5 on PATs.

Brady Borntreger had one punt of 31 yards. Finn Davison returned the only kickoff that SV made at the beginning of the second half for 9 yards.